Latin, the Church and Hobbits 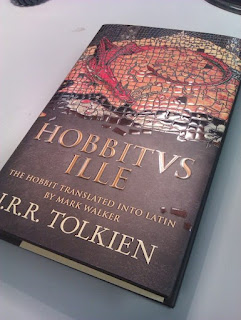 Just picked up that the Hobbit has been translated into Latin. (H/T Remedia Fernandes.) I'll almost certainly go ahead and buy it, even if the comments (and examples) given by Alatius in a forum discussion do suggest the translation is less than ideal.

While these translations of modern classics into Latin are a great deal of fun (well, they amuse me!), they do raise a general point about the place of Latin in the Church. Most Catholic discussion of Latin focuses on the liturgy and particularly the never ending struggle between the Extraordinary and Ordinary Forms of the Mass. That's not really something I want to get involved in: I simply follow Benedict XVI and particularly Summorum Pontificum in wanting both to be freely available.

However, the issue of Latin in the Church is wider than its liturgical use. For one thing, if Latin is to be widely used liturgically again, what does that entail for the proper education of priests and even more so, the laity? (I say 'even more so' because, while it seems obvious that priestly formation would have to include Latin, the issue of more Latin for the laity doesn't seem to have been widely addressed. Are Catholic schools boosting the Latin content of their curriculums?) The foundation of a Pontifical Academy for the promotion of Latin whilst excellent in itself then raises the question of what it will practically do to boost knowledge and use of Latin in the Church on the ground.

I was at the tail end of the generation that received some grounding of Latin in state schools. I don't know of any state schools that still teach Classical Latin and Greek in Scotland. There may be some, but a quick google and personal anecdote suggest that any that do will be rarae aves: certainly, none of my children have been offered the subjects.

The absence of Latin cuts off Catholics from a serious engagement with the pre-Vatican II Church. Certainly,  to get a good academic understanding of scholasticism, you need some familiarity with Latin. At the very least, failure to get such a grounding provides a psychological block to engaging with the pre-Vatican II Church: books and papers that relied on a familiarity of the reader with Latin become difficult to use; the constant use of technical phrases in a language that is little more than squiggles to the reader becomes irksome. Most importantly, the inevitable differences between English translations of fundamental Latin technical terms makes exact understanding of philosophical and theological terminology difficult.)

Without any Latin, the possibility of a hermeneutic of continuity is made much more difficult: the pre-Vatican II Church becomes linguistically foreign and recedes out of sight. It is perhaps the decline of the non-liturgical knowledge of Latin that is even more important than the decline of the liturgical use (even if the two are linked). A Church that has abandoned the scholarly use of a language that was the exclusive medium for its thought for most of the two thousand years of its existence is not and cannot be serious about continuity. It cannot, moreover, be entirely serious about lay understanding of theology if any knowledge of the language is confined to priests and a few specialized lay academics.

By 2050—earlier, probably—all real knowledge of Oldspeak will have disappeared. The whole literature of the past will have been destroyed. Chaucer, Shakespeare, Milton, Byron—they'll exist only in Newspeak versions, not merely changed into something different, but actually contradictory of what they used to be. Even the literature of the Party will change. Even the slogans will change. How could you have a slogan like "freedom is slavery" when the concept of freedom has been abolished? The whole climate of thought will be different. In fact there will be no thought, as we understand it now.