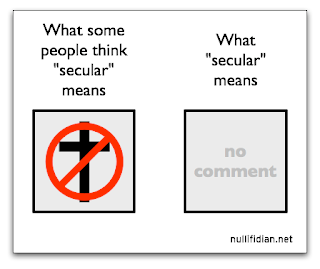 I indulged in a slight flurry of online commenting in response to a letter in The Scotsman from Neil Barber, a leading light of the Edinburgh Secular Society: Neil claimed:

We have neither the wish nor the right to judge the metaphysics of our fellows....

An atheist might well debate the rationality of those beliefs, but a secularist wishes only for religion to be disentangled from the mechanics of the state.

I'm not sure whether Neil really thinks this or whether he is just pretending. As I pointed out in my comments on the letter, if you go to the Edinburgh Secular Society website, you soon find all sorts of helpful anti-religious links and campaigning materials. I commented:

...there is an intimate relationship between ESS and campaigning atheism. For example, although there are many links to humanist organizations on that links page, there are none to theistic organizations....

As another example, all the blogs to which you link are run by campaigning atheists, [For example, the last entry on your chair's blog shows him] speaking in favour of the motion, ''Belief in God is a delusion'.

I have no doubt that secularism (in some senses) can be a position which, in principle, is not an attack on religion. However, in fact, certainly as represented in the ESS and NSS it is simply an arm of militant atheism.

Let me draw a distinction. In principle, I accept that secularism might not be an anti-religious position. (I'll come back to this in a moment.) But in fact, there is ample evidence that secularist movements in the UK are dominated by an anti-religious agenda. A lovely example of this is the website of the Cambridge Secular Society, where, in obvious contrast to the pictorial claim at the head of this posting, you'll find this as their logo:

On that site, you'll also find, on the Home page, not buried away in some forgotten corner:

Religion flourishes where ignorance abounds and remains the cause of conflict and terrorism, in Palestine, Iraq, Pakistan, India and elsewhere. It is implicated in many scandals and atrocities including the sexual abuse of children and the execution of apostates yet still we are urged to accept its moral authority.

Secularists had either better clean their act up or simply come clean that they are really just atheists who are trying to attack religion in a rather less obviously threatening way.

So much for the facts of the secularist movement. What about in principle? Here, as I've noted before, it does all depend on what you mean by secularism. It might mean separation of Church and State. But then -see previous link- even mediaeval Catholicism accepted that: the State and the Church are not the same. It can't mean -unless religious organizations are booted out of the country- that there is no interaction at all between religions and the State. So we are left with the debate about precisely what relationship there should be between them. Now that's a long and detailed argument and I can see many arguable positions about that relationship. But overwhelmingly, modern secularists are motivated by the thought that religion is harmful and that it why it needs to be kept out of the public space as much as possible. For example, Neil Barber stated in public on the accession of Pope Francis:

"There's been lots of talk about how the Catholic Church has to change, but the problem is that, for a lot of Catholics, change is the very last thing that they want.

"I wish them well, but my concern is that attitudes that are so woefully out of touch shouldn't have the sort of power that they have in public life."

Note the reasoning: Catholic beliefs are out of touch and that is why they should be kept out of public life.

Now there isn't any necessity for such a conclusion unless secularism is simply atheism with a bit of slap on. If the 'secular' State were not intrinsically anti-religious, it might well encourage religions and their communities to be part of the public sphere, without giving preference to any one. As noted by Bhikhu Parekh:

The standard liberal doctrine of the division of spheres according to which unity is required in the public realm and diversity confined to the private or civil realm does not work even in a monocultural society, and causes much positive damage in a multicultural society. Since cultural differences run deep and permeate all areas of life including the political, there is no transcultural public realm in which unity can be located. Furthermore the attempt to combine a monocultural public realm with a multicultural private realm tends to subvert the latter. In every society the public realm enjoys considerable dignity and prestige, which generally far outweigh those of the private realm. When one culture is not only publicly recognised but also embodied in political institutions and practices, it comes to be seen as the official culture of the community, an expression of its collective identity, and commands considerable state patronage, power and access to public resources. By contrast the excluded cultures come to be seen as marginal, peripheral, even deviant and inferior, only worth practising outside the public gaze of society and in the privacy of the family and communal associations.

In modern societies with many religions and Weltanschauungen, clearly the old idea of cujus regio, ejus religio won't work. But there are many positions between the poles of the confessional state and a state completely free of religion. (There is, for example, much to be said for the current position in Scotland of a mild Protestantism occupying the position of the 'National Church', much more than there is for the religion free aspirations of the ESS et al.) Where you are situated on that spectrum will depend on your view of the social benefits of religion. And since the various secularist clubs are uniformly constituted of members who believe (to quote the ESS chair) that 'religion is a delusion' they will seek to extirpate its influence as much as possible.

In sum, secularism in the UK is, in fact, a wing of militant atheism. Its campaigning for the exclusion of religions from the public sphere rests, in principle, on the judgment that they are intrinsically harmful. The claims of secularists to be neutral on religion are thus, both in fact and in principle, baloney.