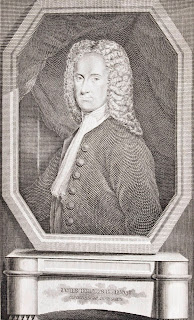 In 1603, James VI inherited the English throne. The monarchy left Edinburgh for London for good. Parliament followed in 1707. Scottish national identity coalesced around the two remaining great institutions – the Law and the Church. (Here.)

One's tempted to add critically discuss to the above passage, but it's a thought that's been both commonplace and has a certain obvious truth to it: in the period following the Union of Parliaments in 1707 and up to the reestablishment of the Scottish Parliament in 1999, the public face of Scotland -and a face with real clout and status- was seen in the separate Scottish legal system and the separate Scottish Presbyterian Church. Moreover, there has been at times a certain narrative floating around in Scottish life that Scottish public culture is characterized by a certain intellectual rigour, a tendency to argue from principles and to think systematically; and moreover that this tendency allows Scotland to be part of European intellectual culture in a way that our poor, deprived English neighbours, condemned to empiricism and ad hoc pragmatism cannot. Specifically, this general tendency in Scottish life is embodied in a Church that looks to Continental Geneva for a rigorous, systematic Calvinism rather than the messy political compromises of Anglicanism, and a legal system that looked to Roman Law and Leiden for a reasoning from first principles rather than the English Common Law practice of simply following previously decided cases.

Like most narratives, you could live out several academic careers picking it to pieces and building it up again. But it has enough truth for it not to be completely dismissed. Moreover, it has been a potent narrative, one that ran through a great deal of twentieth century Nationalism, and has had wider influence beyond the strict bounds of that movement.

Fast forward to 2013. In a recent article, Gerry Hassan rejoiced in the triumph of gay rights in Scotland:


Today Scotland is not a land of milk and honey, but in terms of gay rights we live in a different world. This needs to be widely recognised and understood because it tells us some important things about ourselves.

This is a land which gave power and status not so long ago to moral authoritarians and guardians who were our elect and elders, whether family, friends or church. It was a place where people were worried, anxious and felt diminished by authority, and perhaps even more insinuously, always felt they needed to look over their shoulder, worrying about the criticism or scorn of others.

Modern Scotland is a very different place: diverse, messy, pluralist and one in which authority is increasingly being more questioned and challenged.

This is Jetsonism is in full flight: the belief that the future will be shiny and full of rocket cars (but with the sad truth that really all you have produced is a second rate version of the Flintstones). There is a strain in modern Scottish politics and cultural life that erects Scotland on the grave of Scotland: only by killing off what characterizes Scotland can we be truly Scotland. And so Hassan talks about 'the dark place we have come from' as though it was all bad and that it will be all good. This juvenile optimism is the general problem. But specifically it attacks the two elements of the intellectual narrative I sketched above: the Kirk and Scots Law.

The case with the Kirk is clear enough. Instead of being an intellectual powerhouse which kept Scotland in the mainstream of European culture, it becomes merely an outpost of the Quivering Brethren. The case of Scots Law is more complex. Instead of a system which prides itself on principled reasoning based on sources within Roman Law and Natural Law, it becomes -what? A quaint set of customs, to be distinguished from Anglo-Saxon Common Law by some amusing details? A system based on Platonic reasoning which owes nothing to more concrete sources of jurisprudence? I don't think I've seen a single reference to either Roman Law or Natural Law in the pro-same sex 'marriage' side's arguments. Tactically, it's not surprising. Whilst the anti-SSM side has referred constantly to Natural Law, there's very little, either in Roman Law or the tradition of Natural Law, to provide comfort for the pro-SSM side:

The law of nature is that law which nature teaches to all animals. For this law does not belong exclusively to the human race, but belongs to all animals, whether of the air, the earth, or the sea. Hence comes that yoking together [conjugatio] of male and female, which we term matrimony; hence the procreation and bringing up of children.  (Justinian's Institutes. Lib. I, tit. II.)


If we turn to more directly authoritative sources of Scots Law such as Erskine's Institute, Jetsonists will have to hold their noses from the very beginning:

The word law is frequently made use of, both by divines and philosophers, in a large acceptation, to express the settled method of God's providence.

Having struggled past that, we find:

That there is such a law [ie Natural Law] cannot be denied without denying the essential attributes of the Deity.

Finally, we arrive at:

The relation between husband and wife is constituted by marriage; which may be defined, after the Roman Lawyers, the conjunction of man and woman in the strictest society of life until death shall separate them. (Book I, Title VI).

In other words, it's quite clear that, if you were going to take seriously Roman Law and Natural Law as sources, same sex 'marriage' would be extremely tricky to justify to put it mildly. But it's odd that this abandonment of the specificities of the Scottish legal and intellectual tradition has gone almost unnoticed.

You might have thought that, in the midst of possibly the greatest opportunity Scottish national pride has had to reassert itself politically, there would be a corresponding cultural revival. You might not expect everyone to be running around proclaiming a revival of interest in the Scottish intellectual tradition -Roman Law, Scholastic Calvinism etc- but you might expect some to be doing so. You might expect some glimmer of interest in how, say, the Scottish Enlightenment thinkers would have dealt with current issues of fundamental human concern such as marriage. But, of course, as soon as you actually go back and look at what they really say, unless you confine yourself to the atypical Hume, you bash into Natural Law and Roman Law and God. And we can't be having that now, can we?