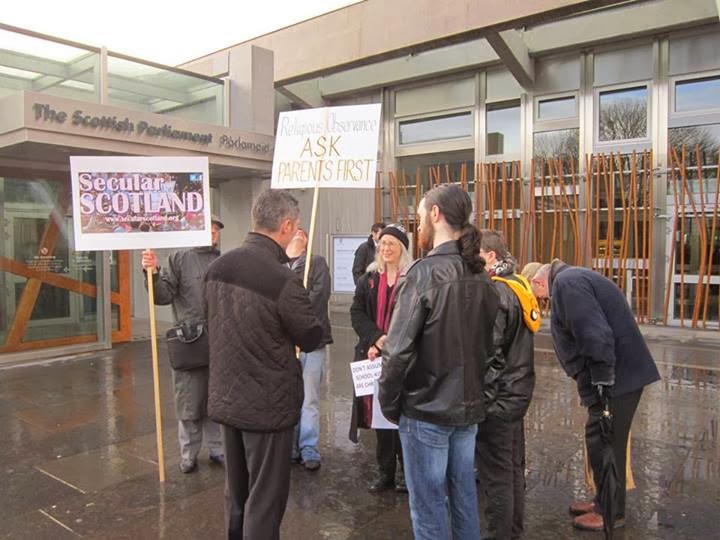 
Sometimes it's hard for an evil minded Papist not to snigger...

The publicity hungry machine that is Secular Scotland must have thought it was onto a good thing when it submitted a petition to the Scottish Parliament suggesting that religious observance be made voluntary in Scottish schools. However, the Humanist Society Scotland seems to have outflanked them by teaming up with the Church of Scotland to water down religious observance to 'time for reflection'. This agreement in turn seems to have broken down into a squabble between the Humanists and the Church of Scotland about whether this amounts to a substantive change (per the Humanists) or merely a name change recognizing existing realities (the Kirk). (Kirk statement. Humanist statement.)

Looking at it from the sidelines, it's hard not to regard this as an attempt by a large Christian body (the Kirk) and a large atheist body (the Humanist Society) to carve up Scottish non-denominational schools between them. This is certainly David Robertson's view (a well known Free Church of Scotland minister):

The only answer I can think of, apart from sheer stupidity, is politics and self-interest.  The clergy and bureaucrats who make these kind of decisions, know full well that their congregations are declining, that they are losing 20,000 plus members per year, that their finances are in severe trouble (with the pension scheme being tens of millions in debt and a significant number of the larger evangelical congregations leaving).  But they don’t really care.  There is enough silver to be sold off to keep them in jobs for a few years.  What they really do care about is the fact that with the rapid secularisation of society, the nice cosy arrangement they have had with the secular state is under threat.  What will they do if they are not allowed to be schools chaplains or other religious functionaries of the state?  How can they maintain the illusion of importance and significance?  When Secular Scotland began their campaign I thought it had no chance of succeeding just now, but I had reckoned without the spineless Machiavellian leadership of the C of S.  In order to preserve their positions they have done a deal with the humanists (who in turn of course are aspiring to be humanist chaplains).   For the Humanist society this also has the advantage of giving one in the eye to the newish Scottish Secular Society, who have proved themselves far more adept at advancing the secular agenda.

A more charitable view would be that it's an attempt to achieve a compromise position which avoids the organizational nightmare that the Secular Society's nightmare would result in, but would reflect the loss of the centrality of Christianity in modern Scottish life. As I've previously blogged, the existing guidelines on religious observation are pretty wishy-washy, and the Church of Scotland already accepts that:


...all Religious Observance should be genuinely inclusive of people of faith and no faith.  The Church knows that this is no easy task but it believes that it can be achieved and that in achieving it, something very significant is brought to the creation of a genuinely inclusive society where we each move beyond tolerance to deep respect, understanding and common living based on real self-understanding about our own beliefs and values. [PDF: Background briefing to Public Petitions Committee]

It's therefore not entirely surprising that the Kirk thinks that a simple name change to 'Time for reflection' is sufficient to make explicit this existing reality. On the other hand, the Humanists regard this as a matter of substance:

This would be difficult to achieve on our own and the Church of Scotland have previously expressed a desire to bring in Time for Reflection (TfR) as an alternative. To be clear TfR is not just a name change. It has the clear objective of removing acts of worship and any confessional nature that current religious observance practises [sic] contain. [Here.]

As in so much, the proof of the pudding will be in the eating. What will be allowed? What will be excluded? (The Kirk is proposing that only those who sign up to the 'equality and diversity' policy will be allowed in. As one of the commenters on David Robertson's blog noted, as worded, this exclusion prevents anyone holding -let alone preaching- views opposed to same sex 'marriage' from taking part in 'Time for Reflection'.)

I suspect that some sort of bland compromise is all that can emerge here. It makes for a pleasant daydream to imagine something with a genuine edge that might be acceptable to all parties (how about a selection of readings from Samuel Beckett on the awfulness of life without transcendent meaning?). Part of the problem is an evangelical antipathy to the idea of Christianity as a culture: if I were the Church of Scotland, I'd be tempted to argue for the historic importance of Presbyterian Christianity in Scotland and the impoverishment of the cultural experience of any pupil who had not encountered that culture through some sort of collective act of reflection in which it was privileged. Anyway, as I've previously said, if the choice is between time for reflection badly done and nothing at all, I'd go for the reflection badly done.

The Sunday Post has learned of a case in which a girl was told she would have to leave her Catholic school if she did not take part in a traditional church ritual.

The Scottish Secular Society claim they are aware of “several” cases in which pupils have been forced to change school.

Caroline Lynch, the organisation’s chairwoman, said: “It’s awful. One girl was told that if she didn’t learn part of the catechism then she’d be excluded.

“In the last two months I’ve heard from three sets of parents whose children have been threatened with exclusion or told they were not at the ‘right’ school.”


Quite what these people expect from a Catholic school is not clear. Learning the Catechism? The spirit of Torquemada clearly lives on in Scottish Catholicism.

Anyway, in my never ending attempt to provide a helpful contribution in times of difficulty, my suggestion for a suitable 'Time for Reflection' hymn (or perhaps 'her'):