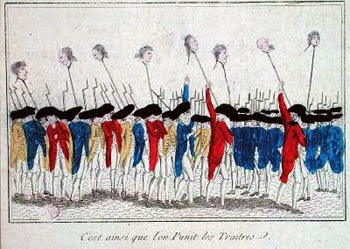 'This is how we punish traitors.'


One of the things I've rabbited on about fairly continually over the lifetime of this blog is the need for a layer of politics that takes a longer, less ad hoc approach to how we live in the polis. Instead of politics being simply the hurly burly knockabout of Ed's failure to eat bacon sandwiches properly, or Nigel's discovery that another one of his candidates is a former member of a Waffen SS re-enactment group, there needs to be a continual effort to create institutions and to act individually in ways that promote longer term, more rational reflection as well as the inevitable day to day scraps. (I'm not a naive purist about politics: they've always had more of a touch of the dirty and irrational and always will. And that's not totally a bad thing. But the current balance is wrong. Which I'm happy to admit often includes my current balance as well.)

As I mentioned a while back, I prepared for the Scottish referendum by reading my way through Sir Walter Scott. I am still reading my way through Sir Walter Scott (67% through per Kindle). Anyway, apart from the growing horror that modern Scotland simply isn't recognizing the genius of the man with anything like sufficient fervour (perhaps regular feasting on oxen, celebratory riots in the Grassmarket, the occasional sack of a minor English Border town?), Scott's work is a continual reminder of just how much British society (and even conservative British society) has changed. I was brought up short by the following passage from Tales of a Grandfather (Scott's history of Scotland for children) on the aftermath of the 1745 Jacobite rebellion:

Treason upon political accounts, though one of the highest crimes that can be committed against a state, does not necessarily infer anything like the detestation which attends offences of much less general guilt and danger. He who engages in conspiracy or rebellion is very often, as an individual, not only free from reproach, but highly estimable in his private character...The sense of such men's purity of principles and intention, though not to be admitted in defence, ought, both morally and politically, to have limited the proceedings against them within the narrowest bounds consistent with the ends of public justice, and the purpose of intimidating others from such desperate courses.

There is a typically Scott move here: a practical determination uninfluenced by anything other than realism (the need to punish to intimidate others) coupled with an understanding of and even sympathy with the individuals and their motivations. (I won't pursue this just now, but it's in part a linguistic richness we seem to have lost. Instead of morally 'thick' concepts such as 'treason' (or as I read in Burke recently, a lack of 'chivalry' as a criticism of the failure of the French to defend the woman Marie Antoinette), we're simply reduced to the yah! boo! of the modern tabloid or commentator.) The contrast struck me during the referendum campaign. It's currently striking me in the way that much of the media is treating ISIS and Muslims. Any attempt to understand let alone sympathize with the motivations of those who might support ISIS or commit acts of terror is branded as defending them. To suggest the need for understanding and explanation is, it's claimed, to introduce a 'but' into the condemnation and thus to forsake any moral standing.

And so, when CAGE tried to claim that 'Jihadi John' has been, at least in part, driven into the hands of ISIS by British security services, those of us who remember the effects of the sus laws or the effects of internment in Northern Ireland might suspect there probably is an issue here. (The issue might simply be that any effective security measures have occasional unfortunate consequences, but if so, that needs to be acknowledged.) In Scott's terms, understanding is 'not to be admitted in defence', but is still necessary, if for no other reason than to produce an effective counter-terrorism strategy. Moreover, to understand why young men and women might be attracted to a clear apocalyptic vision of the world, to fighting, to the creation of a utopia based on violence is surely not that difficult for anyone who has studied twentieth century history, let alone earlier centuries.

I'm not sure why public discourse has generally become so dumb. Perhaps it's simply that the moronic, through the availability and influence of social media, has simply become more visible. I suspect, however, it's more than that. I'd suggest three things in particular. First, there is the absence of historical understanding. In a world where a scientific paradigm has become increasingly the sole measure of knowledge, the breadth of human sympathy that arises simply from an acquaintance with a range of humanity over different times and different cultures is replaced by a shrill certainty that what passes for truth in twenty-first century Western European elites is blindingly obviously true. Secondly, there is emotivism in morality. If you think that there are no objective standards of right and wrong, then the temptation is to replace calm, patient reflection by agonistic displays of emotion, which work, not just to win the contest, but also to provide a surrogate for personal integrity: the more strongly I feel, the better a person I am. Thirdly, there is the decline in religion. Scott viewed people as souls on a journey towards God, not just lumps of flesh to be steered by whips and carrots onto the right path. That there are times for such physical means, for the hangman and the soldier (or the blackmail to turn an enemy) is a matter of cold realism. But it is also a matter of regret that, instead of always seeing and treating all people as images of God, the needs of public safety and good government do occasionally require force alongside understanding and even sympathy.