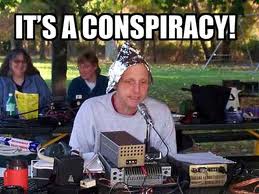 Although I'm not really one for conspiracy theories (I've known far too many decent Freemasons and Giant Alien Lizards in mufti to be easily convinced by such theories) I do have a residual fondness for the 'big business is out to get you' version.

In reality, this is more about a lingering sympathy for Marxism: economic realities tend to drive the cultural superstructure. And thus, with my foil hat firmly in place, I read with interest the article in this week's Economist about declining birth rates in modernised countries:

In east Asian countries such as Japan and South Korea the expectations heaped on wives and mothers are even harder for educated women to bear. Working hours are so long that it is almost impossible to combine work and any active parenting role. Children must also be tutored for make-or-break exams, raising the cost of child-rearing. And, unlike in western Europe or Scandinavia, women must sign up for the whole wife-mother package: births outside marriage are rare.

It ought to be possible to loosen this bind. Governments could make it easier to combine work and parenting; marital expectations could evolve. But for some it will be too late. Countries like Germany seem to have grown accustomed to single living and low birth rates. And in Asia and Europe alike, a new problem has grown: cities have become too nice.

The key sentence here is: It ought to be possible to loosen this bind. Governments could make it easier to combine work and parenting; marital expectations could evolve.

Whilst this certainly is wider than the preceding phrase 'births outside marriage are rare', it is clear that part of what the writer is thinking about here is that loosening of the expectation that birth is conducted within marriage.

When I look at the young today, I do find it incredibly difficult to see how many of them will be able to live their three score years and ten in the sort of lifelong, monogamous bond that we used to call marriage (and now, given its modern remaking as a festive bonk lasting only a little more than Johnny Rotten's two minutes of squelching we will have to find a new name for). Given professional careers don't really leave one free to starting having children until your thirties when female fertility starts nose-diving; given the career long pressures of long hours and expected geographical mobility etc etc, only heroic sacrifice and conscious determination to create the small civilisation of a household will make it all possible. In short, modern business and traditional marriage don't go together at all easily.

Insofar as I'd thought about this before, I'd simply concluded that the rational conclusion to this is childlessness: it's simply too difficult to have children in modernised societies and people will just stop having them, or at least will have too few to meet replacement levels. And that of course means that mass immigration is required to support all us old sterile wrinklies. Whether that's a totally bad thing is another question. But we should at least be honest about where the economics leads:

A country that worries about having too few young people to pay old folks’ pensions might be able to import workers. But that tends to bring the natives onto the streets. And home-grown citizens are handy for conscripting into armies.

But the article hints at another alternative: to encourage having children outside traditional marriage. And with foil hat firmly on, one might become suspicious that the drive to abolish marriage as an institution that stands in the way of a mobile workforce devoted to business is driven by economics rather than the cultural superstructural blether of equal rights and autonomy.

While writing this I came across an Italian article on similar lines.*

...the logic of capitalist profit move[s] directly to the exploitation of the instincts of individuals who are isolated and constantly bombarded by consumer enticements, regardless of any assessment of rational nature, morality or even...pure and simple human ecology.

Ickean nonsense, no doubt. But odd that the house journal of international business seems to be thinking on the same lines...


[*Health warning: my Italian is almost non-existent and it's entirely possible that any article from I quote in this language is in fact a pizza recipe onto which I've projected my own preoccupations.]
Posted by Lazarus at 05:04