Something must be done: Adam Curtis and Bitter Lake 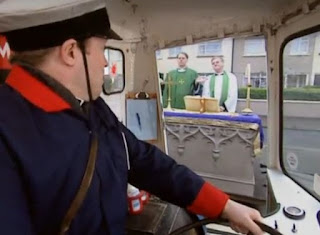 Another Mass? Perhaps not such a bad idea after all...


I finally caught Adam Curtis' 2 hour + long documentary Bitter Lake on the BBC i-player yesterday. (Wikipedia article here. Iplayer here.) It's primarily a reflection on the US and UK involvement particularly in Afghanistan, with the message that Western governments began spinning a simplistic story of good versus evil to support their policies since Reagan, a strategy which has failed and led to foreign policy disasters and a remaining sense of confusion and hopelessness in politics.

It's well worth watching. Death, in particular, can rarely have been made more beautiful. My simple reaction (one that unfortunately others have got to before me: see the Wikepedia article) is that the attack on simplistic narratives is ironically in tension with the simplistic narrative of the film. It also teases. Practising argument by juxtaposition, it suggests that the banking crisis and ISIS are also areas in which this urge for simplistic solutions based on simplistic narratives have failed without doing much to back up these claims, however plausible they may be quite apart from the film.

Whatever else the film is, it is certainly an exercise is the politics of aesthetics. (One of the creepier moments is some well bred art historian lecturing a bunch of Afghans on the importance of conceptual art in nation building.) A well constructed piece can leave you with a sense that 'you've got it': that a convincing vision has been given you which has revealed the truth about a complex situation. Added to this is the vanity of the modern artist contra the bourgeoisie: I have seen through what others have not. Both are abiding sins of popularism and its political child, democracy. In two hours, I have seen what my preceding complete ignorance of Afghanistan might have been expected to be a poor preparation for; in two hours, I have seen through their knavish tricks. To the barricades!

Applying this to current British politics (and particularly 'progressive' Scotland) one might note the attractiveness of (simple) visions: it is like this, and those who disagree are simply fools or giant alien lizards. (That, by the way applies to many in both unionist and nationalist camps in Scotland. For every foam flecked cybernat, I could name a unionist commentator writing off the SNP as a cargo cult.) It also explains, I think, much of the gut reaction to attempts by various people such as Gerry Hassan and the National Collective to insist that creative dance and its ilk should play a key role in our political culture: aesthetics is an unreliable element in politics and perhaps the best thing is for politicans, as in Plato's Republic, to escort the artist to the borders of the State.

But in a wider way, it also a reminder that natural religion is part of rationality. As I've noted before, belief in God is something accessible to reason. To put it more strongly, if you don't believe in God, you're not (fully) rational. Now this is something that is profoundly unfashionable to claim, both within the Church and outwith it. (Note how both sides seem to chummily accept the label of 'faith' for religion.) This, of course, is not something touched on (well, except perhaps unwittingly through Curtis' use of Tarkovsky's Solaris) in Bitter Lake. But rational people in times past squared the circle between something must be done and not actually knowing what to do (or even knowing that there was nothing they could do) by praying. In the absence of a belief in prayer as action, the temptation to rush in and do something is increased. Prayer is however doing something, perhaps the most important something. That secularists are too irrational to see this and have to be left floundering around in a mad frenzy is of course unfortunate but there's little to be done when people close themselves off to a key aspect of reality...
Posted by Lazarus at 02:54