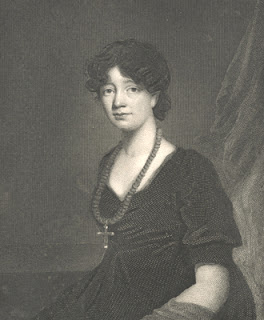 Frankly, I'm unable to judge the poetic merits of the following: too fresh and it hit an emotional chord. ('August' is certainly coming metaphorically for me (and of course literally as well).) Anyway, hadn't seen it before and it's a feature of long enduring marriages that's too little celebrated:

Oh, say not, my love, with that mortified air,
That your spring-time of pleasure is flown,
Nor bid me to maids that are younger repair,
For those raptures that still are thine own.

Though April his temples may wreathe with the vine,
Its tendrils in infancy curl'd,
'Tis the ardor of August matures us the wine,
Whose life-blood enlivens the world.

Though thy form, that was fashioned as light as a fay's,
Has assumed a proportion more round,
And thy glance, that was bright as a falcon's at gaze,
Looks soberly now on the ground,--

Enough, after absence to meet me again,
Thy steps still with ecstasy move;
Enough, that those dear sober glances retain
For me the kind language of love.

Had I seen this poem at the time, it would have served as an excellent response to this typically grubby little Daily Mail piece which stuck in my mind at the time as displaying in its faux sympathetic prurience much of what is wrong with modern understandings of sex and explains why fewer of us seem to reach the sublimity of Scott's attitude. There is in any case a special place in Hell for (mostly) men who dump their wives in favour of younger versions. (Rather too common judging from my circle of acquaintance.)

If there's a general moral to be drawn from all this, it's perhaps that the ability of men and women to construct long term marriages is based on a complex web of attitudes and practices that our modern culture is doing its best to undermine. Instead of sex education, small children should be forced to rote learn the above so that, when August and the need for such an attitude arises, the words are already there.

[As I'm lazy, I googled the poem and cut and pasted it from the website here. It's a nice tribute to Scott and a good site for poetry in general.]