A wafer does turn into flesh and blood: Corpus Christi and Dawkins 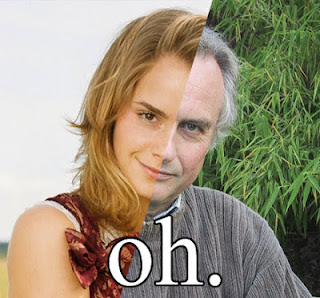 Religion makes specific claims about the universe which need to be substantiated, and need to be challenged – and if necessary, need to be ridiculed with contempt,” he told the cheering crowd on the National Mall.

If the answer is yes, Dawkins suggested atheists should show contempt for believers instead of ignoring the issue or feigning respect.

“Mock them,” he told the crowd. “Ridicule them! In public!” (Report on Reason Rally here.)

Sunday is the Feast of Corpus Christi, the Feast when Catholics celebrate the real presence of Christ in the transubstantiated elements of bread and wine. To put that in Dawkins speak, it's when us sky-fairy loons worship a meat biscuit.

So let's get the preliminaries out of the way. Yes, putting aside some nuances (it's not any old 'blessing' but 'consecration'), I believe that when the priest blesses a wafer and wine, they turn into the body and blood of Christ. Again, still on the preliminaries, the Church does not believe that, if you subject the (consecrated) host to chemical analysis etc, it will appear as flesh and blood: it's precisely to rule out such a view that the doctrine of transubstantiation exists. The accidents of the host are bread/wine; the substance of the host is flesh/blood. (It looks like bread, it smells like bread, but it's really flesh and blood.)

Now, it's one sort of irrationality if sky fairy worshippers went around claiming that (if you analyzed the host) it would turn out to be meat. It's another form of (alleged) irrationality if you claim that, despite all appearances, it really is meat. We hold the latter. We don't hold the former. Please get our irrationality right before mocking.

Given all that, what can I say to defend the rationality of transubstantiation? Firstly, let's get back to general principles. Catholicism contains faith and reason working hand in hand. Each will have a preponderance in different areas. Thus, in ethics, most Catholic doctrines are (I would argue) capable of being defended on the basis of unaided human reason. But every now and then, you will hit a doctrine which depends on faith: the trust that God (as wisdom) can see further and understand more than we can. Once that particular doctrine is accepted, you will find that it aids our understanding of the world. But to get into that position, you have to take it on trust.

Here's an analogy. No child is capable of rationally establishing the basis of arithmetic. But by taking arithmetic on trust, she will find herself introduced into and capable of operating in a more rationally comprehensible world. Similarly, no Catholic is able to prove the truth of transubstantiation beyond pointing to our (reasonable trust) in the specific words of God and in the Church's interpretation of those words. But if the doctrine is accepted, it enriches our understanding of the world.

OK. But how does this enrichment show itself? Here's a few suggestions:

a) It avoids a Christianity which suggests that God came to earth because we needed him to guide us, but then went away again. Christ never went away again: he remains constantly, really present in his Church.

b) Christianity, finally, is not about words or noise. It is about the silent, physical presence of God.

c) It emphasizes the Mass as sacrifice and links us into that Biblical and Classical tradition of sacrifice. Just as in the Jewish Temple, just as on pagan altars, we offer (real) flesh and blood.

e) 'There lives the dearest freshness deep down things' as Hopkins put it. There is a characteristic nightmare of transformation (typical in horror films) that, beneath the mask, lies a terrifying reality. Sartre puts it like this:

“What if something were to happen? What if something suddenly started throbbing? Then they would notice it was there and they'd think their hearts were going to burst. Then what good would their dykes, bulwarks, power houses, furnaces and pile drivers be to them? It can happen any time, perhaps right now: the omens are present. For example, the father of a family might go out for a walk, and, across the street, he'll see something like a red rag, blown towards him by the wind. And when the rag has gotten close to him he'll see that it is a side of rotten meat, grimy with dust, dragging itself along by crawling, skipping, a piece of writhing flesh rolling in the gutter, spasmodically shooting out spurts of blood. Or a mother might look at her child's cheek and ask him: "What's that, a pimple?" and see the flesh puff out a little, split, open, and at the bottom of the split an eye, a laughing eye might appear. Or they might feel things gently brushing against their bodies, like the caresses of reeds to swimmers in a river. And they will realize that their clothing has become living things. And someone else might feel something scratching in his mouth. He goes to the mirror, opens his mouth: and his tongue is an enormous, live centipede, rubbing its legs together and scraping his palate. He'd like to spit it out, but the centipede is a part of him and he will have to tear it out with his own hands. And a crowd of things will appear for which people will have to find new names, stone eye, great three cornered arm, toe crutch, spider jaw. And someone might be sleeping in his comfortable bed, in his quiet, warm room, and wake up naked on a bluish earth, in a forest of rustling birch trees, rising red and white towards the sky like the smokestacks of Jouxtebouville, with big bumps half way out of the ground, hairy and bulbous like onions. And birds will fly around these birch trees and pick at them with their beaks and make them bleed. Sperm will flow slowly, gently, from these wounds, sperm mixed with blood, warm and glassy with little bubbles.”

Transubstantiation resists the modern nightmare with the ancient truth: beneath appearances, there is depth and there is God.

Anyway, enough to give evidence of two points:

a) Catholics believe in transubstantiation not because they reason it is true, but because God (through the Bible and the Church) tell us it is true and we trust them. This is one of those moments when the trust earned on other occasions through rational proof asks us to go beyond -but not in contradiction to- reason. (Bit like with a child or spouse: every so often, you just have to trust them. But that trust has been earned.) But having believed it, it receives rational confirmation through the work it does.

b) Transubstantiation is not an idle doctrine: it does matter whether or not you believe it. I certainly wouldn't say that you can't be a Catholic without believing in transubstantiation: every Catholic is in some way a bad Catholic. But i) it's one thing to have personal problems with this or that doctrine: it's quite another to assert (or even teach) that it is wrong ('I don't understand' does not entail 'It is wrong'); ii) if you don't believe it, you are missing out on a fuller, richer understanding of the world.

And perhaps that's the final message. Catholic teachings fundamentally are not about a test of strength of will:  there's no particular virtue in training yourself to believe 1001 different things before breakfast. They are, on the other hand, meant to be helpful: if you don't believe in them, or even entertain them as a possibility, you are missing out.