Are proponents of euthanasia Nazis? 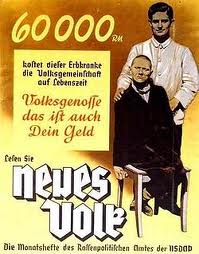 Translation of (Nazi) poster above: This cogenital invalid costs the community 60,000 Reichsmarks in his lifetime. Comrade, that's your money as well!

Paper on medical ethics discussed previously on this blog: While we feel the best interests of the child in question are paramount, the interests of society—including the other children who might have used this valuable resource—cannot be ignored

Official abstract of paper on infanticide published in Journal of Medical Ethics: the authors argue that what we call ‘after-birth abortion’ (killing a newborn) should be permissible in all the cases where abortion is, including cases where the newborn is not disabled.

Mary Warnock:  The veteran Government adviser said pensioners in mental decline are "wasting people's lives" because of the care they require and should be allowed to opt for euthanasia even if they are not in pain. She insisted there was "nothing wrong" with people being helped to die for the sake of their loved ones or society.


The front page of the Sunday Herald on 2 September contained as its single item the bold headline:

(Hard to do the graphic presentation of this justice without an image. It was big. It left you in no doubt this was the main business of the day.)

The reader was referred to an inside 'exclusive report' (online version here) about the Care Not Killing conference in Edinburgh which did indeed discuss 'The lessons from Nazism'.

The article is full of outraged pro-euthanasia supporters:

Jane Nicklinson said of Care Not Killing's agenda: "I think it is totally ridiculous and total nonsense. How you can compare [the right to die campaign] to a Nazi death camp I will never know.

"It is scaremongering, pure and simple – half the things they say are nonsense. They will say something like that and then people who don't know much about it will think, 'We can't have that'. It is irresponsible – they are not giving people the true facts."

Yesterday Independent MSP MacDonald accused Care Not Killing of "cheapening" the issue: "This is improper behaviour on their part," she said. "If they want to have a conference on Nazism and particular aspects of that creed, then I suggest to them that they separate it from a conference about assisted dying, because the two have nothing in common. They have cheapened their campaign."

Raymond Tallis, former professor of geriatric medicine at the University of Manchester and chairman of the group Healthcare Professionals for Assisted Dying, turned angrily on Care Not Killing for making comparisons with Nazism.

"The idea that lining up thousands of people to shoot them is the same thing as acceding to someone's settled wish to die when they are terminally ill and mentally competent indicates how morally blunting it can be when you have religious beliefs."

The Sunday Herald followed up with an editorial which, in the gloriously smug way of such things, said:

...any debate on the question of legislation for assisted deaths needs to be conducted in an enlightened, intelligent and civilised fashion. There is no room for bullhorn rhetoric or arguments based only on sentiment or passion... Another opportunity presents itself this week with a conference in Edinburgh organised by Care Not Killing (CNK), an alliance of healthcare professionals and faith bodies. It is opposed to euthanasia and claims to base its arguments on reason alone, "by avoiding any appeals to extremism". However, it has also claimed that euthanasia can never be acceptable as "we need to learn the lessons from Nazism".

Language of that kind is never helpful and in this case it is inflammatory.

So what to think?

Arguments ad Nazism are pretty common. Sometimes they amount to little more than vulgar abuse; sometimes they make a logical point by taking an extreme case ('If you think moral relativism is correct, does that mean Nazism was morally right?'). In both cases, the reference to Nazism is inessential and often does amount to rhetoric, good or bad.

But sometimes reference to Nazism is simply part of the need to reflect historically on how one of Europe's most civilized and modern countries ended up doing what it did, and how to avoid it happening again. There is absolutely no doubt that Nazism did introduce euthanasia for the disabled and ill: this is separate from the 'Final Solution' that Raymond Tallis seems to be thinking about when he talks of 'lining up thousands of people to shoot them'.

The key historical interest here is how Germany went from a general view that some lives were not worth living to the use of enforced euthanasia. The details of that process are outlined in an excellent article here by Mark Mostert. A particularly interesting aspect is the way that particular, emotionally charged cases were used to effect a change in public opinion:

The Knauer child was a frail child with several severe disabilities. While the case has become quite mythologized, it seems that she was blind, without one leg and part of an arm, severely mentally retarded, and suffered from chronic convulsions (Friedlander, 1995; Lifton, 1986; Proctor, 1988). Her father petitioned the Nazi authorities to grant her a "merciful death" but received no official response. Subsequent to this request, in the winter of 1938-1939, the Knauer child was admitted to the University of Leipzig's pediatric clinic after attending physicians discussed her plight with her persistent father. Aside from the child's obvious physical and intellectual disabilities, the father asserted that the child, by remaining at home, was causing his wife significant psychological and emotional stress. He requested that the physicians proceed by "putting it to sleep." Initially, the doctors refused, reminding the father that such action was against the law. Undaunted, the father, encouraged by the child's grandmother, petitioned Hitler directly to sanction the child's death (Gallagher, 1990). Arguably, the persistence of this one man became the catalyst for official genocide.


The Sunday Herald article is clearly part of a softening up campaign in favour of euthanasia that is the precursor to Margo MacDonald's attempt to reintroduce a bill into the Scottish Parliament in this area. Putting aside whether it's right to keep banging away at legislation in this area when it was only recently overwhelmingly rejected by the Parliament, all of us, on whatever side of the argument, need to be familiar with the history of euthanasia, particularly in Europe. A key aspect (but not the only aspect) of the pro-life case is the claim that there is a slippery slope between assisted suicide, voluntary euthanasia and involuntary or non-voluntary euthanasia. Examining the history of how such slippery slopes actually occurred in the past is an important part of the debate. To dismiss such historical studies out of hand is itself a sign of irrationality.