Outrage as Sunday Herald linked to Der Stürmer by blogger 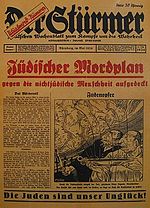 See? I can make sensationalist headlines as well...

Times must be tough down at the Sunday Herald. We've had two front pages recently where the main story (indeed the only story) was that some pro-life cause has mentioned Nazism in passing and their opponents have taken staged hissy fits as a result. As well as the shock and upset caused to fine upstanding characters such as British Pregnancy Advisory Service spokespeople, the Sunday Herald has also added editorials condemning 'inflammatory comparisons'.

I blogged about the first occasion where the headline was Outrage as lobby group links right-to-die campaigners with Nazis. This time we had Pro-choice activists outraged as bishop compares abortion clinics to Auschwitz. The previous headline resulted from the inclusion of a session about the historical lessons from the Nazi euthanasia programme for the UK; this current 'outrage' is because the Bishop of Motherwell said that, just as photographs of Auschwitz brought home that horror, so photographs of abortions brought home this horror of abortion. Note that he did not say abortion was like the Holocaust. Note that he used the comparison of the Burma Railway as well as Auschwitz (but of course that didn't figure in the Sunday Herald headline: less catchy of course).

"I have no doubt that the publication of the photographs of the victims of Auschwitz and the Burma Railway brought home the horrors of such evil catastrophes far more effectively than a million pleading words. Two hundred thousand abortions take place in Britain each year. Why is the pro-choice lobby so desperate to hide the truth about abortion from the public?"

His point was the simple one: display of images of immoral consequences are part of revealing the truth about those consequences. Both the treatment of British prisoners by the Japanese and the treatment of Jews by the Germans are iconic: unlike many other human tragedies, mention these and we immediately can tap into a range of familiar photographic and cinematic images revealing their nature. Now, I've blogged about the use of pictures of the unborn before in connection with using pictures of the healthy unborn as evidence of their status as human beings. The use of pictures showing the results of abortion does raise slightly different moral issues, but, in principle, the same point is at the heart of each: the feelings which result from such images are evidence of what is sometimes questioned -that the unborn are human beings with the moral status of human beings. If opponents of abortion don't like the fact that human beings are hard wired to care for babies, then they need to argue their case further, not pretend that such care doesn't exist.

The Sunday Herald, as ever overloading on smug, says in its editorial:

If the church wants to try to persuade others that their view on abortion is the correct one, then it should try explaining its views in a reasoned manner as part of a civilized debate. Abortion is a complex, emotive and -at the end of the day- moral debate. Those who hold positions of power should behave morally when attempting to influence the opinions of others.

[The Catholic Church] ...is not entitled to brand those who disagree as murderers and link it -however obliquely- to the killing of thousands in Nazi death camps.

Images are an important part of information on the nature of abortion. They show the fact of human solidarity between the dead and us as spectators and even agents of their death. For Catholics, killing lots of babies is ceteris paribus morally identical to killing lots of adults because in both cases we're killing lots of human beings. That's not the point the Bishop was making, but he could have.

In any case, this constant association of Nazism and pro-life causes by the Sunday Herald is getting slightly bizarre. On a day when there was a major march for Independence in Edinburgh, and when we might have been invaded by aliens, was the major, front page story really that some pro-abortionists got their noses out of joint because they realized the Catholic Church regards them as mass murderers? Even though, as I've said, this wasn't the Bishop's point, they should be used to this by now. As the Catechism (2273) says:


"The moment a positive law deprives a category of human beings of the protection which civil legislation ought to accord them, the state is denying the equality of all before the law. When the state does not place its power at the service of the rights of each citizen, and in particular of the more vulnerable, the very foundations of a state based on law are undermined. . . . As a consequence of the respect and protection which must be ensured for the unborn child from the moment of conception, the law must provide appropriate penal sanctions for every deliberate violation of the child's rights."81

2274 Since it must be treated from conception as a person, the embryo must be defended in its integrity, cared for, and healed, as far as possible, like any other human being.

It would be entirely unworthy, of course, to suggest that the Sunday Herald was indulging in sensationalist headlines about Nazism whilst posturing as civilized referee. But I suggest that they should move on to new ways of boosting circulation. Surely there must be some way of slagging off pro-lifers by using topless photos of the Duchess of Cambridge? 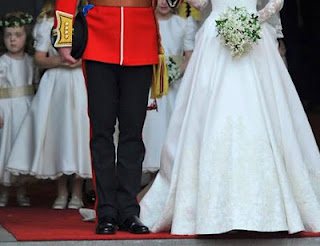