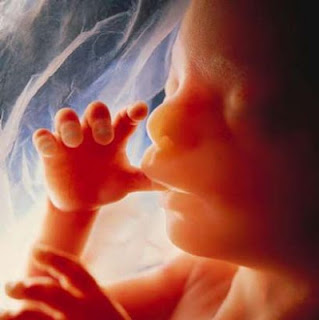 With the introduction in some US states of laws obliging women to see ultrasound pictures of their unborn child before an abortion as well as the normal, rumbling discussion about the use of images of babies in anti-abortion campaigns, what in general is the role of pictures in coming to a moral decision on abortion?

Putting aside questions about the rights and wrongs of forcing women to see pictures, or about the use of misleading pictures, the general argument against using pictures is simply that they engage the emotions in what is essentially a rational decision: by appealing to a 'coo' factor or a 'yuk' factor, such images undermine the process of rational reflection.

Of course, for those theories of moral judgment which reduce them to a mere expression of emotion, there is a general difficulty about explaining why some emotional reactions are more important than others. But for Catholics, there is an apparent difficulty in explaining why what is essentially a decision based on cognition -of the nature of the action and of the relevant portion of the natural law- should be influenced by the deliberate seeking of an emotional reaction. I'll say something more about the specifically Catholic position at the end, but for the moment, let's approach the question through the prism of one of the big three ethical approaches that you'll find in modern, academic, non religious philosophy: virtue ethics.

In virtue ethics, the secular philosophical approach developed from Aristotelian ethics, emotions are a key element of moral decision making. However, it is also possible that we, as less than perfect moral agents, have our emotional reactions wrong: the less than virtuous will tend to feel wrongly, and the correction of such wrong emotions is part of the movement towards virtue. But it's rather implausible to claim that the (general) reaction on seeing the obviously human shape of a unborn child is in some way distorted: if this was 'corrected' the (virtuous) reaction which we depend on for a flourishing life of respect for other human (shaped) beings would also be removed. And this is why the showing of images such as the above is one of the strongest anti-abortion tactics: it taps into the essential care for the human form, and more particularly the young, helpless human form, on which human care for the next generation depends.

The main pro-abortion objections here would seem to be:

a) We can be misled by such images
b) Such images get in the way of a rational decision
c) We do not in fact have a strong emotional reaction to the unborn at an early stage of development.

On a), I've already noted that the imperfectly virtuous will get their emotional reactions wrong, but that isn't the case here: we would expect the virtuous to feel care in the face of a human baby appearance. So the objection here must be rather along the lines of the 'cute bear' syndrome: human beings find bears cute, even when they represent a serious danger to them. (We 'misread' bears because they look cuddly and friendly when they're not.) But again, that can't be the objection here: unborn babies don't look like human beings (but aren't). They actually are human beings. (And note that this point is separate from the claim that they look like human persons but aren't: on the assumption that 'person' here means someone who is capable of autonomy and rational decision making, unborn babies don't look like persons. (I wouldn't entrust my business affairs to one.) They look like helpless human beings because that's what they are.) In sum, the charge of being misled is wrong because the images are appealing to a virtuous emotional response rather than a flawed emotional response; and because they elicit the emotion of care for what they really are rather than what they appear (misleadingly) to be.

On b), within the context of virtue ethics, emotions are an essential rather than a regrettable feature of decision making. So this objection has to be interpreted as one about a specific difficulty in the role of emotions here, rather than a general inappropriateness in referring to them. Perhaps the most obvious way of doing this is by thinking of cases in which the 'yuk' factor can get in the way. One example would be the dentist: we might have a strong emotional reaction to going to the dentist but realize that we need to get over it in order to have the necessary dental work done. Analogously, it might be claimed, we realize that we need an abortion but have a 'yuk' reaction to the process of getting it done. And, as in the case of the dentist, it would be irrational to dwell on the occasions of those 'yuk' reactions: much better to close your eyes, screw your courage to the sticking place, and try not to think about the process of dentistry (or abortion).

So this suggests that, in some circumstances, if you are convinced of the morality of a particular abortion, it may be rational to avoid occasions of emotional reactions such as photos. But there is a distinction to be drawn here between the case of dentistry and the case of abortion. The point of the photos is that they reveal something that may otherwise be overlooked: that we have strong emotional attachments to the sort of being that we are trying to get rid of. The worry on the anti-abortion side is that this important and morally relevant fact is too easily lost sight of and that is why it needs to be re-introduced into the decision making process in order for that decision making process to be complete. In the case of dentistry, either the emotional reaction is disproportionate to the actual events (in which case, familiarization through (eg) pictures might indeed help) or the emotional reaction is correct but outweighed by the dangers of not going through with the procedure.

Finally, I turn to c). Now if it is true that, as I have argued, familiarity with pictures of a developing baby is part of the reflection which is required in thinking about abortion, a consequence of that is, in all probability, that showing pictures of early stages of foetal development isn't going to provoke an emotional reaction.

Doesn't this show, it might be argued, that early stage abortion is morally unproblematic? Well, all I have argued here is that familiarity with pictures of the development of a baby is a necessary condition of rational reflection on abortion. But this does not amount to a claim that it is a sufficient condition: just looking at pictures isn't enough. A claim you'll often here about Catholic views on abortion is that they've changed over time: Aquinas, it is (falsely) claimed, had no problems with abortion up to the point of ensoulment which he placed following Aristotle at either 40 or 80 days after conception. This reasoning was, roughly, based on the appearance or, more exactly, the movement of the child: the sort of thing that is indeed captured by photos and scans. So based just on this evidence, there would be a good case for distinguishing between the 'quickened' and the unquickened child. But now we have more evidence; that the process of growth from conception to birth is more of a continuous process than earlier times thought. Now, whatever finally we are to make of such evidence, it is clearly relevant to rational reflection: again, pictures just aren't enough. But that doesn't make them unnecessary.

To sum up, within the virtue ethics approach, familiarity with the appearance of the growing baby and our emotional reaction to that is an essential part of rational deliberation.

What then of a specifically Catholic approach here? As Catholics, we are bound by the Magisterial teaching expressed in the Catechism (para 2271):

Direct abortion, that is to say, abortion willed either as an end or a means, is gravely contrary to the moral law.

That authoritative teaching does not contradict the sort of philosophical considerations adduced above, but builds on them. The virtue ethics approach sketched above focusing on the appearance of the unborn baby, at the least, shows that abortion after a certain stage of development should be morally troubling: to acknowledge that much is moral progress. That further argument may be required to demonstrate the complete immorality of all direct abortion shows only the incompleteness of the above considerations, not their irrelevance.
Posted by Lazarus at 01:45