St Andrew's Day, death and back to Dunbar 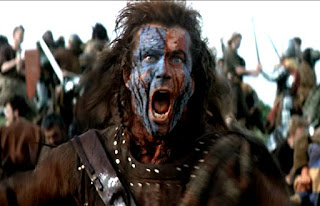 Mel Gibson expounding the glories of Scotland's mediaeval past

I suppose I'm pretty much a dyed in the wool cultural nationalist. Not that I feel bound to find, say, the Krankies funnier than Mike and Bernie Winters, or Irn Bru preferable to Tizer, but simply that it's both a natural human response to feel at home in a particular culture, and also that there's enough of Scottish culture that's objectively worthwhile for it to be preserved and celebrated -and if Scots don't do it, no one else will. I'd expect and hope that my non-Scottish friends would say similar things about their own local cultures.

Cultural nationalism is perhaps a little on the backburner up here at the moment. In an understandable effort to avoid any sort of 'blood and soil' racism, political nationalists tend to emphasize cultural Jetsonism: Scotland should go it alone not so much because of our Scottish cultural identity but because by breaking away from the UK and its archaic governmental structures, Scotland would be able to transform itself into a modern progressive, tolerant society where every citizen, of every race, gender or sexuality will be fully equipped with rocket boots and food replicators. To the extent that the past figures at all in modern political nationalism, it is perhaps the lingering rumour of Braveheart Nationalism: the sense that we should once again get the woad out and start shouting freedom a lot.

Between the twin idiocies of Braveheart Nationalism and Jetsonism, there of course lie various other possible engagements with Scotland's past. A relatively common one is to wax lyrical about the Scottish Enlightenment, particularly an Enlightenment stripped of any mention of the influence of Christianity. Moreover, even if the influence of the Church of Scotland is acknowledged, it is often in opposition to preceding mediaeval Catholicism, a narrative which goes something like: 'with the Reformation came universal education and the critical assessment of religion which led to...'

We don't hear much these days of Hugh MacDiarmid's cry of 'Back to Dunbar', and still less of the need to re-engage with all the cultural glories of mediaeval Catholic Scotland: Dunbar, John Mair, Robert Carver etc. Coupled with a lingering thuggish sectarianism and the Jetsonist tendency to dismiss any articulation of Catholic teaching as bigotry, we have a perfect storm where a variety of popular and elite narratives combine to prevent a serious engagement with Catholicism and thus with arguably the Golden Age of Scottish culture: an appreciation of mediaeval Scotland is impossible without an appreciation of Catholicism.

Anyway, it's November, and we sky fairy worshipping Catholics have been praying for the dead. Let's end with a reminder of why MacDiarmid was right to summon us back to Dunbar:

(For a version with notes and glossary see here.)

Our plesance heir is all vane glory,
This fals warld is bot transitory,
The flesche is brukle, the Fend is sle;
Timor mortis conturbat me.

On to the ded gois all estatis,
Princis, prelotis, and potestatis,
Baith riche and pur of al degre;
Timor mortis conturbat me.

He takis the campion in the stour,
The capitane closit in the tour,
The lady in bour full of bewte;
Timor mortis conturbat me.

He sparis no lord for his piscence,
Na clerk for his intelligence;
His awfull strak may no man fle;
Timor mortis conturbat me.

He hes done petuously devour,
The noble Chaucer, of makaris flour,
The Monk of Bery, and Gower, all thre;
Timor mortis conturbat me.

Gud Maister Walter Kennedy
In poynt of dede lyis veraly,
Gret reuth it wer that so suld be;
Timor mortis conturbat me.

Sen he hes all my brether tane,
He will nocht lat me lif alane,
On forse I man his nyxt pray be;
Timor mortis conturbat me.

Sen for the deid remeid is none,
Best is that we for dede dispone,
Eftir our deid that lif may we;
Timor mortis conturbat me.
Posted by Lazarus at 00:00