Gerry Hassan, Alasdair MacIntyre and the future of Scottish politics 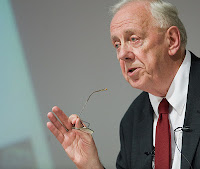 Mirror, mirror, on the wall, who is the main Scottish public intellectual of them all...?


I confess to being a bit fascinated by Gerry Hassan. For non-Scottish readers, he's a sort of omnipresent talking head here whose shtick is going on about the need for a more intelligent engagement between progressive politics and nationalism. Or, in his own words:

Hailed by the Sunday Herald as ‘Scotland’s main public intellectual’ Gerry has written and edited a dozen books in the last decade on Scotland and the wider world: from the setting up of the Parliament, to its record, policy, in depth studies of the Labour Party and SNP, and looking at how we imagine the future. Gerry’s activities include facilitating events, discussions and conversations which bring people together in Scotland and across the world.

So why my fascination? Well, partly, it's because I think he does make the right noises: independence or no, Scottish politics has got to develop some more depth. That's partly about the SNP and the Labour Party no longer regarding each other as akin to something you've inadvertently brought into your house on your shoe, but it's also partly about widening and deepening the issues in the political debate away from short term party political tactics. (I don't agree with Lalland Peat Worrier's (surely mischievous) suggestion that the Unionist parties in Scotland are deliberately being rubbish as part of a strategy to undermine Scottish Independence, but it's certainly true that one of the strongest arguments against independence to me at least is the thought that a newly independent Scotland would have only one properly functioning political party, the SNP. It's ironic that the political competence of the SNP contrasted with the other Scottish parties becomes an argument against independence, but nonetheless, 'tis so.)

The deepest public political debate in Scotland seems usually to consist of two or more people arguing about how we can become more progressive than before. Even the Scottish Tory leader, Ruth Davidson tends to say stuff like:

I have said Conservatives never get enough credit for how progressive they can be and how anti-establishment in terms of picking candidates they can be (Guardian).

Amongst some good sense in a recent article, Gerry Hassan comes out with the following:

The myths of modern Scotland, what we could essentially call our foundation stories, are the democratic intellect, egalitarian impulse and popular sovereignty. As I argue in the introduction to the newly published book, ‘The Seven Wonders of Scotland’, an account of seven imagined futures of Scotland, we do not often act on these.

It is as simple and fundamental as this. Let us decide if the above myths are what we want to be defined by, and if they are then genuinely act upon them in a way we do not at the moment, in education, social justice and democracy. And we should then live by them as a set of ethics for a modern, progressive, democratic Scotland. A place that realises that its past, present and future are all interwoven and interconnected. That knows that the first step in creating a different future is imagining it. That’s what being a culture of self-determination entails.

Why should Scottish politics be founded on myths? (It's one thing to talk about the importance of narratives, quite another to think that those narrations are located in the neatness of myths, particularly when these myths are little more than slogans.) Who is going to decide on those myths? By what structure of power? (Should we have a sort of constitutional conference where our national myths are decided by the majority?) What about dissenting narratives? (My myth of a modern Scotland is that everything's gone wrong since the introduction on nominalism in the late mediaeval period, and that we all need to get back to Aquinas and spiritual disciplines such as wearing hair shirts. Am I going to be allowed that narrative?)

So my problem with Hassan is that he promises so much and delivers so little: his nostrums of progressive politics  ('learn how to use humour, play and irreverence, and encourage spaces and resources which sit outside the system' (here)) are really part of the same old, same old: an Enlightenment dream of a transparent rationality coming up with simple, explicit principles which can be imposed on the structures of civil society and the family by (party) politics.

Contrast this with someone who (in terms of eminence at least) might be thought to have rather more claim to be Scotland's leading public intellectual: Alasdair MacIntyre. In a recent lecture, (video here; review here (for non-Catholics, if you want the essence of his analysis, try starting about 23 minutes in)) he reflects on how American Catholics should react in a political landscape dominated by a 'vulgarized liberalism' and a 'vulgarized conservatism'. (Scots might suggest the introduction of even a vulgarized conservatism into public life here would be an advance.) His answer, in principle, is that we should focus on the deeper resources of metaphysics, poetry and narrative and not get entirely swept up into a debate structured by those twin vulgarizations. But behind it all, there are two principles. First, there is MacIntyre's strong sense (argued consistently from After Virtue) that thinking takes place within a tradition, and that there are competing traditions in the modern world. Second, there is, within the Catholic tradition, an emphasis on 'the mystery of things' and a consequent need to trouble and be troubled by those who are 'too much in love with their own beliefs'.

Not only are these two elements of conflict between traditions and the inability of discourse ever quite to capture the ultimate nature of the world downplayed by Hassan, but he also ignores specifics which follow from this. In particular, there is the central importance of the family as a space where narratives are formed and children are inducted into that form of life that is Catholicism (or any other well formed tradition). Moreover, the absence of specific practices from Hassan's analysis (and contrast for how long at the beginning of the video MacIntyre spends talking about prayer and scripture) indicates just how far his own analysis falls into the same trap 'of talking a language of abstracts' rather than trying 'to link up individual stories and collective stories'. For a Catholic (and analogous things could be said about other religions and even the deeper sort of atheist), politics -the life of the city- emerges from and is secondary to specific practices such as prayer, and specific narratives such as scripture. But 'progressive politics', at least in Hassan's version, is absolutely blind to such specificities, preferring to focus on the sort of slogans and power structures that are visible to the secularized, party political mind.
Posted by Lazarus at 05:02