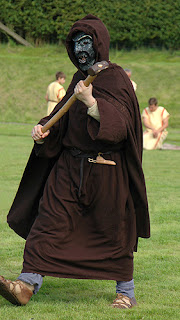 Though with the death of a gladiator the bizarre and exotic show was not yet over.
Two strange characters would enter the arena in one of the intervals, by which time several corpses might litter the floor. One was dressed as Hermes and carried a red-hot wand with which he would prod the corpses on the ground. The second man was dressed as Charon, the ferryman of the dead. He bore with him a large mallet, which he would smash onto the skulls of the dead. Once again these actions were symbolical. [Here]


I had been settling down to read the Scottish Government's White Paper on Independence (600+ pages) , as well as the Pope's Evangelii Gaudium (200+ pages). But Lallands Peat Worrier's post on Margo MacDonald's new euthanasia bill (PDF) dragged me away from this inviting Yuletide prospect...

MacDonald has returned to her attempt to introduce euthanasia into Scotland. Although it certainly isn't the same Bill as the one that was overwhelmingly defeated before, the issues are substantially the same: sicut canis qui revertitur ad vomitum suum sic inprudens qui iterat stultitiam suam.

Doubtless we'll be returning to this over and over again from different angles, but it's important to get at least some of the opening shots out of the way before sheer weariness at MacDonald's persistence sets in and MSPs are tempted to convince themselves that something very different is on offer here from the previous Bill. The Policy Memorandum (PDF) suggests that there are three main differences from the previous Bill:


12. While the current Bill builds on the work done in relation to the previous one, the policy
has also been substantially developed.
13. In particular, the current Bill limits eligibility to those with an illness that is, for them,
terminal or life-shortening or a condition that is, for them, progressive and either terminal or lifeshortening – but does not also include those who are permanently physically incapacitated, thus addressing concerns (disputed at the time by the member) that the previous Bill inappropriately targeted disabled people.
14. In addition, the current Bill is clear that the assistance it authorises does not include any
form of euthanasia  – thus addressing a specific concern that the previous Bill would have
authorised some forms of voluntary euthanasia in addition to assisted suicide.
15. The process that a person must go through has also been amended, removing some
overly-complex aspects, while at the same time enhancing overall the set of safeguards it
provides.  The main changes are the requirement for a preliminary declaration to be made before a first request, and provision for the training and licensing of facilitators, able to provide some of the practical assistance likely to be required.

To summarize the claimed changes:

1) Only those with life shortening conditions are included. (So not the disabled without shortening of life.)
2) No euthanasia.
3) Simplifying and enhancing process.

1) Many disabilities also shorten life. That some disabled people will be excluded from the new Bill who would have been included in the previous one does not remove the problem that disabled groups objected to: 'that certain people with disabilities would have been eligible for end-of-life assistance simply by virtue of being disabled, and that this stigmatised such people as having lives not worth living' (para 29, Policy Memorandum). Have a condition that shortens your life by a day (ibid, para 30), and you'll be eligible. (Watch out HIV sufferers and paraplegics.)

Nature of assistance: no euthanasia etc.

(1) Nothing in this Act authorises anyone to do anything that itself causes another person’s death.

This section seems to be referred to in the Policy Memorandum:


14. In addition, the current Bill is clear that the assistance it authorises does not include any
form of euthanasia  – thus addressing a specific concern that the previous Bill would have
authorised some forms of voluntary euthanasia in addition to assisted suicide.

This seems to be mere puff without substance. Firstly, the concept of  'euthanasia' is not always distinguished from assisted suicide as noted by MacDonald herself in her evidence to the Parliamentary Committee respecting her previous attempt:

That is why, when we were drawing up the bill, it was difficult to decide whether to use the word "euthanasia". This might be entirely personal, but I maintain that euthanasia is associated with someone else taking the decision, rather than the requesting patient. I accept that some people think that, in the final analysis, it is euthanasia if the requesting patient cannot self-administer the drug and a clinician gives assistance at the very end.

Professor Laurie (Medical Jurisprudence, University of Edinburgh) in his evidence  (col 88) to that committee noted, concerning the difference between assisted suicide and euthanasia, that, 'From a principle point of view, it is difficult to draw the distinction.'

Laurence Hinman (a Professor of Philosophy at San Diego University) in his presentation on euthanasia (here, slide 18) includes assisted suicide in the category of 'active, assisted euthanasia'.

Now, my point here isn't that some rough distinction can't and hasn't been drawn between euthanasia and assisted suicide, but that, as a matter of principle, the distinction is quite hard to draw and even harder to draw in terms of a moral difference: simply announcing that the Bill doesn't cover euthanasia means nothing except as a branding exercise to make it sound nicer. The substance of the claim must rest on the gloss 'Nothing in this Act authorises anyone to do anything that itself causes another person’s death'. But here, we are simply faced with more philosophical fog. The precise role of the 'licensed facilitator' is

to provide, before, during and after the act of suicide (or attempted suicide) by the
person for whom the facilitator is acting, such practical assistance as the person
reasonably requests (section 19).

At one extreme -the paradigm of assisted suicide I suppose- we can imagine the licensed facilitator getting on with her knitting while 'the person' takes the pills. At the other extreme -the euthanasia end- we can imagine a Kervorkian machine. As it stands, the Bill is not clear that such a paradigm case of euthanasia is in fact ruled out. (It certainly doesn't seem to be by section 18 (3):That requirement is that the cause of the other person’s death must be (or, in the case of an attempt, would have been) that person’s own deliberate act.) Any assistance is part of the causal chain of another person's death: the question is what sort of causal intervention is acceptable, first, in terms of the Bill and, perhaps more importantly, morally. Despite all the sweet words, this is still a Bill about helping people to die.

3) MacDonald claims the Bill simplifies and enhances the process of (what I shall persist in calling) euthanasia. Her own description of these changes (in the Policy Memorandum, section 15) is:


The main changes are the requirement for a preliminary declaration to be made before
a first request, and provision for the training and licensing of facilitators, able to provide some of the practical assistance likely to be required.


Frankly, the preliminary declaration isn't worth the paper it'll be written on. Its claimed value is that


anyone who is opposed in principle to the idea of assisted suicide can take reassurance from the fact that simply by never making a preliminary declaration they can disqualify themselves
entirely from the process. (PM, section 23.)

Well, no one ever thought that you'd be bumped off without having signed some bit of paper first: the worry was that, in the process leading up to that signing, pressure (eg from a cash strapped NHS and a medical profession increasingly trained to regard killing as a suitable treatment) would lead to that signature being made. Nothing in the Bill changes these worries. At most, it delays death by a seven day cooling off period  (section 8 (3) (c)).

And as far as the 'licensed facilitators' are concerned, other than providing for some sort of Chartered Institute of Death (section 22), we don't learn much of any substance other than we seem to be creating a new sort of job opportunity for 16 years olds (section 21 (2)) who don't fancy supermarket checkouts.

Nothing of substance has changed in MacDonald's new Bill. Whatever the theatrical setting, this is still the moral equivalent of bumping off the sick with Charon's mallet. I've gone on about this before and doubtless I'll go on about it again, but it never ceases to amaze me that a campaign which so much emphasizes 'dignity' and 'autonomy' seems blithely unconcerned about setting up a bureaucratic monstrosity which allows people to be put down. That's symbolic of much that is rotten in the modern world.