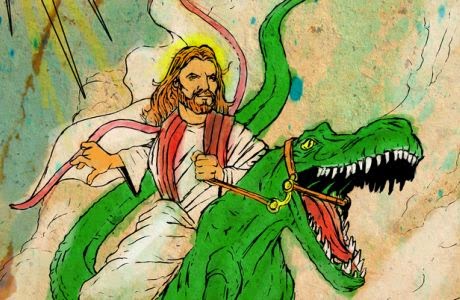 I had been trying to keep out of the latest Creationism spat in Scotland. If by 'Creationist' you mean, 'God created everything in 4004 BC in six days', then it's not really a Catholic thing, mainly because reason plays too important a part in Catholic understandings of salvation for such a version of Creationism to sit easily within the Church. Of course, Catholics are creationist if you mean, 'Did God create the Universe?'. But between those two poles there are a variety of positions, and unpicking them is a tricky matter. Moreover, there's a sort of tribal loyalty: I like David Robertson and John Mason MSP who have been prominent on the 'pro-Creationist' side and I've been called a homophobic bigot enough times by supporters of the Scottish Secular Society (SSS) to feel a little out of sorts with that side. So, to be honest, I've rather felt that it's too much work to think about, not really my fight, and I'm happy to leave it to others to deal with. At the weekend, however, I got (by accident more than anything else) into a Twitter exchange with the SSS twitter account which forced me to think about the issue a bit more than I had. It was, I confess, an extremely civilized exchange, even friendly, so thank you to whoever was on the other side of the SSS account!

Anyway, the situation (as I understand it) stands something like this. John Mason MSP has introduced a motion into the Scottish Parliament:

This is in direct response to South Lanarkshire's guidance (David Robertson's comment here) and a previous attempt by the SSS to introduce a ban on creationism in Scottish school via a petition (which was rejected by Parliament). The petition wording was:

Calling on the Scottish Parliament to urge the Scottish Government to issue official guidance to bar the presentation in Scottish publicly funded schools of separate creation and of Young Earth doctrines as viable alternatives to the established science of evolution, common descent, and deep time. [Details here.]

The definition of  'creationism' used in the petition is glossed by the background information given to the petition as:

‘Creationism’ here means any doctrine or theory which holds that natural biological processes cannot account for the history, diversity, and complexity of life on earth and therefore rejects the scientific theory of evolution. Pupils should also be taught about the age of the Earth on the basis of established science, and not presented with Young Earth scenarios as credible alternatives.

This guidance is not intended to inhibit discussion of beliefs about the origins of the Earth and living things, such as creationism, in Religious Education and other cultural studies, as long as they are not presented as valid alternatives to established science.

Creationism here means the separate creation of different living kinds. No objection is being raised to discussion of the overall belief in God as the ultimate creator. Similarly, by Intelligent Design we mean the oft-refuted claim that natural processes cannot generate the kind of new information required for evolution. This claim should be distinguished from the respectable philosophical position that sees the operation of the Universe as a whole as the working of Providence.

Pupils must be taught about evolution as firmly based science, and not presented with ‘creationism’ as scientific fact or as a valid alternative to evolution.


OK. Ducks laid out in a line. Where to start?

I think it's perfectly reasonable that science lessons deal with 'established science'. That's a slightly slippery phrase, but I'm perfectly happy to think of it as being roughly equivalent to Kuhn's 'normal science' -ie (roughly) the sort of intellectual framework professional scientists work within at the current time. That means that children should be taught in lessons that assume the earth is a lot older than 6000 years and that the prime driver of the 'history, diversity and complexity of life' is evolution through natural selection. School science should reflect (roughly) university science: it should be part of a process of apprenticeship that allows children to enter into the adult professional world of scientists.

A few things follow from this. Curricula should be set (in substance) by relevant experts and not by politicians. (This applies to history as much as biology.) There might be a limited role for government, but it is essentially subsidiary to that of professional academics. (So although I wouldn't rule out some sort of legal ban on this-or-that position in a science lesson, I'd want to be a) absolutely convinced that there was a real problem to be addressed rather than just a potential problem; and b) I'd want to make sure that the inevitable clumsiness of law and bureaucracy didn't get in the way of the educational prudentia -ie letting teachers exercise their judgment.)

I don't see anything in John Mason's motion that contradicts my view on this: he is not (in any clear way at least) demanding creationism in science lessons. (David Robertson commented on the SSS petition: 'No MSP has been defending creationism within science classes in any Scottish school.' That was written before John Mason's intervention, but I'd be amazed if that motion intended a change to that position.)

So I'd broadly agree with the SSS that 'creationism' shouldn't be taught within science lessons, but disagree that this needs specific legal action: as the Scottish Government argued, "The evidence available suggests that guidance on these matters is unnecessary."

But what about outwith science lessons? The problem here is that teaching about creationism is not just something that might be discussed outside science lessons, but is something that probably must be discussed. Imagine a situation where 'God created everything in six days in 4004BC' were assumed to be false in science lessons, but nothing was said about the wider implications of this. If you have pupils entering the schools from a background that does accept such a creationist view, you'd almost certainly end up with a modern version of the 'two truths' approach: 'This is what you need to say in Higher exams; this is what we believe to be true.' (There appears to be anecdotal evidence of this already happening.) Unless, somewhere in education, the place of science in truth gathering is addressed, then the paradoxical result is that science is undermined: it becomes a dead letter, followed to pass exams, but of no interest in a fuller understanding of the universe.

Now, I suppose there's an argument that this issue -one of the philosophy of science rather than normal science- should be addressed in science classes. Frankly, I think this is nuts. Philosophy of science is difficult enough without cramming it into (say) a Higher class in biology: at best, it would be simplistic; at worse, it might actually be counterproductive by making the position stated clearly ridiculous. (One imagines something at worst like Dawkins on one of his twitter rants.) On the other hand, I suspect it is equally nuts to expect something like a separate undergraduate class in the philosophy of science to take place in a school environment (the nature of science is highly contested and difficult; most secondary school teachers simply don't have the ability to teach it; there isn't enough time in the curriculum). It certainly won't do to impose a highly simplistic scientistic framework on this complex area such as that envisaged by the SSS. For example, would discussions such as Nagel's be banned from reflection? (The prospect of that intellectual powerhouse that is Holyrood pronouncing on some of the most difficult areas of philosophy is, shall we say, troubling...)

So what's left? I suspect the answer to this is that what's left is unsatisfactory: it's inevitable that secondary schools students leave school with a pretty inadequate grasp of epistemology and the philosophy of science. (They will also lack a sure grounding in Akkadian.) What they should be left with is a sense of unease and possibility: that if they come from a fideist, young earth background, they should be aware that the preponderance of educated thought is against them; that if they come from a New Atheist background, they should be aware how difficult these issues actually are.

I pretty much agree with John Mason's motion. I don't agree with: '...none of these positions can be proved or disproved by science and all are valid beliefs for people to hold.' I think that (eg) young earth creationism is disproved by science and is only 'valid' to the extent that people should be free to believe nonsense. But actually to show that is far trickier than the SSS seem to think and isn't something that I'd expect secondary schools to be able to do. The problem here is that schools can only reflect wider society. If wider society (or a minority group) believes nonsense, there is only a limited amount that can be done to remove that nonsense with the schools system, and the imposition of views by authority is actually counterproductive if the aim is to produce children who think critically.