Breaking Bad and the culture of family 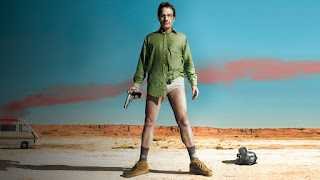 I suppose I ought to be talking about Laudato Si', but I've still only dipped into it. On the other hand, I have recently emerged from my first boxed set immersive experience (with Breaking Bad). So let's talk about that...

I should probably say something about the effects of watching approximately 50 hours of television in a fairly solid block (plus, to be exact, the 8 hours or so of Better Call Saul, the successor series in a rather more gentle schedule). It's a bit odd, perhaps rather like being trapped in one of the Crystal Meth houses that keep popping up in the series. Reality and Fernsehenswelt blend at least a little. I found a 'spirited exchange' with a family member taking on some of the emotional colouring of Walt and Skyler's interactions ('Who the hell does she think she is treating me like this just because I cook meth?') and slight worries about unanswered emails segueing into rather more profound worries about whether the Feds would get me.

There's also the issue of cultural memory. Now that the previously ephemeral art of TV has been preserved (and putting aside connected changes in scheduling and instant availability), how will this affect our relationship to the medium?

Well, for another time. I'm just going to stick to the content rather than the form in which I viewed it. I don't think I've mentioned this before, but one of the inspirations of this blog was the film criticism of Joe Bob Briggs, both in the creation of a 'distinct' voice, and in the use of that voice to articulate truth. Frankly, vague inspiration rather than reality it stayed: my online personality hasn't turned out that different from my real one, and I've never had enough courage to engage philosophy or theology in the echt Joe Bob Briggs manner:

That said, there's a lot to be said for the school of Joe Bob criticism of popular culture: it's very easy to faff around with semiotic this or that, when the real business and attraction of a cultural artefact is the quantity of breasts and 'aardvarking' (guess).

So with that in mind, I confess to being rather impatient with the sort of Catholic critique of Breaking Bad which focuses on the moral complexity blah-blah. It's really just an extremely well made thriller. 90% of the time, you're hooked in not by anything more than how Walt or another character is going to get away alive from some thug (or Fed). If I were going to be crude, putting aside the first and the last series (the first because there is some attempt to portray an existential crisis; the last because there is (rather less) attempt to show Walt getting his comeuppance), it is simply a celebration of the little man getting his own back on a world that has crushed him. I don't think it passes (or fails) the Tarantino test: is this an example of high intelligence and aesthetic sensitivity being used to give people permission to enjoy a gore fest?

Of course this is unfair. There are lots of details that could be looked at and teased out to support a competing, more detailed and more sympathetic narrative. But that's the point of Joe Bob criticism: popular culture doesn't work at the level of nuance and detail, but at the  broadbrush level of lesbo-fu and aardvarking. To pick just one aspect, I'm sure that there's a lot that could be said, based on a detailed analysis of scenes, that would support a benign view of family life and love in Breaking Bad. Certainly there is love and affection and loyalty. But the main lines of the fifty hours of viewing are that Walt prattles constantly on about 'doing this for his family' while drug dealing and murdering. It's hard to avoid the impression that the result of this is simple Pavlovian conditioning: traditional family values = high count on the vomit meter. (Any examples of non-dysfunctional families in Breaking Bad? Better Call Saul contains an all American soccer mum family at the centre of a long running embezzlement. Or perhaps the drug baron Tuco who loves his granny and makes sure she's undisturbed while he's bludgeoning his victims?)

And that I suppose is the point of this post. You can kid yourself all you want about the detail of this or that show or book, But all the best TV (and Breaking Bad is in many ways utterly brilliant) reinforces those main cultural messages. Family bad. Focus on me, good. You can do what you want. Be cool. Be a thug.

Doubt it? So who would you rather be: flabby, Ned Flanderesque Mr White? Or lean mean Heisenberg? 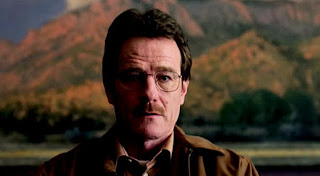 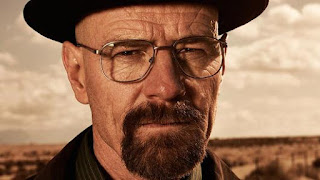