The local and the cosmopolitan 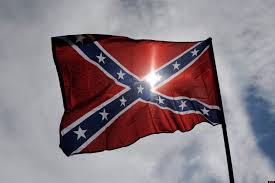 I'm not going to say anything specifically about the current drive in the USA to get rid of the Confederate Battle flag: there's too much in that rich soup of racism and local pride for an unwary and ignorant foreigner to choke on.

But combined with my current obsession with the history of Sanskrit cosmopolitanism in Language of the Gods in the World of Men, there is something more general to be said about the interaction between the local and the cosmopolitan. If one takes a broadly Burkean view of society and tradition (so, roughly, the idea that politics should be about preservation of a tradition and change about an organic development of that tradition), one is left with the worry about what happens if it seems that one's tradition is shot through with some essential corruption. (So here, putting aside any question of the truth of the claim, the assertion that the cultural traditions of the South are shot through with racism and nostalgia for slavery.)

Any worthwhile tradition has within it critical and reflective resources. So the South produces (eg) writers such as Walker Percy who is both Southern to the roots, and yet able to take (some sort of) critical stand on the neuralgic issues of race and slavery. It's hard to imagine, given human contrarianism, any large, literate region not throwing up at least some dissident voices. But the Catholic tradition does rather more than this: it institutionalizes those critiques as practices. Thus, as well as the (national) State, you have the transnational Church and the transnational Academy, each realised within a complex exchange of personnel and an international language (Latin). (This general sort of pattern carries on after a fashion well into (Protestant) modernity.)

Catholic nationalism should, therefore, carry within itself not just the theoretical possibility of an internal organic critique, but the internalisation of an external, radical critique: localism is always in a realised tension with cosmopolitanism and not just a theoretical one. Only when (or to the extent that) the nation state hermetically seals itself (by abandoning transnational religion, language and universities) is this internalisation of the external abandoned and reflection turned in on itself.

Modern cosmoplitanism is perhaps most obvious as Americanism. The language of cosmopolitanism is English. The cultural artefacts that carry cosmopolitanism are primarily Hollywood films and US TV. Putting aside the case of non-English speaking nations, Anglophone countries such as Scotland face a blurring of the local and the cosmopolitan: our values become simply those of every other liberal Anglophone progressive.


We hold these truths to be self-evident, that all men are created equal, that they are endowed by their Creator with certain unalienable Rights, that among these are Life, Liberty and the pursuit of Happiness.--That to secure these rights, Governments are instituted among Men, deriving their just powers from the consent of the governed, --That whenever any Form of Government becomes destructive of these ends, it is the Right of the People to alter or to abolish it, and to institute new Government, laying its foundation on such principles and organizing its powers in such form, as to them shall seem most likely to effect their Safety and Happiness. Prudence, indeed, will dictate that Governments long established should not be changed for light and transient causes; and accordingly all experience hath shewn, that mankind are more disposed to suffer, while evils are sufferable, than to right themselves by abolishing the forms to which they are accustomed. But when a long train of abuses and usurpations, pursuing invariably the same Object evinces a design to reduce them under absolute Despotism, it is their right, it is their duty, to throw off such Government, and to provide new Guards for their future security.


Indeed, modern Scottish progressive nationalism seems to have created a nationalism that, unlike previous ones, is characterised by a revolt against history, an identification of the Past Scotland as the very thing to be sloughed off in favour of a cosmopolitan future. (Something similar might be said of the revolt of modern progressive Ireland against De Valera and comely maidens.) But in doing so, it loses the tension required for an internal critique: it becomes solely a city of monoglottal speech, created by words, but not tested by local traditions. Moreover, it isn't a very deep cosmopolitanism, but one founded on soap operas and thrillers.

And so one surveys possibilities, (Others are available.) The ideal of a rich local tradition, internalising within itself practices which bring in a rich cosmopolitanism and the possibility of a more than organic critique. Or a hermetically sealed culture, not entirely unable to change, but trapped essentially within itself. Or a cosmopolitanism simply of words, free floating, untested by reality or other speech, windy.
Posted by Lazarus at 04:42