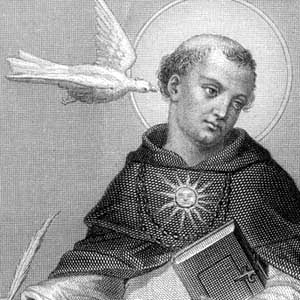 Many reminders today of what a rubbish Catholic I really am. First, the above image of the Holy Spirit as a kamikaze dove  rather amused me (in a thoroughly low way) in view of the reports of the Pope's dove of peace being attacked by a seagull. Beyond such avian high japes, second (or rather chronologically first), I had to be reminded of today's being St Thomas Aquinas' feast by The Bones. And this need for a reminder despite the fact that I have often banged on about Aquinas and, moreover, that his feast represents the anniversary of my last having taken Communion in an Anglican Church.

Oh well! Frailty of flesh and all that...

Having being spurred into action to say something today, why should Catholics and non-Catholics take Aquinas seriously? I had intended to say something very quickly about the 24 Theses and the canonical status of Aquinas within the Catholic Church. But having seen the post and ensuing comments about Thomism and the Magisterium from the Scotists at The Smithy, I just don't think I have either the strength or the detailed knowledge to do justice to that. So something a little more personal...

Like I suspect many UK educated Catholics, I came to Aquinas through academic study of ancient philosophy. Although the situation has changed a little in recent years, it's still generally true that someone studying philosophy at a UK university will undoubtedly encounter Plato and Aristotle as a core part of the curriculum, but will very likely not encounter Aquinas or Scholasticism except perhaps -and even then rarely- as an optional course somewhere along the line. So for me, certainly as an historical account of my development, Aquinas is Aristotle + Christianity, which is very much against that sort of interpretation of his works recommended by Gilson which takes him as a thoroughly Christian  philosopher where Aristotle is utterly transformed rather than added on to. (As such, I take myself to be much more in sympathy with the nineteenth century neo-Thomist manualists.) As a side effect of my educational background, I certainly tend to underestimate the differences between various forms of Thomism and even various forms of Scholasticism: it's all so clearly based in Aristotle's metaphysics etc that differences between Cajetan or Suarez or even nominalists or Scotists are much less striking to me than they probably should be.

But why should modern Catholics take Aquinas or even Scholasticism as a whole seriously? I think I'd give two main answers to that. First, the general intellectual space of Aristotelianism which they inhabit is a space that attempts to do justice to two insights. One is that we have to investigate to know: our knowledge comes, broadly speaking, from human experience. In that, of course, we have one foot in modern empiricism and stand opposed to the sort of raw fideism which has it that everything is in the Bible (or in some political commitment such as feminism). The other is that the nature of the world and the beings within it, particularly human beings, are rationally graspable: they make sense and can be articulated. Of course there's much more to say about why Aristotelianism specifically, but even those bare bones are enough to set it in opposition to a number of modern world views. (Within that general space, I'd put the key concepts as being form and matter, and act and potency. As a example of how they might contribute to a modern debate, see here.)

The second main answer is that every reflective adult has to start somewhere within a tradition: if you try and cover everything, you cover nothing. So the Catholic should start within that tradition of Scholasticism which offers an achieved attempt to resolve the various intellectual tensions that we are all subject to, in particular, the tension between revealed truth and natural reason. That will provide a solid foundation even if thereafter you find yourself moving beyond it. It is our tradition, and there is nothing else obviously available that offers anything like a comparable, detailed intellectual training which is compatible with theological orthodoxy. (That also strikes me as an obvious reason for at least beginning with the sort of Thomism developed by neo-Thomism: it has been developed as a pedagogical tool in a way that others varieties of Scholasticism haven't. But I put that aside rather as a suspicion more than a conviction I can fully justify.)


Anyway, whilst mulling over that, here's Aquinas' hymn, Pange Lingua:

Sing, my tongue, the Saviour's glory,
of His Flesh, the mystery sing;
of the Blood, all price exceeding,
shed by our Immortal King,
destined, for the world's redemption,
from a noble Womb to spring.
Of a pure and spotless Virgin
born for us on earth below,
He, as Man, with man conversing,
stayed, the seeds of truth to sow;
then He closed in solemn order
wond'rously His Life of woe.
On the night of that Last Supper,
seated with His chosen band,
He, the Paschal Victim eating,
first fulfils the Law's command;
then as Food to His Apostles
gives Himself with His own Hand.
Word-made-Flesh, the bread of nature
by His Word to Flesh He turns;
wine into His Blood He changes;
what though sense no change discerns?
Only be the heart in earnest,
faith her lesson quickly learns.
Down in adoration falling,
This great Sacrament we hail,
O'er ancient forms of worship
Newer rites of grace prevail;
Faith will tell us Christ is present,
When our human senses fail.
To the Everlasting Father,
And the Son who made us free
And the Spirit, God proceeding
From them Each eternally,
Be salvation, honour, blessing,
Might and endless majesty.
Amen. Alleluia.
Posted by Lazarus at 07:47