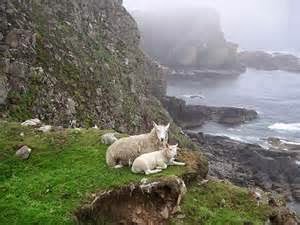 Sheep in despair at their future in a progressive Scotland.


I suppose I can't really avoid blogging again about Scottish Independence at some stage before the vote.

But come now, what blogger can blog by keeping ill-thought through and partly informed musings to himself? It is the very essence of the trade to utter forth without thought...

From a Catholic perspective, the principle of subsidiarity ought to weigh quite heavily on the independence side. If Chesterton can contemplate independence for Notting Hill, there is absolutely no reason why independence for Scotland is absurd. (Apparently both Gandhi and Michael Collins were inspired in their national struggles by Chesterton. No doubt our own First Minister is avidly pawing a copy of the Collected Works as we speak.)

Moreover, it is hard for Catholics -how to put this delicately?- not to feel just a little suspicious of that Protestant enterprise that is the Union and the Empire. Immersed in Scott just now, it is all too easy to see how the idea of a United Britain under a Protestant monarch is something that did not exist by nature, but had to be constructed as a solution to tensions, religious and national, that existed in the seventeenth and eighteenth centuries. To note its archaeology is to note its possible redundancy: are there many in the UK who think that its current governance is entirely satisfactory? Is it surprising that minds turn to alternatives? And what other really effective alternatives are there on offer? (I of course put aside the continual Lib Dem offers of giving cats votes or having elected street cleaners as their profound solutions to a constitutional crisis.)

On the other hand, it is naive to assume that breaking up an existing entity won't have costs. We can probably assume a certain period of governmental paralysis while the breakup is organized. We can probably assume a rather longer paralysis as the Scottish political landscape (politicians, reporters, civil servants, think tanks) stop acting like Stonybridge Town Council and grow into a national role. And that's not even to start thinking about the EU and the pound... Moreover, the idea of a UK state that, as a microcosm, embodies some of the ideas about international relations that are seen in the EU and the UN, and yet does it rather more effectively is not a vision to be sneezed at.

Putting all this aside, the Compendium of Social Doctrine  brings in an entity which really doesn't figure explicitly much in the current debate in Scotland. (I ignore the debate among certain London based figures who, having woken up to the fact that there is an Independence debate going on, seem to think it is merely an extension of the Krankies' Summer Tour, to be deal with by jokes about Tartan and What Scots Wear under the Kilt. Or perhaps a prolonged Caledonian sulk out of which we can be coaxed by an arm round the shoulder and a nice cup of tea.) That entity is the (or perhaps more exactly a) people. For example:

385. The political community finds its authentic dimension in its reference to people: “it is and should in practice be the organic and organizing unity of a real people”.

386. The primary characteristic of a people is the sharing of life and values, which is the source of communion on the spiritual and moral level. “Human society must primarily be considered something pertaining to the spiritual. Through it, in the bright light of truth men should share their knowledge, be able to exercise their rights and fulfil their obligations, be inspired to seek spiritual values, mutually derive genuine pleasure from beauty of whatever order it be, always be readily disposed to pass on to others the best of their own cultural heritage and eagerly strive to make their own the spiritual achievements of others.

387. For every people there is in general a corresponding nation...

Now -at least as far as I can see- nowhere does the Compendium define a people. Which leaves open the question: 'Is Scotland (or 'Are the Scots..') a people?' Being a people must be something to do with 'cultural heritage': that sense of a distinct, self reflective culture which is both different from neighbouring cultures and is also aware of, even proud of, those differences. Moreover, the Compendium emphasizes those parts of the heritage pertaining to the spiritual (so probably not tablet or Irn Bru then).

Does Scotland have a distinct spiritual culture anymore? A hundred years ago, I've no doubt you could talk about Calvinism, psalms, the Kirk etc. These days I suspect that if you could get past the initial problem of the meaning of 'spiritual', you'd be entering into the Scandiphile realm of the progressives:


Consider the policies which we’ve heard from the SNP/YesScotland/Radical Independence (delete as appropriate). We’ve been told that, in an independent Scotland, we’ll retire at 65 even if we’re only working half our lengthening lives.  We’ll continue to give automatic pay rises to public sector workers, who will keep their unaffordable pensions. We’ll renationalise Royal Mail.  We’ll drum out the nasty capitalist supermarkets and replace them with real, little, proper shops down the road.  We won’t reform public services, at all.  We won’t cut any spending, anywhere (but we’ll still manage to build a massive oil fund).  We’ll buy airports when they lose out to better competitors. `The rocks will melt with the sun’ before Scottish students contribute towards their university education.

Next we’ll be told there’s going to be a free unicorn for all children and a guaranteed rainbow every day.

It’s a great strategy for winning the referendum, and that’s what I admire about the campaign.  But it is, in the final analysis, a fundamentally anti-democratic strategy.  Anti-democratic, because it is becoming increasingly obvious that mainstream Yes support seeks power not on the basis of principle but only on the basis that it will be used to build a left-wing country.

Any politics worth a damn in the end has to say something about the supernatural end of human beings rather than just the natural end. The high noon of British Imperialism was structured by ideas of what it was worth killing and dying for, of civilized values and the pursuit of truth, beauty and goodness, however much those values were distorted. The strongly Communist undertow in earlier Scottish nationalist politics also spoke, paradoxically for a materialism, of values that transcended the mundane. Crudely, nationalism and unionism were about spiritual matters: about what makes life meaningful and what national identity we identify with, what sort of people we are.

If being a people (ie being Scottish) simply amounts to a preference for (broadly) traditional big state polices rather than the (slightly) less big state polices down South, I'm not sure that's really enough. (In a hundred years time, will such an identity make sense?) Part of the discontent with politics in the modern world is, I suspect, precisely a lack of such big, spiritual  questions in the public sphere. It's distinctly odd that, at a time when a really important decision about Scotland is being made, such issues have fallen even further into the background in favour of questions about where our banks will have their headquarters. (It's even odder, it might be thought, that the conservative right, the natural home of such bigger, religious questions, is almost completely silent in this area.)

There is another, alternative way of looking at this. The progressive element of the Nationalist camp do perhaps have a vision of spiritual values. On Day Zero, we will have a wholesale undermining of the remaining English elements of conservatism: abortion on demand, removal of the institution of marriage, enforced rearing of children by the state, abolition of the Monarchy etc etc. They are excited and, should there be independence, it will be their enthusiasm and commitment to a greater vision that will dominate an independent Scotland for the next generation while the rest of us get our act into shape. It is this sense that, when George Osbourne erects his custom posts at Berwick, we will be left on our own in a room with a bunch of Pat Kanes, that perhaps provides even the mildest conservative with the strongest reason to reject independence.