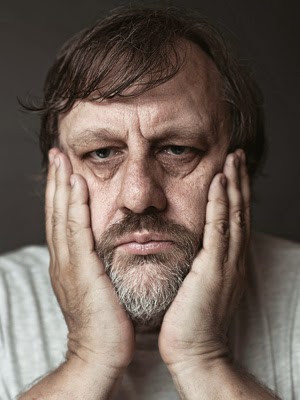 I try to avoid talking about Zizek, in part because I have an insufficient grasp of him and his influences such as Lacan to do him justice, but mostly because I can't work out how to get the correct diacritics onto his name. But needs must...

Zizek recently wrote an article for the Guardian on Rotherham in which (roughly) he took the opposite view to mine and argued that we needed to ask difficult questions about patriarchal attitudes to women in Islam rather than (my favoured position) just doing the police and legal work properly in dealing with crime and not worrying too much about the big sociological issues behind the abuse.

The problem according to Zizek:

The crucial feature in all these cases is that the violent act is not a spontaneous outburst of brutal energy that breaks the chains of civilised customs, but something learned, externally imposed, ritualised, part of collective symbolic substance of a community.

To put it simply, this sort of abuse goes to the heart of a culture rather than being an aberration. The solution?


So how are we to deal with all this in our societies? In the debate about Leitkultur (the dominant culture) from a decade ago, conservatives insisted that every state was based on a predominant cultural space, which the members of other cultures who live in the same space should respect. Instead of bemoaning the emergence of a new European racism heralded by such statements, we should turn a critical eye upon ourselves, asking to what extent our own abstract multiculturalism has contributed to this sad state of affairs. If all sides do not share or respect the same civility, then multiculturalism turns into a form of legally regulated mutual ignorance or hatred.

This is why a crucial task of those fighting for emancipation today is to move beyond mere respect for others towards a positive emancipatory Leitkultur that alone can sustain an authentic coexistence and immixing of different cultures.

Again, to put it simply, we need to work towards vision of fully emancipated culture within which we can all live. This will, inevitably, involve criticism and correction of unemancipated cultures such as Islam.

Now, I know that many readers have read some of my previous posts on Islam and written me off as an apologist for the religion. And to the extent that I think Islam and Muslims within the UK are being unjustifiably criticized in the media, I suppose I am an apologist. But perhaps my 'apologiae' will become clearer if we take up what Zizek says about Catholicism:


The same perverted social-ritual logic is at work in the cases of paedophilia that continuously shatter the Catholic church: when church representatives insist that these cases, deplorable as they are, are the church’s internal problem, and display great reluctance to collaborate with police in their investigation, they are, in a way, right – the paedophilia of Catholic priests is not something that concerns merely the people who happened to choose the profession of a priest; it is a phenomenon that concerns the Catholic church as such, that is inscribed into its very functioning as a socio-symbolic institution. It does not concern the “private” unconscious of individuals, but the “unconscious” of the institution itself: it is not something that happens because the institution has to accommodate itself to the pathological realities of libidinal life in order to survive, but something that the institution itself needs in order to reproduce itself.

In other words, it is not simply that, for conformist reasons, the church tries to hush up embarrassing paedophilic scandals. In defending itself, the church defends its innermost obscene secret. What this means is that identifying oneself with this secret is a key constituent of the very identity of a Christian priest: if a priest seriously (not just rhetorically) denounces these scandals, he thereby excludes himself from the ecclesiastic community, he is no longer “one of us”.

And we should approach the Rotherham events in exactly the same way...

In other words, just as Catholicism is essentially abusive, so are Pakistani Muslims.

When Zizek talks of paedophilia as being a phenomenon 'that is inscribed into its very functioning as a socio-symbolic institution' I struggle to make sense of this. I suspect a) that it is in fact a nonsensical claim (what is the 'unconscious' of an institution?); or at least b) it is a claim that requires long and critical debate before it could be thought plausible let alone true. (Come back and ask me in thirty years when we've all got the requisite work done on Lacan, Hegel and Aquinas.) But very many people are willing to countenance similarly dogmatic claims about Islam after thirty seconds thought: we know that Islam is a violent, patriarchal religion. (I'm afraid that I don't really know what a patriarchal religion is, let alone whether Islam is one of them.)

I conclude from all this what I've been regularly arguing in the past. At best, the sort of theological and sociological arguments about what Islam is or isn't, will take an awfully long time to complete (and frankly, I don't think they are the sort of arguments that ever can be completed: to borrow Bryce Gallie's term, the concepts involved are 'essentially contested'). In short, they are not the sort of arguments that can feed directly into political or legal action. In the meantime, there are all sorts of short term, immediate responses that will help: listen to victims; do evidence gathering properly; don't get complacent about your failings. At worst, the sort of knee jerk reactions to Islam and Muslims in the UK that are being seen at the moment will lead to 'a  positive universal project' that will sweep up everyone in its Black Maria of progress who doesn't buy into every jot and tittle of modish secularism.