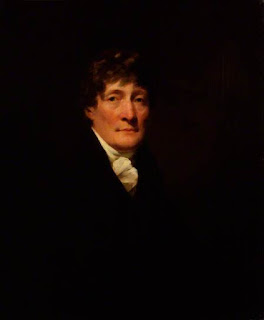 Those who have been reading this blog for a while may have wondered where I was in my reading of Sir Walter Scott's complete works. The short answer is that I am roughly 80% through and now in the middle of his journals...

In my last post, I commented on Nick Cohen's problematic use of 'Enlightenment values'. Scott touches on the Scottish Enlightenment a number of times in his works (I'm particularly tempted to write something on the Burkean principles of his essays on improving woodland) but I recently came across this in his review of MacKenzie's biography of John Home (writer of the Douglas):

Neither is it only to Scotland that these annals are interesting. There were men of literature in Edinburgh before she was renowned for romances, reviews, and magazines--

and a single glance at the authors and men of science who dignified the last generation, will serve to show that, in those days, there were giants in the North. The names of Hume, Robertson, Fergusson, stand high in the list of British historians. Adam Smith was the father of the economical system in Britain, and his standard work will long continue the text-book of that science. Dr. Black, as a chemist, opened that path of discovery which has since been prosecuted with such splendid success. Of metaphysicians, Scotland boasted, perhaps, but too many: to Hume and Fergusson we must add Reid, and, though younger, yet of the same school, Mr. Dugald Stewart. In natural philosophy, Scotland could present Professor Robison, James Watt, whose inventions have led the way to the triumphs of human skill over the elements, and Clerk, of Eldin, who taught the British seaman the road to assured conquest. Others we could mention; but these form a phalanx, whose reputation was neither confined to their narrow, poor, and rugged native country, nor to England and the British dominions, but known and respected wherever learning, philosophy, and science were honoured.


It's worth noting a few points here. First, nowhere is the term 'Scottish Enlightenment' or even 'Enlightenment' mentioned. This is to be expected as Wikipedia notes:

The term "Enlightenment" emerged in English in the later part of the 19th century, with particular reference to French philosophy, as the equivalent of the French term 'Lumières' (used first by Dubos in 1733 and already well established by 1751). From Immanuel Kant's 1784 essay "Beantwortung der Frage: Was ist Aufklärung?" ("Answering the Question: What is Enlightenment?") the German term became 'Aufklärung' (aufklären = to illuminate; sich aufklären = to clear up). However, scholars have never agreed on a definition of the Enlightenment, or on its chronological or geographical extent. Terms like "les Lumières" (French), "illuminismo" (Italian), "ilustración" (Spanish) and "Aufklärung" (German) referred to partly overlapping movements. Not until the late nineteenth century did English scholars agree they were talking about "the Enlightenment."

Secondly, Scott conceptualizes 'the Enlightenment' in personal ('the authors and men of science who dignified the last generation') and local terms ('their narrow, poor, and rugged native country'). In other words, it is a circle of very talented and different individuals who were in regular and friendly intercourse with each other despite (or even because of) their great differences. (That impression in only reinforced by the extended anecdotes especially about David Hume, Adam Smith and Adam Fergusson taken from Home's biography which are quoted in the rest of the review.)

Thirdly, the 'Enlightenment' is centred on effectiveness and practicality (' who taught the British seaman the road to assured conquest') rather than abstract ideas ("Of metaphysicians, Scotland boasted, perhaps, but too many").

I doubt whether any of this is a surprise to anyone who has read anything about 'the Scottish Enlightenment'. But there are far too many who are willing to convert 'the Enlightenment' into a banner under which (eg) unrestrained free speech of the coarsest variety can be justified. Whatever the merits of such a view, it is not the same as the culture of a circle of talented men 'known and respected wherever learning, philosophy, and science were honoured'. Although I'm thinking here particularly of secularist blowhards such as Nick Cohen, you will also find a tendency to essentialize (and reject) Enlightenment values in conservative Catholic circles (ie mine). I'm certainly not suggesting that the views of lightly sceptical Scottish Protestants will ever fit neatly into a Catholic world view, but, equally, I certain that it is intellectual suicide to hand over uncontested to the secularists an important part of the intellectual history of modernity.

Free and cordial communication of sentiments, the natural play of fancy and good-humour, which prevailed among the circle of men whom I have described. It was very different from that display of learning -that prize fighting of wit, which distinguished a literary circle of our sister country...

So let's celebrate some of the values of the Scottish Enlightenment: to honour substantive learning, philosophy and science rather than the ill tempered shallowpate; to be sceptical of dogmatic political fashions and prize the conservatism born of a deep reading in history; to celebrate conviviality, friendship, religion and national pride, rather than deracinated rage of pure subjectivity. Oh, and reticence and tact as well:

The celebrated David Hume, the philosopher and historian, was certainly the most distinguished person in the cycle [sic]. That he was most unhappy in permitting the acuteness of his talents, and the pride arising from the consciousness of possessing them, to involve him in a maze of sceptical illusions, is most undeniable; as well as that he was highly culpable in giving to the world the miserable results of his leisure. Mr Mackenzie states, in mitigation, not in exculpation, that the great Pyrrhonist--

"had, in the language which the Grecian historian applies to an illustrious Roman, two minds, one which indulged in the metaphysical scepticism which his genius could invent, but which it could not always disentangle; another, simple, natural, and playful, which made his conversation delightful to his friends, and even frequently conciliated men who principles of belief, his philosophical doubts if they had not power to shake, had grieved and offended. Duirng the latter period of his lfe, I was frequently in his company amidst persons of genuine piety, and I never heard him venture a remark at which such men, or ladies -still more susceptible than men -could take offence. His good-nature and benevolence prevented such an injury to his hearers: it was unfortunate that he often forgot what injury some of his writings might do to his readers."

The WR Scott book was published in 1900 -which put the first use of the 'Scottish Enlightenment' even later than I suggested above. ]