Hannukkah, the Consultation on Marriage, and Tina Beattie 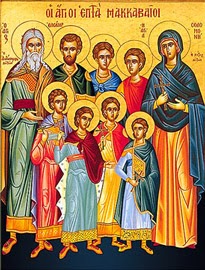 The Jewish festival of Hannukah starts today. The exclusion of the books of the Maccabees  by Protestants may well have resulted from sincere theological doubts about their place in the Canon, but a consequence of this act has been a downplaying of the place of revolt against governments in the life of the Church, and, more generally, of the importance of resistance to a dominant culture.

Much of the substance of the Books of the Maccabees can be reduced to a struggle to resist the imposition of a dominant, Hellenistic culture on Jews:


13 Then certain of the people were so forward herein, that they went to the king, who gave them licence to do after the ordinances of the heathen:
14 Whereupon they built a place of exercise at Jerusalem according to the customs of the heathen:
15 And made themselves uncircumcised, and forsook the holy covenant, and joined themselves to the heathen, and were sold to do mischief. (1 Maccabees 1: 13-15).

That struggle against Hellenism is analogous to the modern struggle of Catholicism against a secular culture. All sensible people in the Mediterranean world knew that to be well educated and decent, you had to be Hellenized, worship a variety of gods, join in with the homoerotic cult of the male body, and place the will of the state above that of your traditions. Equally, all sensible people now know that worshipping God is silly, that only the old fashioned think there is anything wrong with screwing around, and that vox populi, vox dei. (If there were a god of course.)

I have absolutely no intention in indulging in the traditional sport of Beattie baiting. But taking up Tina Beattie's contribution (here) to the Vatican consultation on the family in the spirit it was explicitly offered -'to share some ideas and arguments'- and as representative of what loosely be termed 'liberal opinion', I am struck by two points in particular. Firstly, there is an emphasis on personal experience. In one way, that's fine: there is absolutely nothing wrong in explaining (for example) how incredibly difficult it is to live out the Church's teachings on the family and marriage in an environment that is either actively hostile or simply oblivious to an alternative, non-secular approach. I was particularly struck by her answer to the question:


How successful have you been in proposing a manner of praying within the family which can withstand life’s complexities and today’s culture?

This question makes too many assumptions about the kind of Catholic life many of us experience in modern families and marriages. I pray for my family every day, but I do not pray with them because my husband is not a practising Christian and my children have all left the Church. I firmly believe that we learn our attitudes to culture and our values by example. I know families who pray together whose values I would not want to emulate, and others who do not pray together but who are inspiring in their values and lifestyles.

Now, I have sympathy here. Although that isn't my family situation, we haven't escaped the influence of a society which is profoundly hostile to religious practice and particularly to Catholicism. (I speak of Scotland but the situation is a common one in much of Western Europe.) And let's be exact about that: I haven't escaped that influence. I have failed and I go on failing. And perhaps the worst part of that is tracing the effects of my failures on my children. My children still practise -but I don't think I've done terribly well in passing on the fullness of Catholicism. Part of experience is the experience of failure and the correct emotional response to that failure: when I look at my broken life, I feel regret and guilt. And that element of the self-critique of experience -that I get it wrong and that I am a sinner- seems to be totally lacking here. Such an attitude of critical humility seems an essential part of Christianity, and it problematizes the idea of 'experience' as a criterion of theology. In the present case, if my experience is one of brokenness, I need to experience it as brokenness and failure, rather than pretending it is evidence of a different sort of goodness. (Mightn't a shorter, more straightforward answer be here, 'pretty unsuccessful'? That would be my first response to my own situation even though, admittedly in a pretty scrappy fashion, we have succeeded in maintaining some sort of communal prayer life.)

Secondly, there is running throughout the response (and the accompanying post and linked material) a rhetoric of power. Although there is a superficial narrative about resistance to the domination of Vaticanparatchiks on behalf of an oppressed laity (eg: the linked 'Catholic Scholars Statement' talks about a previous consultation where 'only carefully hand-picked members of the laity were invited. They offered no critical voice and ignored abundant evidence...') there is an underlying narrative about the deepness of theological thought being frustrated by an authoritarian Church. The Catholic Scholars' Statement is most evident here: its very title and the litany of academic positions and institutions soothes the unwary reader into a sense that scholarship is on one side, and the '(almost) Dead White Men' of the Vatican on the other. The problem with this is that it ignores how such academic power is constructed in the modern West: you don't get academic positions without (eg) an itch to 'make it new' rather than simply hand on traditional scholarship; you don't get academic positions unless you can speak the language of secular thought, eg, the Lacan of Beattie's latest book on Aquinas or feminist ideology. Again, such reflections problematize 'experience': what I think of the world is the result of a long process of formation in a society that we know is severely damaged; and, narrowly, such experience is often elicited and articulated by a cultural elite that is itself the result of a hugely problematic formation.

Of course, such reflections can't be the final word. I know what I'd reply to them on Beattie's behalf ('what about how authority in the Church is constructed, eh?'). And the whole whirligig of academic reflection and dialectic goes on which, in itself, can be a de facto admission of the abandonment of authority: to get down and dirty with the philosophers even in defence of authority is to an extent an acceptance of the inferiority of authority to that ongoing dialectic. There is no easy answer here: the solution is neither fideistic rejection of reasoning, nor the abandonment of Magisterial teaching. Salvation is, in the end, a matter of grace, which is to say that it exceeds the description of language and human reflection. But the Maccabees remind us that, whatever that most magnificent, deep, philosophical culture of Hellenism (or even its shallower offspring, modernity) might be saying to us, sometimes our duty is much, much simpler:


1 It came to pass also, that seven brethren with their mother were taken, and compelled by the king against the law to taste swine’s flesh, and were tormented with scourges and whips.
2 But one of them that spake first said thus, What wouldest thou ask or learn of us? we are ready to die, rather than to transgress the laws of our fathers.
3 Then the king, being in a rage, commanded pans and caldrons to be made hot:
4 Which forthwith being heated, he commanded to cut out the tongue of him that spake first, and to cut off the utmost parts of his body, the rest of his brethren and his mother looking on.
5 Now when he was thus maimed in all his members, he commanded him being yet alive to be brought to the fire, and to be fried in the pan: and as the vapour of the pan was for a good space dispersed, they exhorted one another with the mother to die manfully, saying thus,
6 The Lord God looketh upon us, and in truth hath comfort in us, as Moses in his song, which witnessed to their faces, declared, saying, And he shall be comforted in his servants.
7 So when the first was dead after this number, they brought the second to make him a mocking stock: and when they had pulled off the skin of his head with the hair, they asked him, Wilt thou eat, before thou be punished throughout every member of thy body?
8 But he answered in his own language, and said, No. Wherefore he also received the next torment in order, as the former did.
9 And when he was at the last gasp, he said, Thou like a fury takest us out of this present life, but the King of the world shall raise us up, who have died for his laws, unto everlasting life.
10 After him was the third made a mocking stock: and when he was required, he put out his tongue, and that right soon, holding forth his hands manfully.
11 And said courageously, These I had from heaven; and for his laws I despise them; and from him I hope to receive them again.
12 Insomuch that the king, and they that were with him, marvelled at the young man’s courage, for that he nothing regarded the pains.
13 Now when this man was dead also, they tormented and mangled the fourth in like manner.
14 So when he was ready to die he said thus, It is good, being put to death by men, to look for hope from God to be raised up again by him: as for thee, thou shalt have no resurrection to life.
15 Afterward they brought the fifth also, and mangled him.
16 Then looked he unto the king, and said, Thou hast power over men, thou art corruptible, thou doest what thou wilt; yet think not that our nation is forsaken of God;
17 But abide a while, and behold his great power, how he will torment thee and thy seed.
18 After him also they brought the sixth, who being ready to die said, Be not deceived without cause: for we suffer these things for ourselves, having sinned against our God: therefore marvellous things are done unto us.
19 But think not thou, that takest in hand to strive against God, that thou shalt escape unpunished.
20 But the mother was marvellous above all, and worthy of honourable memory: for when she saw her seven sons slain within the space of one day, she bare it with a good courage, because of the hope that she had in the Lord. [2 Maccabees 7: 1-20]

Of course, removal of the Books of the Maccabees was done for the best possible theological reasons rather than to discourage discontent with the existing order.  But Max Romeo wasn't convinced: