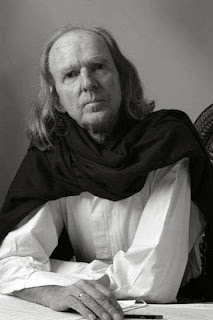 Eternal rest grant unto him, O Lord, and let perpetual light shine upon him. May the souls of the faithful departed, through the mercy of God, rest in peace. Amen.

John Tavener had an unusual public prominence for a serious composer. When one considers those modern composers who've made some sort of wider impact in a culture that, generally, is pretty hostile to the practice of art music, it's striking how many of them have a strong element of spirituality in their music. In Scotland, James MacMillan is well known as a devout Catholic. Arvo Pärt is a member of the Russian Orthodox Church. Philip Glass is apparently a 'a Jewish-Taoist-Hindu-Toltec-Buddhist'. And the popularity of Gregorian Chant, Bach and assorted settings of the Mass all testify to a hunger for some sort of religious/spiritual element in music.

Tavener's own spiritual journey is summarized by him as follows:


There were three stages. There was the Presbyterian stage, and I can’t say that was all totally negative because I met some of the pastors of that time and one in particular impressed me tremendously. His humanism and his doubts impressed me.
Then there was the Catholic stage and the Spanish influence. Particularly mystics like St John of the Cross and St Teresa of Avila. Even the composer Vittoria. They were enormously important to me, and still are. If I go to the Maundy Thursday service I still weep.
There was the influence of Metropolitan Anthony [the late head of the Russian Orthodox Church in Britain and Ireland] and things Russian as well. I married a Greek when I was 30 and fell in love with Greece – the culture, the religion and everything connected. I also felt that Greece was a country that still had a sense of the primordial.
Much later on, when I was married again, I had a vision of Frithjof Schuon, the universalist philosopher. He started out a Protestant and at 30 was a Sufi. He always embraced all religions. It’s rather wild-sounding story, but it seems perfectly natural to me. It was after an American Indian holy man had come here [to his house in Dorset]... and brought me the gift of a pow-wow drum. He played the drum to me and said having it in the house will bring miraculous events. After he left I had a vision of Schuon who seemed to be saying to me that God was revealed in different ways and that I should somehow stick to Christianity in terms of personal life but I should express my interest in other religions. [Full interview in Catholic Herald, here.]

He talks in the same interview of (organized) religion as having gone 'senile' and the solution lying in 'a return to the heart, away from the mind. A sense of prayer within the heart.'

Although the question of 'secularization' is a much vexed one in religious studies, there appears little doubt, in Western Europe at least, that organized religion has declining social impact. On the other hand, there is really little evidence that spirituality is declining. For example, take those declaring 'no religion' in recent American studies:

A far more important indicator, as many recent studies—including the Baylor National Religion Surveys—have found, is that those who say they have no religion are surprisingly religious. Most say they pray, and a third even report having had a religious experience. Half of these respondents who would be considered by survey takers to have “no religion” believe in angels. [Article here.]

Attacks on this 'spirituality instead of religion' understanding of secularization (such as Steve Bruce) are careful not to conflate claims about institutional decline with claims about cultural decline: thus, in Bruce's Secularization: In Defence of an Unfashionable Theory he avoids making claims about cultural spirituality (evidence, for example, in the proliferation of entertainment based on supernatural stories), instead focusing his attention on the decline of institutional religion and institutionalized spirituality: certainly, formal New Age practice isn't going to replace institutional Christianity, but that's very different from claiming that spiritual interests and desires are disappearing.

'Spirituality' is of course a baggy term, but it at least covers a widespread sympathetic interest in religions and a variety of rather vague beliefs and practices. I'd guess that the national religion is Scotland now is probably nearer Sheilalism rather than Presbyterianism:

I believe in God. I'm not a religious fanatic. I can't remember the last time I went to church. My faith has carried me a long way. It's Sheilaism. Just my own little voice...It's just try to love yourself and be gentle with yourself. You know, I guess, take care of each other. I think He would want us to take care of each other.


This broadly all fits in with what a Catholic understanding of natural religion might expect. In broad terms, 'natural religion' is what people come up with if left to their own devices in the absence of revelation. [Here.] I suspect that many Scots would also probably talk in terms of believing in 'something' rather than God.

If true, this has a number of implications. Perhaps the most immediate one, in the Scottish context, is that the recurrent attempt by the various atheist movements such as the Scottish Secular Society to drive religion out of the public space might well generate public support insofar as they are attacks on the influence of organized religions such as the Church of Scotland, but have less support insofar as they are attempts to create a spirituality free Dawkinsian space: it's important that widespread suspicion of organized religion isn't used by hardcore atheists for destroying natural religion as spirituality. The latter is an inadequate response to the divine, but inadequate is better than nothing. (And so 'Time for Reflection' is a sensible rebranding of 'religious observance' in non-denominational schools.)

For Catholicism, the implications are trickier. It's important that we recognize the good in spirituality: this sort of natural religion is the response of human nature to the reality of the spiritual world and life and shouldn't be dismissed out of hand. On the other hand, the Church believes itself to possess the full revelation of God: it mustn't allow that treasury to be watered down because that revelation makes further demands on us than are readily accepted by those who are merely 'spiritual': a great part of the pernicious influence of the Spirit of Vatican II is a result of reducing Catholicism to a merely natural religion.