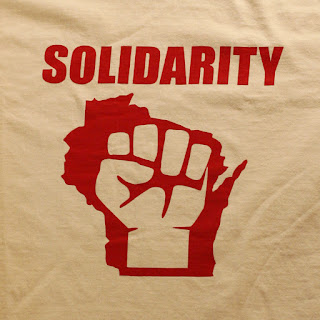 One of the words I'd like to hear used rather more by socially conservative commentators is that of 'solidarity'. Too often it's captured by the left -ironically in the service of a social fragmentation that pits sub-group agaist sub-group- or ignored by the right in favour of an eristic capitalism and Darwninian culture.

The term “solidarity”, widely used by the Magisterium, expresses in summary fashion the need to recognize in the composite ties that unite men and social groups among themselves, the space given to human freedom for common growth in which all share and in which they participate. The commitment to this goal is translated into the positive contribution of seeing that nothing is lacking in the common cause and also of seeking points of possible agreement where attitudes of separation and fragmentation prevail. It translates into the willingness to give oneself for the good of one's neighbour, beyond any individual or particular interest. [Compendium of Social Doctrine, s.194 here]

There's a lot to be said here, but for the moment let's focus on the relationship between hierarchy and solidarity. As a rather chippy scion of White Van Man, I confess to a visceral loathing of hierarchy: I am in no doubt as to where my ancestors would have fitted into the squirearchical order and harbour a strong and not flattering suspicion as to where I actually fit. But balanced against this emotional reaction is the recognition of the importance of hierarchy to much existing conservative thought. How then to reconcile these competing perspectives?

It is fairly obvious that human beings differ greatly in their accomplishments and potentials. It is simply for that reason of realism that conservatives must reject an easy slogan of equality: to accept an equality which obscures the natural differences of people is simply a lie. On the other hand, recognition of our supernatural end and of our infinite individual worth to God also compels rejection of an easy abandonment of individuals to the scrapheap. Perhaps two key insights are these: we are all in this together and the world's judgment of worth is not God's. To the jaundiced conservative observer, much left wing politics looks like the barest Nietzschean will to power camouflaged by pious phrases: progressive leaders prattle on about equality while wringing out the system to procure social and monetary advantages for themselves. In recent times, the powerful progressives seem more and more animated by a feeling that they are not in it together with us: we are gammon, oppressors, the benighted; they are the vanguard, the blessed by history who will at best force us to act according to their will or at worst destroy us to allow their freedom.

Hierarchy can be seen as an attempt to humanise and mollify the general human urge to power and particularly that of the aggressive and naturally capable. By institutionalising rank and fitting it into a narrative of duty and being part of a community which it rules, the animal urges of power and aggression are fitted into a more humane and indeed divine order. It is, at the very least, power made obvious: instead of the Hampstead's liberal pretence of equality, there is a frank admission that, in some ways, we are not in this together, and that these differences can only be transformed with difficulty into social solidarity by imposing reciprocal and socially binding duties on the haves and have nots.

There is finally an irony about traditional hierarchy, a sour trick played on the alphas of our society of which they are half conscious in a conservative society but wholly unconscious in a secular one. Due to the subordination of the natural end to the supernatural end, those who rule politically (let alone captains of business or other movers and shakers of the polis) are subordinate to those who are close to God: the merest beggar may be of more importance in the true reality of the universe than the highest politician. Traditional hierarchies are, in Plato's terms in Book 8 of the Republic, a timocracy, government by honour. Unlike the truly (but unachievable) best society, where the truly good person (the saint) would rule, the timocratic society is a shadow of that best, unachievable society and one which pays honour to the appearance of virtue rather than to its reality. Crudely, by stuffing the mouths of the socially competitive with ermine and titles, they are flattered into becoming socially useful rather than simply using their power to bleed the rest of us. And yet, the shadow of the truth haunts them and calls them to something better, constantly reminding them that they are being paid in baubles which will not be the currency of their final, supernatural end. (A certain silliness in the get up of the traditional hierarchy is an essential part of its function: the best argument for the judiciary, for example, wearing large and uncomfortable wigs is not just that it is imposing, but also that it reveals a certain pantomimic quality to the things of this world.)
Posted by Lazarus at 07:46