Milla Jovovich and the end of Western civilization

Go ahead, steampunk, make my day…

The release of a new version of The Three Musketeers is a further example of how the film industry is ushering in the apocalypse.

Well, all right, this is a bit strong. It’s not a great version, but if you like loud, dumb movies with the beautiful Milla Jovovich in a key role, it’s actually quite enjoyable. But the specific steampunk aesthetic of the film is worth thinking about in a little more detail.

Steampunk is based on the combination of incongruous elements, thereby emphasizing an idea that reality is made, not found. In the case of steampunk, the elements are usually Victorian settings and modern technology, although that technology is reinvented through a Victorian prism (so steam driven computers etc). The Three Musketeers takes a sumptuously imagined seventeenth century French background, and combines it with anachronistic elements such as flying sailing ships to provide a loosely steampunk experience. 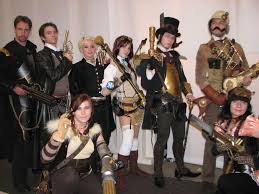 Much of the charm of steampunk is from glamour and style: a slightly, gothic, romantic look which would probably have many Traddy Catholics nodding in sympathy. But added to that is the pleasure of undercutting and subverting expectations: by mixing in re-invented technology, what would otherwise be a simple costume adventure is made more ironic, more detached, more knowing –more postmodern.

So what has all this to do with (or at least the issue of Catholic wisdom)?

Firstly, it reminds us about the link between morality and imagination. Works of art (or even bog standard artefacts such as commercial films) express a view of the world, and also reinforce and create a view of the world. Steampunk both reflects and reinforces the idea that nature is made, not found. That is not just an aesthetic matter, but also a moral one.

Relatedly, it is about the pleasure of mucking things around and in particular mucking the past and nature around. Steampunk mucks stuff around by not simply reproducing the past, but remaking it. Moreover, it introduces technology (more human mucking around) into nature where it previously wasn’t. (And then it mucks that technology around for good measure.) This mucking around is extended into gender: Milla Jovovich is (clearly and glamorously) female. She also throws herself around like a Ninja and beats men up.

I don’t really think Milla Jovovich is ushering in the apocalypse. (Given the lack of humour of some anti-Catholic trolls, that’s probably a point worth making clear.) Steampunk isn’t a big enough social movement from which to start drawing many conclusions about the wider culture rather than using it to illustrate facets of that culture found more generally. In the end, it’s mostly play and fantasy and they aren’t always bad things. But nevertheless, steampunk does demonstrate key aspects (the rejection of nature, of tradition and an unwillingness to leave things alone) that are at the core of modernity’s difficulties in grappling with Catholic moral teaching.

How we see the world affects how we act in the world: aesthetics are not neatly separable from morals. Seeing the world as constructed and mucked around is not a good basis for natural law teaching. And the audience the Church has to address has been soaked in such an aesthetic.