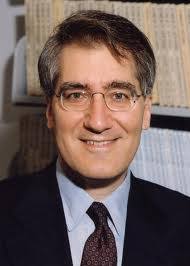 
One of the issues this blog is going to be banging on about is the need to bring natural law thinking -that is, the tradition of reflection on human nature and its moral implications rooted in Graeco-Roman philosophy which is the basis of Catholic moral theology-  into Scottish politics.

An example of one way to do it is given in this New York Times interview with Robert P. George -a jurisprudent and philosopher at Princeton- who has also become an influential public figure in conservative politics in the US. Clearly not something that can simply be parachuted into a Scottish context, but still raises the question as to why social conservative thinking in Scotland is currently so feeble. (There are honourable academic exceptions such John Haldane but they have extremely limited influence within party politics and the chattering classes here.)

Couple of thoughts on the interview:

1) At times the writer suggests that George has reinvented natural law thinking. I'd prefer to regard it as developing his own engagement with it: natural law thinking is a tradition and within any worthwhile tradition, there will be competing and mutually critical views which, however, will share an underlying focus and general methodology.

2) Within a Scottish context, the identification of this strand of thinking with one party -the Republicans in the US- is probably both unachievable and undesirable. Catholic and other orthodox Christians exist in all the main Scottish parties: equally, social conservatism (certainly in the area of sexual morality) ought to have an honourable and articulated place within those parties. At the moment, we seem to have a rather ironic re-application of the 'don't ask, don't tell' policy to any view (religious or otherwise) which doesn't fit into laissez-faire sexual liberalism.
Posted by Lazarus at 06:38