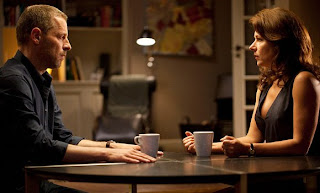 Saturday night domi Lazarorum is (or rather was given that it ended this week) Borgen night. I'm not sure that this Danish TV series about the travails of a fictional woman Prime Minister is actually any better than the best British TV, but it does have that undeniable glamour of just being foreign. Anyway, me and the missus like it.

The tenth episode and series conclusion had Phillip, the Prime Minister's husband, storming off, having an affair and demanding a divorce. Judging from what I can glean from google translations of Danish descriptions of series 2 (not yet screened in the UK), all does not end well even if hope of a resolution to their personal problems is not entirely ruled out (eg here).

Much of the interest of the series is in the juggling of personal life and political career that many of the central characters  attempt. In the case of Birgitte (the PM) and Phillip, despite the obvious strains of being a PM and trying to be a wife and mother, they appeared to have being doing a reasonable job of it.

But then Phillip gets a bit sick of being in second place, gets a high powered job as a CEO, and then is forced to resign by his wife because there is a clash of interests with her duties as PM. He tears off, bonks the headhunter who found him a job, and then decides he wants a divorce after muttering some fluff about wanting to preserve the memory of the better times they had.

In all the discussions leading up to this announcement, I can't remember a single mention of duty and sacrifice and keeping promises made at their marriage. I can't remember a single occasion when letting his wife down (he leaves her with no clue as to where he is while she attempts to run the country and find clean clothes for the kids) or letting his children down is articulated as a big issue. Certainly Birgitte was not terribly tactful in telling him to resign, but come on, the poor woman was knackered and under extreme political and personal pressure!

Duty -and the deontological approach to ethics from which it derives- is an essential part of communal life. In the political aspects of Borgen, this is recognized: Birgitte often has to do certain things because she has to as PM, not because she wants to. But within the family, this seems to have been forgotten. I don't know how, in the fictional world of Borgen, Phillip and Birgitte should have resolved their problems. I don't know how, in the real world, men and women should juggle the terrible tensions of work and family, particularly in the crucible that is politics. But I do know that any conversation in these areas that forgets the concepts of sacrifice and duty is an impoverished one and one where divorce is an almost inevitable consequence.

Turning this back to the current same sex 'marriage' consultation, if you think of marriage as Borgen does, as a relationship which you stay in only as long as you personally are enjoying it, then all this -same sex 'marriage', men going off if they get a bit hacked off or see a younger, less threatening prospect- makes sense. But that view simply doesn't work: marriages based simply on feeling good won't work, anymore than a PM who did what she felt like in running the country wouldn't work. Only if marriage is seen as an institution which has a function to perform -the proper bringing up of the next generation and the mutual support of the parents who have made the sacrifices necessary to do this- and, as a consequence, requires the acknowledgement of certain pledges and duties, does it make sense and will therefore survive.

Borgen episodes are (currently) available on BBC  iplayer here.
Posted by Lazarus at 00:52