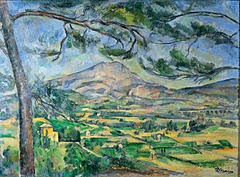 There are a great many things I don't like about blogging (the sound of my own voice -or whatever the correct digital, visual equivalent is- rambling on in feeble imitation of professional commentators can be just as grating for me as it is for you, dear reader), but one of the things I do like is the possibility of bringing out the interplay of the personal and the academic. I am, for example, quite happy to admit that, on most (all?) subjects, I write having entered in medias res and will stop writing ex mediis rebus: we always stand a little unsure of the dimensions of the room we inhabit and we never quite get a firm sense of the contents of that room. (But that doesn't stop us talking. Oh Lord, not in the slightest.)

And so, Cezanne. Brought up in a lower middle class, pretty philistine home, we just didn't do the visual arts. (Actually, I'm not sure we did much of anything except TV.) And not having any natural abilities in that area, I just didn't pay much attention to painting and the like until undergraduate courses on aesthetics forced me to engage. I remain pretty ignorant, not really even knowing what I like. But as I get older, I find the enjoyment of paintings, the sensual enjoyment of seeing, incredibly satisfying. I suppose this is all to say I dabble. And Cezanne, for a variety of reasons, is one of those painters I find most satisfying to dabble in...

When I realized that today was Cezanne's birthday, I turned to the Alex Danchev biography of Cezanne to find something helpful to tweet. And knowing that Cezanne was a daily mass goer, I thought I'd probably say something about that. So to Danchev's index. Nothing. Absolutely nothing on Catholicism. Freud, of course. Heidegger. Hegel. Even Billy Whitelaw. But nothing under 'Catholicism' or 'Mass' or 'God' or 'Christ' and so on. I did (by dint of extensive flipping) find the following exchange (p291) where Danchev contrasts his understanding of Cezanne with that of earlier biographers:

It constructs a helpless, almost childlike Cezanne in his dotage, a political simpleton, a preconscious pilgrim, clinging to le bon droit in all its forms -the Church, the State, the Army -even the Boers...It is tone deaf, to wit and to wisdom. 'I'm going to get my helping of the Middle Ages,' he would whisper, mischievously, near the font. 'To be a Catholic,' he told his son, near the end, 'I think one has to be devoid of all sense of fairness, but to keep an eye on one's own interests.'

And that, so far as I can see, is that: one paragraph exemplifying as much as noting a tone deafness to wit and to wisdom. (If you can't imagine all sorts of ways in which a devout Catholic might mischievously speak thus without stopping being a devout Catholic...) The reviews of the book (the Guardian here; Telegraph here; Waldemar Januszczak here) neither mention religion (which suggests that I'm not missing something in the biography) nor suggest that this is a failing (which suggests that Danchev is not atypical).

All this is particularly strange in that Cezanne is quite clearly an artist who is engaging in that very Catholic thing of trying to find form in the world: a form, not with the accretions of tradition or French bourgeois seeing, but 'the dearest freshness deep down things'. And coupled with a purification of the see-er, we have almost a perfect case study of Catholic art and the encounter of French Catholicism with modernity. (I look up Bernanos, Peguy. They're not there either. Weil gets a one line mention -but a throwaway (and certainly no reference to her religion).)

Googling a little more, I find this essay by Patrick Reyntiens. Reassured to notice that I'm not going mad in noticing something is a little odd here:

An aspect of Cezanne's personal life not much harped upon is that he was a staunch Catholic. He was a daily Mass-goer. Such aberrations are best left unemphasised in the structure of the myth of the Modern Movement. But it explains a great deal. Cezanne's religion, however conventional it may or may not have been, constituted the prime basis for his sense of identity, stability and personal probity. This in turn fuelled his obsession with painting to heroic lengths.

None of this matters much to Catholics, at least educated ones. I guess most of us are used to suspecting the airbrushing that goes on in cultural history (my children tease me for my adding, when possible, 'He's a Catholic' to any passing description of this or that celebrity) and can look (search) past it. But if you enter this world in medias res, unless you're a Catholic on the look out for lacunae, you find yourself in a world that has been scraped of its Catholicism in the same way that Protestant reformers scraped our churches of paintings and colour; and, unless you have it continually pointed out to you, you start to think that the normal state of the world is this barren remnant, smashed ruins being mistaken for the complete original. Cezanne's a small, relatively insignificant case study of that secularization, which is not simply an absence, but an act of positive violence, a distortion of what our Lebenswelt, the cultural environment we inhabit, is really like.