Final thoughts on McLennan and safeguarding... 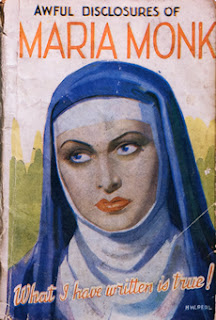 Having posted twice in quick succession on the McLennan report, I think I will now give it a rest and give us all some time to think over precisely what this all means for the Church in Scotland.

As a set of final remarks, let me throw in the following:

a) Too much of the commentary about 'safeguarding' in the Catholic Church is grandstanding. The aim must be to deal precisely with the problems in each specific area. For example, the conditions in Scotland are simply not the same as the conditions in Ireland. Only by looking specifically at what went wrong in Scotland do we have a chance of getting it right.

b) All of us need to be careful about hijacking fairly straightforward cases of human wickedness and suffering for the sake of an agenda. A particularly poor example of this is here. Stopping someone from promoting non-Catholic positions under the banner of Catholicism is one thing; protecting criminals is another.

c) There has been much talk in Catholic circles of the Benedict option. To the extent that this means the Church separating itself from wider society, this would seem to make responses to safeguarding children such as the McLennan report less possible. I have made clear in the past that I'm highly suspicious of the Benedict option as a global solution. The issue of the protection of the vulnerable is something of a test case. Despite what I've posted critically about the report, on the whole I welcome it and the element of outside scrutiny it brings. Part of the reason for this is precisely what opponents of the Church would deny: child abuse and abuse of power is not simply a Catholic matter and all of us can therefore learn from each other on what has gone wrong and what to do about it. But to do that properly means Catholics being both willing to listen to outside and internal criticism and also to engage with it critically. There is a difficult path to tread between defensive rejection of all criticism and credulous acceptance of all criticism: both extremes are examples of failing to exercise due care and attention to the genuine problems at stake.

The difficulty with (eg) criticisms such as Catherine Deveney's is that at times she is right. I don't think the case of Cardinal O'Brien has been dealt with well: more transparency would have been good here as I've previously argued. I suspect that Archbishop Scicluna should probably have spoken to her. But there is no future in which an international body of 1 billion people will be able to guarantee that every phone call from every journalist will be answered or every employment dispute resolved to the satisfaction of every party. The inability of UK politics -a comparatively straightforward world in comparison- to deal satisfactorily with similar but simpler circumstances has been evidenced by Harvey Proctor's case.

There is a rich tradition of finding sexual scandal in the Catholic Church. Some of it is simply false. Some of it is true. The people who really have a stake in this are those parents whose children might be affected in the future. When I converted to Catholicism and brought my children into the Church, I did so with the whispers of those relatives who viewed the Church as a paedophile ring buzzing in my ears. Nor to be frank did I dismiss those worries: I didn't have much of a sense of how to negotiate the institution and I'm fairly cynical about human behaviour. But having thought about it as carefully as I could, I didn't draw a line between Catholic 'occasions' and secular ones, precisely because I thought it was dangerous to do so. (Most of the situations in which I suspected my children would be at risk from secret abuse by adults had nothing to do with priests or religious and it would have been imprudent to give them a false sense of security in non-Catholic occasions.) Others must make their own judgments. But if you think (for example) that your children would be safer in a non-Catholic boarding school rather than a Catholic one, I think you're a fool. And I think you'd also be foolish to think that the danger of a cover up would be any less in a non-Catholic institution than a Catholic one.  That doesn't exculpate those Catholics who have either committed the abuse or covered it up. But it is precisely because it is a widespread problem across society that the Church needs to open itself up to engage critically with those who might have something to teach it.