Social conservatism and defending the nation 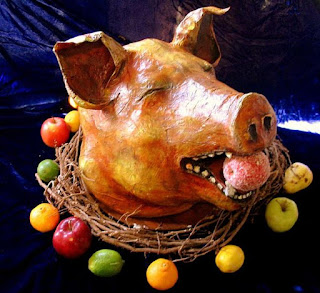 I've been immersed in reading about the trials and tribulations of twentieth century American conservatism recently (William Buckley Jnr, L.Brent Bozell, Russell Kirk etc). Mere curiosity aside, such a focus can, I think be defended on two grounds. First, there is something broader about the American conservative landscape that has allowed a greater variety and depth of views to be developed and defended, certainly when compared to the UK, let alone Scotland. Secondly, as a result of globalization etc, the American political landscape is, especially for Anglophones, our political landscape. (As an added bonus for Catholics, many of the major figures were Catholic.)

George H. Nash's The Conservative Intellectual Movement in America Since 1945 spends much of its time (in broad terms) considering the split between traditionalists and neo-cons (although he doesn't use those terms). A particularly dramatic moment which to an extent symbolizes the theoretical differences here is Willmoore Kendall's claim that a society has to be both closed to certain ideas and willing to defend itself against them by determined action:

Kendall acknowledged that 'liquidation [in this context, the deportation of Communists] of a minority' must be a very careful undertaking. But he insisted on two principles:

...a) that a democratic society that has a meaning to preserve, as I think that ours still does, must stand prepared to make such decisions, and b) that the surest way for it to lose its meaning is for it to tell itself, and its potential dissidents, that where dissidence is concerned, the sky's the limit.

(from The Conservative Intellectual Movement in America Since 1945)

Putting aside the rather chilling 'liquidation', the fundamental point that all societies are closed to certain values is undoubtedly true. (To what extent that exclusion is permanent and how it is to be enacted are further matters.) But what (for the UK) is the content of those defended values? And so we are back again to the question of British values and how they are to be realized particularly in the school system.

Sticking to a broadly Conservative party and similar (eg UKIP) position, we seem to be stuck in traditionalist/Kendallian majoritarian space. Kendall 'rejected as inherently undemocratic any effort to limit majorities by bills of rights' (ibid). In rough terms, whatever current British culture holds to be right are British values. And so we are delivered a rather unstable soup of defending the British Empire, supporting the post-Reformation settlement, the Monarchy, Unionism and welcoming the post 1960s sexual experiment. To articulate it is at once to risk revealing its inconsistency and even incoherence.

On the other hand, from a broadly neo-conservative position, there is absolutely no reason to suppose that what tradition has delivered to us in British politics is any good, and certainly, not entirely good. British history, the state we're in, like all other human endeavours, is shot through with human failings and the evils therefrom. What is right in the tradition (and a certain inherent scepticism should make any brand of conservative careful about rejecting too quickly what we have received) has to be tested, for example, by the principles of natural law and right. And we won't be suprised to find, at times, that this will show the tradition to be wanting.

And what then of the Catholic Scottish conservative? Firstly, for any Catholic in the West, I think conservative in broad terms has to be the right label. For roughly 1500 years, the culture has been at least in intention Christian. Even though much evil has been done under that description, the system of culture aimed at there is one that has to be conserved against a culture that is often avowedly anti-Christian. But it is a set of principles, a culture, which to an extent always exists on the intellectual and moral horizon: we have failed -and will fail- to live up to it. Secondly, for a British and certainly Scottish Catholic, the tradition we live in is avowedly not entirely ours. For 500 years, we have lived in State(s) that have been mostly anti-Catholic: whatever we might share with Protestantism, we have absolutely no reason to think that there is an unproblematic set of  traditional British values that, despite a conscious opposition to Catholicism, have oddly remained still entirely Catholic. Whether or not traditionalism in politics is ever a viable Catholic political position, it is certainly not one in Britain. To bring it back to Kendall, the natural position of a Catholic conservative in the UK is one where majoritarian rule is tempered by principle.

Where's all this going? I think towards an awareness of quite how barren a political landscape the social conservative of that ilk faces. Political traditionalism in the UK is saddled with 500 years of Protestantism and 50 years of Vile Bodies. Neo-conservatism faces the problem of the absence of a basket of principles that is likely to command sufficient loyalty for effective political action. If there is any hope, then (as in post war America) there has to be an intellectual revival of conservatism first, which then establishes the ground for an eventual political revival. And (to return to Scotland for the moment) I see little sign of that, certainly in the supporters of the Conservative party. There we see the adoption of a political allegiance to progessivism or to the principles of the unrestrained free market. The main policy on which they agree is Unionism which, as I've argued, can hardly be regarded as essential to a principled neo-conservative case. No one is arguing the case for government (and indeed commerce) limited for the purpose of allowing the natural unit of the family and the little platoons of civil society to flourish.

This is, of course, the natural feeding ground of Red Toryism or Blue Labour. But both have limited traction in Scotland, their very names being here rather political insults. (And given current political realities, we really need a sort of Blue/Red (purple?) Nationalism.) I think we probably need a Scottish William Buckley Jnr and a National Review, an intellectual force that is genuinely intellectual but immersed in political realities and punchily dynamic. Any volunteers?