Catholicism as a hospital 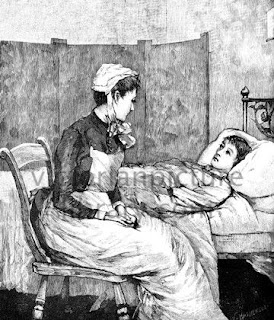 Say, per impossibile, at some stage in the near future, the ordained Church just became a hospital for the spiritually sick, in much the way that liberal Anglicans seem to interpret this. So basically we spend our time making the sad feel better and encouraging people not to feel badly about themselves or their lives.

What are the laity meant to do? It's perhaps straightforward for those in the 'caring' professions such as medicine: they go on patching things up and perhaps just do it with more intensity. But what of the many other Catholics whose jobs don't (directly) fit this caring pattern? What about judges and politicans and novelists and accountants? How do they simply become spiritual nurses?

Oddly enough, although Vatican II reemphasized that we are all Church, laity and ordained, the idea that the Church should become a hospital only makes sense if we understand 'Church' here as simply the ordained and members of religious orders, or if we understand the Church as only a tiny and marginal part of society. To be a hospital depends on there being an everyday life going on elsewhere, from which the sick emerge for treatment, and to which the restored return. That 'everyday' can either be the laity or the non-Catholic world.

Certainly, a lot of Protestant Churches do seem to think of the world like this: Church is a matter of patching up the evils of the world and hence not being part of that world. (The Erastian element of Anglicanism fits in very well with this picture: the State does the important stuff and the Church mops it up.) But the history and theology of Catholicism suggests otherwise: it has always been an important part of Catholicism (even if not always the (ordained) Church) to make our earthly life as good as possible: to the extent that the State is secular, it is a Catholic secularism which takes its Christian belief just as seriously as the Church.

If, as some seem to interpret it, making the Church a hospital for sinners means simply a day to day nursing, without judgment, without planning, then the only reasonable interpretation is that the laity have to do the necessary rest. So while 'the Church' patches things up, lay Catholics try to apply their Catholicsm to making the State, the family and businesses etc, as Catholic as possible. And just as it would be absurd to be a judge without judgment, a teacher without assessment or a police officer without a desire to enforce justice with violence if necessary, it would be absurd for a Catholic judge, teacher or police officer simply to 'care', at least in the manner of a nurse.

One of the strongest elements of Catholicism is its universality: it encompasses 'worlds and volumes of worlds'. So if, per impossibile, the 'Church' becomes simply a space for nurselike care, the Catholic laity, excluded from being the Church, will have to do the heavy lifting on the rest of the everyday life, making sure that as few as possible have to enter the hospital and as many as possible find a way to emerge from it. And it will have to do it without any help from bishops and priests because they will be entirely focused on 'caring' of a highly specialized sort...

So much for the thought experiment. I'm not suggesting that the Holy Father's remarks or general approach can't be understood in a perfectly orthodox way, primarily as a hyperbolic correction to a heartless understanding of Catholicism. But equally, I've come across enough people who think that, if we all acted like nursery school teachers, Catholicism would be better to suspect that the other side of the truth also needs to be stated. And that is that unless we think Catholicism is solely a religion for the ordained, religious orders and those who can closely imitate them, then we cannot all act like nurses. I suspect that what's often going on here is a sort of clericism (only priests and priestlike roles matter) or a sort of delegated secularity ('I don't believe in all that rubbish, but it's quite good for society that there are some people who do'). In neither case is this the Catholicism which embraces the full range of (good) human personality and roles.

Let's be concrete. If at any stage, the 'Church's' attitude to marriage was simply and immediately comforting those wounded by the idiocies of society's attitude to sex, then there would be a need for lay Catholics to do the judging and the compelling. Members of the family would have to tell straying husbands they are fools and to go crawling back to their wives. Friends would have to cut dead the adulterous betrayers of their other friends. Parents would have to bring up their children never, ever, to treat their spouses in the way they have seen others treat their spouses. Police would chase down those who refuse to pay for the abandoned children. Judges would have to allocate a just share of property. But the 'Church' would distance itself from all this messy highly judgmental stuff. Which rather seems to leave lay Catholics pursuing the good as 'outside' the Church.

I'm sure it all makes sense somehow.