The legitimacy of rebellion 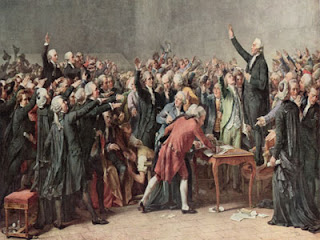 This is going to be one of those blogposts where the primary aim is for me to summarise some incomplete thoughts/research rather than to attempt a complete solution. (If I've misrepresented anyone else's views at any stage, my apologies, and do correct me in the combox. I find Twitter particularly frustrating for bringing out detail and nuances and I've quite likely misunderstood a lot of these.)

As a result of Ttony's post on the 1916 Proclamation of the Irish Government (here for the text of the proclamation) I got into a discussion with Cathy Barry (on @IrishPhilosophy -follow!!) on the understanding of rebellion in the proclamation and, more widely, in just war/Thomist theory. To start at the end, I suggested the following eirenical formula:

Need longer treatment to deal with all this! But might we agree that mediaeval political theory at least reluctant to concede right of rebellion/revolution to groups/individuals without legitimate authority? And that brings us back to 1916 and rhetorical/real search for such authority

Now Cathy wasn't prepared to concede this -on the grounds that 'they didn't say that' (I'll return to this) - coupled with a reasonableness test from the following scenario:

Imagine North Koreans with plan to revolt likely to succeed. How could they get authority?

Just to dispose of the latter point quickly, North Koreans (admittedly with a mediaeval Christian outlook on these things!) might seek authority from the papacy (as a universal authority) or from the bodies with authority within the land (eg barons). This is very much the scenario of the Declaration of Arbroath where, having emphasised the independent rights of the Scottish King (as against the English claim of his holding this kingship from the English monarchy) it then goes on to emphasise the rights of the Barones et Liberetenenetes ac tota Communitas Regni Scocie [barons and freemen and the whole commuity of the kingdom of Scotland] to depose a king who acts against their  leges et Consuetudines [laws and customs]. This is a communitas with internal sources of authority from within the state appealing to a source of authority above the state. Unsurprisingly, the Declaration is very mediaeval in this way: it does not simply appeal to the better condition of the Scottish people if they are ruled from Scotland, but to questions of legitimate authority to wage war and govern. It envisages not the modern emphasis on just the state and the invididual, but envisages other corporate sources of power and authority. [If I were developing this point, I'd say something here about a general point of mediaeval hermeneutics: both on grounds of commonsense ideas of (feudal) hierarchy in the mediaeval world and on the grounds of the neo-Platonic influence in (eg) Aquinas, I'd expect such a concern with establishing authority from above -not with the idea that the individual has a right to act himself, but with the idea that authority is bestowed from above and only in certain circumstances where that (state) authority has broken down is it legitimate to look elsewhere.]

Now of course fast forwarding to 1916, we are no longer operating in an entirely mediaeval picture (even for Catholics). But modern Catholic teaching, however far it has moved from the mediaeval world, still maintains a concern for the natural authority of bodies other than the state. Moreover, it maintains a concern for civic peace and preservation of th established order that goes beyond the simple question of effectiveness (would (eg) people be happier under a new regime?) [I leave this paragraph as an assertion, but it is one that I think is easily evidenced from (eg) the Compendium of Social Doctrine.] So I would expect, however changed from the Declaration of Arbroath, a concern in a heavily Catholic influenced document with the legitimate authority for their actions. And I would argue that this is pretty self evident from the text:

In the name of God and of the dead generations from which she receives her old tradition of nationhood, Ireland, through us, summons her children to her flag and strikes for her freedom.

We declare the right of the people of Ireland to the ownership of Ireland and to the unfettered control of Irish destinies, to be sovereign and indefeasible. The long usurpation of that right by a foreign people and government has not extinguished the right, nor can it ever be extinguished except by the destruction of the Irish people. In every generation the Irish people have asserted their right to national freedom and sovereignty; six times during the past three hundred years they have asserted it in arms. Standing on that fundamental right and again asserting it in arms in the face of the world, we hereby proclaim the Irish Republic as a Sovereign Independent State, and we pledge our lives and the lives of our comrades in arms to the cause of its freedom, of its welfare, and of its exaltation among the nations.

Now, of course, to assert legtimacy is one thing, to prove it is another. But going back to my eirenic claim above, I would expect Catholics at least to be worried about establishing legitimate authority for rebellion and, mutatis mutandis, I think that concern is evident both in the Declaration of Arbroath and the Proclamation. [There is also the rather interesting attempt (successful?) to achieve support from the papacy for the Easter Rising (Plunkett and Benedict XV here).]

I turn now to consider Cathy's point about texts: 'they didn't say that'. In the context of our discussion, I take that to be a reference to Aquinas's Summa Theologiae, particularly STh IIa IIae qq40 & 42 (on war and on sedition) q40 here q42 here . More specifically, we discussed the legitimacy of applying 'Just War' theory to rebellion. (I think this cropped up as a result of Ttony's focus on this question in his blog and this may have cropped up from the book he was reviewing. In any case, the applicability of Just War theory here is not an unreasonable thought.)

Now I concede immediately that Just War theory, certainly as sketched in q40 is not directly applicable to rebellion. But then neither is the theory of sedition in q42: indeed Aquinas clearly excludes 'perturbatio' of tyranny (and presumably rebellion is a subset of perturbationes of this kind) from sedition.

Consequently there is no sedition in disturbing a government of this kind, unless indeed the tyrant's rule be disturbed so inordinately, that his subjects suffer greater harm from the consequent disturbance than from the tyrant's government.


That just perturbatio is subject to a test of proportionality does not mean that this is the only test: it is a necessary condition of just pertubatio not a sufficient one. (Or at least, there is no indication in the text that this is the only test: Aquinas doesn't say that.) Moreover, although he does say that war is about external strife rather than internal strife ( 'quia bellum proprie est contra extraneos et hostes' (SThIIa IIae q42 a1 resp) note the 'proprie'. Given the usual Aristotelian ideas of focal meaning or paradigms, that somethng may not be said proprie of a case does not mean that this case cannot be illuminated by the case proprie described. Here, I'd expect the case of Just War to illuminate the issue of rebellion, particularly if it is (as was claimed in 1916) a case of perturbatio 'contra extraneos' ('The long usurpation of that right by a foreign people...') Aquinas certainly does seem to say this.

Moreover, there is a danger of reading Aquinas' Summa as a legal code. For example, let's accept for the sake of argument that q40 does not deal with rebellion. And let's also accept that rebellion is covered in q42 where it is subject only to the test of effectiveness. If this were a legal code, one might point to the clear text and exclude any other considerations. (That's debatable, but it is at least arguable.) But the Summa is a theological primer for students: it is no intended to cover every eventuality and nor does it. Now it is pretty obvious that Aquinas has nothing like a developed theory of rebellion: he is not trying for one and he certainly hasn't achieved it here. It is therefore reasonable to look to Aquinas' general approach in related areas to see how they might flesh out ad mentem divi Thomae the little he does say about rebellion. And it is reasonable in such circumstances to look to q40 on Just War.

To summarise. I conclude that a concern for the establishment of a legitimate authority to rebel is present in the 1916 Proclamation. Primarily, that is a matter of the text itself, but the general trend of Catholic teaching on this seems to make this a reasonable interpretation.

Secondly, I conclude that mediaeval political theory [is] at least reluctant to concede right of rebellion/revolution to groups/individuals without legitimate authority. In the comparative luxury of a blogpost over the 140 characters of Twitter, I'd concede that 'mediaeval political theory' is too wide, and would have to include (if taken literally) everything from Ango-Saxon theories of kingship to Marsilus of Padua and more. But in the context of the present discussion, if it means 'what formed the germ of Catholic political theory particularly in Aquinas', then I'd stand by the claim. This is for two reasons. First (and this is unevidenced but I take it to be intuitively plausible) there is that general hermeneutical point from above that a concern for levels of authority above the individual is what you'd expect (mostly) to find in the Middle Ages. Secondly, so far as the texts of the Declaration of Arbroath and the Proclamation are themselves evidence of what is thrown up by this tradition, both do in fact display such a concern. Thirdly, insofar as the texts of q40 and q42 in tbe Summa are concerned, nothing is said to contradict such an interpretation and much is said to support it.

[And now to acknowledge the lacunae that I'd like to pursue but don't have the time just now!

2) I haven't taken detailed account of other texts where Aquinas deals with this issue. (They're listed on the first page preview  of the above. I've had a quick look at them insofar as they're available online (all are apparently available at least in Latin) but won't claim to have done much with them. The above paper seems to suggest a development in his views.]

3) Suarez would be an obvious next step (esp Defensio catholicae fidei contra anglicanae sectae errores ). There are some English translations of at least part of this online but again I haven't pursued in any detail.]