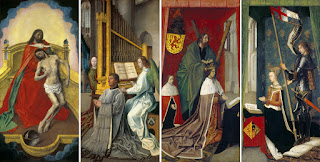 First reading
II Maccabees 7: 1-2, 9-14
It came tae pass also, that seven brethren, together wi their mother, were apprehended, an compellit bi the king tae eat swine's flesh against the law, for which end they were tormentit wi whips an scourges. But ane o thaim, wha wis the eldest, says thus: "Whit wouldst thou speir, or learn o us? We are ready tae dee rather than tae transgress the laws o God, receivit from our fathers."
An whan he wis at the last gasp, the second brother says thus: "Thou indeed, o most wickit man, destroyest us oot o this present life: but the king o the world will raise us up, wha dee for his laws, i the resurrection o eternal life."
After him the third wis made a mockin stock, an whan he wis required, he quickly put forth his tongue, an courageously stretchit oot his hands, an says wi confidence: "These A have from heaven, but for the laws o God A now despise thaim: because A hope tae receive thaim again from him." Sae that the king, an they that were wi him, wonderit at the young man's courage, because he esteemit the torments as nothin. An after he wis thus dead, they tormentit the fourth i the like manner. An whan he wis now ready tae dee, he spoke thus: "It is better, bein put tae death bi men, tae leuk for hope from God, tae be raisit up again bi him: for, as tae thee thou shalt have nae resurrection unto life."
[Own translation, level 1 (28/6/22). For methodology see here.]

And thar cam to him a wheen o’ the Sadducees, wha say thar is nae Risin-again; and they speir’t at him, sayin, “Master! Moses pat doon for us: Gin aiblins a man’s brither soud dee, haein a wife, and he be bairn-less, that his brither, soud tak the wife, and raise up seed to his brither. Noo, thar war seeven brithers; and the first, takin a wife, dee’t bairn-less. And the second; and he dee’t bairnless. And the third had her; and, i’ the same way the seeven -they left nae bairn, and dee’t. And eftir, the wumman too dee’t. And sae, i’ the Risin again, whase wife o’ them sal she be? For the seven had her a wife.”

And Jesus said to them, “The bairns o’ this warld mairry, and are gien in mairriage; but they that are coontit wordie that warld to obteen, and the Risin-again frae the deid, naither mairry nor are gien in mairriage. Naither can they dee ony mair; for they are as the Angels; and are sons o’ God, bein sons o’ the Risin-again. But, that the deid are to be rais’t, e’en Moses schaws at The Buss, whan he ca’s Jehova[h], ‘The God o’ Abra’m, the God o’ Isaac, and the God o’ Jaucob.’ Noo, he isna the God o’ deid men, but o’ leevin; for to him are a' to leeve!”