Get us to the Greek (philosophy) 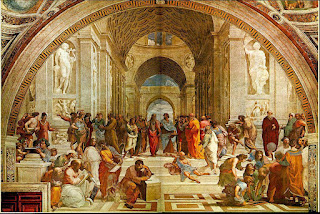 Philosopher dudes hanging in the hood....

Last time as you recall, I left the post on Natural Law with the suggestion, that when addressing 'Natural Law as aspiration' -ie the project of thinking through ethics philosophically rather than the 'achieved Natural Law' which is the body of the Church's conclusions having done this for two thousand years- it would be good to agree on Graeco-Roman philosophy as a starting point rather than having to start from scratch. I made a couple of informal points intended to support that conclusion, but I'll now turn to a more rigorous argument.

Elizabeth Anscombe's paper, Modern Moral Philosophy, has become something of a classic in modern philosophical ethics, particularly amongst those committed to the approach of virtue ethics. In essence, it argues that the two main theories of ethics current in English speaking philosophy -the ethics of duty derived from Kant and the consequentialist theory of utilitarianism- are both based on fundamentally false understandings and should be rejected. Her arguments against utilitarianism are broadly the well known ways in which it fails to take account of our fundamental understandings of what being good involves: as she says, it is a 'shallow philosophy'.

Her point against duty ethics or deontology is rather simpler:

To have a law conception of ethics is to hold that what is needed for conformity with the virtues failure in which is the mark of being bad qua man (and not merely, say, qua craftsman or logician)--that what is needed for this, is required by divine law. Naturally it is not possible to have such a conception unless you believe in God as a law‑giver; like Jews, Stoics, and Christians. But if such a conception is dominant for many centuries, and then is given up, it is a natural result that the concepts of "obligation,” of being bound or required as by a law, should remain though they had lost their root; and if the word "ought" has become invested in certain contexts with the sense of "obligation," it too will remain to be spoken with a special emphasis and special feeling in these contexts.


Essentially, once you dump God, you have to abandon the idea of a moral law: in the absence of a legislator, there is no moral law. Now this isn't the same as the claim that, once you've dumped God, anything goes: it is the much more local point that, once you don't have a legislator, such restrictions as are imposed on human behaviour can't be couched in terms of moral laws: there has to be another basis. To put this another way, once you reject God, you have rejected the moral ought but you have not rejected the ethical good. You can still talk about what it's good or bad for people to do, in the same way that you can talk about how it's good or bad to look after a car in a certain way (because it won't work if you do), but you can't then take the next step (as theists do) and claim that, because it is bad for human beings to act in certain ways, they morally ought not to. (Again, taking the motoring comparison, I currently have two reasons not to drive at 100mph in a thirty mile zone: a) it's illegal; b) it's going to harm me and others. Dumping God gets rid of the moral version of a) but not b).)

Now this suggests that a lot of current moral debate (which is often phrased in terms of deontology: rights, justice, equal application of rules) should be phrased (from a non-theist point of view) in terms of what benefits or harms human beings: in terms of human flourishing. And the last time that this was done without an admixture of divine legislation in the West was before Christianity -ie in Ancient Greece and Rome. So, from a non-theist point of view, turning back to (particularly) Greek philosophy is a good idea because it enables us to see what ethics is like before the introduction of the Sky Fairy legislator.

From a Catholic point of view, although dropping God is clearly not to be recommended, it is a lot better than  starting completely from scratch. (Moreover, the suspicion is always that 'starting from scratch' is just starting from a modern ethical mess that results from jettisoning God without really thinking through the consequences of this for ethics: much better to go back to the last coherent understanding of ethics that is shared by Christianity and non-theists and work from there.) Very, very crudely, much Catholic natural law thinking is Aristotle and Plato plus: they work out what is good for human beings; we add God's imprimatur as divine legislator who wants what is good for human beings.

So this is why we should get ourselves back to the Greek. By focusing on the understandings and debates about human flourishing that existed before the idea of a personal legislator was introduced by Christianity, Catholics and non-theists can find a common language for ethical reflection: one that is deeper than utilitarianism, one that is not in hock to a misapplied theological language as is deontology, and one that doesn't shut down discussions too early. Precisely what this language amounts to will itself of course be a matter for debate. But, as a matter of fact, the philosophical movement which emerged from Anscombe's paper is that of virtue ethics which can be characterized as follows:

Most virtue ethics theories take their inspiration from Aristotle who declared that a virtuous person is someone who has ideal character traits. These traits derive from natural internal tendencies, but need to be nurtured; however, once established, they will become stable. For example, a virtuous person is someone who is kind across many situations over a lifetime because that is her character and not because she wants to maximize utility or gain favors or simply do her duty. Unlike deontological and consequentialist theories, theories of virtue ethics do not aim primarily to identify universal principles that can be applied in any moral situation. And virtue ethics theories deal with wider questions—“How should I live?” and “What is the good life?” and “What are proper family and social values?”

No misunderstandings here! I'm not arguing that, for a Catholic, we should rethink the achieved Natural Law in the teachings of the Church and replace it by virtue ethics: this would be rather like reinventing the wheel. But in speaking to those who do not accept the divine authority of the Church, we need to find a common language in which we can, brick by brick, inch by inch, try to argue them towards the Catholic position, at least so far as getting them to see it isn't simply a version of divine command theory, where we believe and do certain things just because we are told to, but is rather a coherent, well thought through ethical system based on a rich understanding of human nature and what is good for it. Moreover, in a time where many nominal Catholics seem to have lost confidence in the rationality of Catholic beliefs particularly in the area of sexual morality, arguing for those beliefs in a philosophical language that is not committed to theism may well provide a needed reminder that, contrary to popular belief, the Beatles did not refute Aquinas.