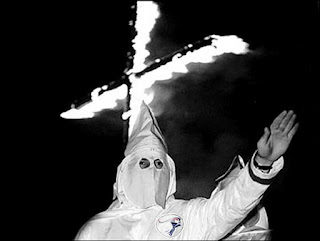 Trying not to be overcome by the clouds of smug emerging from some quarters, how did we bead rattling Catholic bigots actually spend National Marriage Sunday?

Well, this is what happened in my Parish Church. The letter from the Catholic Bishops was read out. (The text on the Scottish Media Office site, though the one actually read in my Church, clearly isn't the one that Tom French of the Equality Network et al. have seen, as it contains absolutely no encouragement of bigotry towards homosexuals, but only a defence of the institution of marriage as traditionally understood.) The Parish Priest then gave a brief commentary on the letter.

So what did he say? An encouragement in future to read what the Bishops have actually said on the subject rather than accept the headlines of news reports. (Again, this was clearly a mishearing on my part as it smacks of encouraging Catholics to think for themselves.) A clear statement that everyone, including homosexuals, is welcome in the Church. A reminder that we are a Church of sinners, all of us struggling in various ways to follow the difficult teachings of Christ. And a rather striking reminder that, only a few years ago, what is now being described as the foulest form of bigotry (ie thinking that marriage should be about the lifetime commitment of one man to one woman) would have been the merest commonsense. And then on with the normal Mass.

Anyway, I clearly misunderstood what was said or have gone to a very atypical Church. I'd be delighted to hear more representative accounts of dancing round a fiery cross whilst chanting Lady Gaga songs in Latin backwards...