The Authorized Version and the Spirit of Vatican II 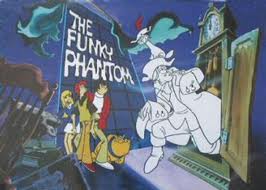 The Spirit of Vatican II, even. At your service... *

The good people at The Anglo-Catholic (which is the main online worldwide forum for Ordinariate reflection) have been mulling over the issue which I raised before: the place of the King James Bible in the Ordinariates.

Putting aside for the moment the specific issue of the KJV, the whole area seems to me to be one where modern Catholicism has shown itself to be frightened of two important virtues: a love of beauty, and that sense of respect for the past and ancestral inheritance that forms part of the Roman virtue of pietas.

As many Scots, we used to live in a Victorian flat which had been 'done over' sometime in the seventies. 'Doing over' in this case meant ripping out cornice work, covering up mouldings on doors, blocking up fire places etc. In general, this sort of seventies' aesthetic was motivated by two considerations: a desire for efficiency (cut down on the dust traps and make everything wipe clean) and a desire for modernity (achieving a way of life that symbolized progress). Now, at the same time as the previous owners of our flat were engaged in their redecoration, the Spirit of Vatican II  was sweeping through both the liturgy and Church architecture. Out went all the clutter. In came efficiency and a material reflection of the search for modernity. As one author puts it:

[in] the movement for liturgical renewal since Vatican II [...] the practices surrounding Christian symbols were rationalized, individualized and became more austere.

Now, I certainly don't think that, in themselves, rationalization and austerity are necessarily bad things. There is something to be said for decluttering and simplicity. There is even something to be said for 'modernity'. But where we go wrong is in thinking that these are the only values: that anything which is baroque or complicated, anything that is organic and old, all this must be swept away. There is a particular temptation to this in Christianity as a result of the First Commandment (that's the Second to  most Protestants and Eastern Orthodox) prohibiting material representations of God: material things get in the way of God and we need to clear them out. Well, again, that's sometimes true. Anyone who has been around some Anglo-Catholics will be aware how the material complexities of religion seem at times to become the main focus: we can get obsessed with minutiae of ritual and church architecture and forget about God. In the end, there is no substitute for prudentia: the practical wisdom of the wise person who gets the balance between competing goods right.

In the Catholic tradition, beauty is an aspect of God, not a distraction from him. If the King James Version is an example of beautiful English prose -and it surely is- then it should be seized and used by the Church. Moreover, that love for the past, that pietas which expresses the human need for faithfulness to past generations and to the depth of value in that faithfulness is again not something to be rejected. If King James Version is an example of an historical document that is at the heart of much Anglophone literary culture -and again it's hard to see that it isn't- then once more let the Church seize it and use it.

The only arguments against such a conclusion seem to me to be these:

a) That the KJV is tainted by Protestantism. This seems to fall into two aspects: i) that the text itself puts a Protestant spin on the original; ii) that it has become 'associated' with heresy. On i), I've struggled to find much more Protestantism here than you'd find in (say) the Revised Standard Version. For Catholics, we always need to read the Bible in the light of the Church's interpretation -and that means a constant awareness of the shortcomings of any particular translation and of the need for the teaching authority of the Church. On ii), if this is the case, then Anglicanism as a whole has become thus tainted and we shouldn't have an Ordinariate. Since the Church -rightly- has taken the decision that there is good within the Anglican tradition which needs to be reclaimed for the Body Catholic, I see no reason why this shouldn't apply to that aspect of the Anglican tradition which is the KJV.

b) That liturgical use of Scripture needs to be in comprehensible language. There is clearly something in this point. But the KJV is perfectly comprehensible, if not as easily comprehensible as (say) the Good News Bible. There is a trade off here been immediate comprehensibility and the need to have a version one can live with for one's entire life and take forward into future generations: drench children in the KJV and they will gradually understand it and be able to drench the following generation in its language. Anyone think this is likely to be done with any other modern English version?

Beauty and respect for the forms of the past are goods. They are not the only goods, but they are important ones and have a place in Christian culture. On these grounds, the King James Version needs an honoured place within the Church -and that means within the Ordinariate.

[*For those too young for this reference: here.]