King James Version and the Ordinariate 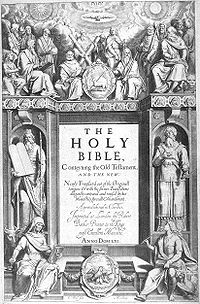 The Ordinariate (the body existing within the Catholic Church which retains elements of Anglican liturgical uses and generally serves as an attempt to bring Anglican traditions into full Communion with the Church) is introducing its Customary (a sort of truncated Book of Common Prayer) shortly (see news item 1 June here).

Excellent -and mine's already on order! But I do worry about the apparent use of the Revised Standard Version translation of the Bible in the Customary rather than the King James Version. At least, I take it from the following (link as above) that the daily readings of scripture will be from the RSV rather than the KJV:

Thus, whenever the Customary quotes extensively from the Bible, it is the RSV that it uses.


Certainly, it is the RSV rather than the KJV that is authorized for use by the Vatican:


The Congregation for Divine Worship and the Discipline of the Sacraments has published a Decree permitting the use of the Revised Standard Version(Second Catholic Edition) for liturgical use in the Personal Ordinariate of Our Lady of Walsingham.

This edition of the Holy Bible allows those Catholics originally from the Anglican tradition, to worship using a version of scripture which is familiar to them. It also promotes the English Bible tradition and recent efforts to renew Catholic liturgy with more accurate translations.


Now, in many ways, I can quite understand this decision. Anyone attending Anglican services such as Evensong will recognize that whilst the liturgy may be in the Tudor English of the Book of Common Prayer, the Bible readings are usually from the RSV. So inasmuch as the Ordinariate exists to Catholicize present day Anglicanism, it makes sense to reproduce this pattern. Moreover, there is no doubt that the RSV is a more accurate translation than the KJV. So, on grounds of accuracy and current use, going for the RSV seems to make sense. But...

One of the things that fascinates me about the Ordinariate is its historical and cultural importance. There is something quite striking about the fact that there now exists within the Roman Catholic Church a body that has emerged from the Reformation and now returned. And given the way that the English Reformation created that cultural juggernaut that is the English language and English literature, the embracing of the sources of that juggernaut in the Book of Common Prayer and the King James Bible would be of huge symbolic importance.

Quite apart from the symbolism involved, there is something utterly seductive in the language of the KJV. I feel it which is why, normally, I use the Daily Office from the Book of Hours website which uses the Office from the Book of Divine Worship (an existing Catholic version of the Book of Common Prayer) with readings from the KJV. Others feel it including Richard Dawkins. This sense of the beauty of language and of the importance of that beauty in liturgy is surely very much in line with Benedict's understanding of the Church. I certainly wouldn't argue that the KJV should be the only version available for use in the Ordinariate, but to miss the chance to bring it into the Catholic fold and, in essence, to rebaptize it as fully part of our Catholic heritage strikes me as a lost opportunity.

I'm not involved in any way with the thinking behind the scenes in the Ordinariate, so I don't know to what extent any thought has been given to the place of the KJV in its life. Reading the article by Monsignor Burnham in June's Portal (the magazine of the Ordinariate), I suspect that there has been some discussion which explains the (to my mind, rather defensive) following:

Why the RSV and not the King James Bible? The answer lies in the subtle development of the English Bible tradition. For accuracy’s sake, twentieth century students began to rely on the Revised Version of 1881-1894. Meanwhile the Revised Standard Version of 1946-1957 was becoming established and, in 1966, was accepted by Catholics and Protestants as a ‘Common Bible’. It was the first truly ecumenical Bible and brought together the two traditions – the Catholic Douay-Rheims Bible and the Protestant Authorised Version. Thus, whenever the Customary quotes extensively from the Bible, it is the RSV that it uses. The Catholic Church in the 1970s in Britain opted (mistakenly as it now seems) for the ‘dynamic equivalent’ Jerusalem Bible translation. That version greatly helped public understanding of the Scriptures, but, like the Mass translation of the same period, was based on a theory of translation that is of great value in paraphrasing and communicating the meaning of, for example, modern literature written in other languages, but no longer thought appropriate for representing sacred texts written in ancient languages.

Although this does explain why not the Jerusalem Bible (and I quite agree with this decision), it doesn't really explain why not the KJV. Reading the Anglo-Catholic website on this issue of language, there's clearly a desire among other former Anglicans for a Catholic reception of the KJV.

So, come on! Let's grab back the King James Bible and get King Jamie burling in his grave...

As a point of comparison, 1 Corinthians:

1 Though I speak with the tongues of men and of angels, and have not charity, I am become as sounding brass, or a tinkling cymbal. 2 And though I have the gift of prophecy, and understand all mysteries, and all knowledge; and though I have all faith, so that I could remove mountains, and have not charity, I am nothing. 3 And though I bestow all my goods to feed the poor, and though I give my body to be burned, and have not charity, it profiteth me nothing.4 Charity suffereth long, and is kind; charity envieth not; charity vaunteth not itself, is not puffed up, 5 Doth not behave itself unseemly, seeketh not her own, is not easily provoked, thinketh no evil; 6 Rejoiceth not in iniquity, but rejoiceth in the truth; 7 Beareth all things, believeth all things, hopeth all things, endureth all things. 8 Charity never faileth: but whether there be prophecies, they shall fail; whether there be tongues, they shall cease; whether there be knowledge, it shall vanish away. 9 For we know in part, and we prophesy in part. 10 But when that which is perfect is come, then that which is in part shall be done away. 11 When I was a child, I spake as a child, I understood as a child, I thought as a child: but when I became a man, I put away childish things. 12 For now we see through a glass, darkly; but then face to face: now I know in part; but then shall I know even as also I am known. 13 And now abideth faith, hope, charity, these three; but the greatest of these is charity.
Revised Standard Version:

If I speak in the tongues of men and of angels, but have not love, I am a noisy gong or a clanging cymbal.   2 And if I have prophetic powers, and understand all mysteries and all knowledge, and if I have all faith, so as to remove mountains, but have not love, I am nothing.   3 If I give away all I have, and if I deliver my body to be burned, but have not love, I gain nothing.   4 Love is patient and kind; love is not jealous or boastful;   5 it is not arrogant or rude. Love does not insist on its own way; it is not irritable or resentful;   6 it does not rejoice at wrong, but rejoices in the right.   7 Love bears all things, believes all things, hopes all things, endures all things.   8 Love never ends; as for prophecies, they will pass away; as for tongues, they will cease; as for knowledge, it will pass away.   9 For our knowledge is imperfect and our prophecy is imperfect;   10 but when the perfect comes, the imperfect will pass away.   11 When I was a child, I spoke like a child, I thought like a child, I reasoned like a child; when I became a man, I gave up childish ways.   12 For now we see in a mirror dimly, but then face to face. Now I know in part; then I shall understand fully, even as I have been fully understood.   13 So faith, hope, love abide, these three; but the greatest of these is love.