Why I am an atheist 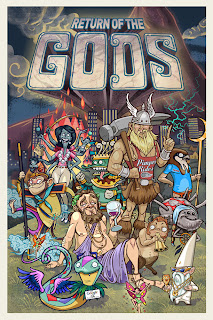 Don't believe in any of these...


I waste far too much time engaging in futile internet tit for tat exchanges (Catholic Herald comboxes being particularly the target just now of the 'right thinking people' as they kindly share their wit and wisdom with us benighted paedo-priest-worshipping-know-nothings).

For every theist is also an atheist. That is, every believer in one god is a disbeliever in another. Believers in the Christian God disbelieve in the vengeful, jealous and capricious God of the Old Testament, as well as in the Hindu gods or the Greek gods or the nature gods of "primitive" tribes or any number of other "false gods." People believe in the reality of their own God, but they are not similarly credulous when it comes to other people's gods; here their disbelief is patent and powerful. They do not preach agnosticism about those other gods; they reject them outright. I am with them on this point, but I extend it to their God too. My point is that they are as "dogmatic" as I am in their atheism; we are just atheists about different gods. I am an atheist about all gods; typical theists are atheists about the majority of gods believed in over the centuries by human beings of one tribe or another. I find their disbelief thoroughly sensible; I would merely urge them to push it one stage further. I favor total atheism; they favor selective atheism, none of that pusillanimous agnosticism for either of us (Why I am an atheist. pp8-7).


To put this more simply, when I disbelieve in gods such as Thor, Zeus and Richard Dawkins, I am disbelieving in one kind of entity. When I believe in the God of Catholicism, I believe in another kind of entity. My disbelief in gods has no more implications for my belief in God, than my disbelief in all sorts of other things (unicorns, the Easter bunny, the Loch Ness monster). Just as it would be absurd to argue that, just because I disbelieved in unicorns, I shouldn't believe in the existence of triangles, so it is absurd to argue that, just because I don't believe in Thor, I shouldn't believe in God: God is a different kind of thing from gods.

Now the atheist at this point will no doubt start suggesting that there is a rather closer analogy between the God of Catholicism and Thor than there is between a triangle and a unicorn. The charge would no doubt go something like this:

It's here that proofs in Natural theology play an absolutely key role: whether or not they prove the existence of God, they define the existence of God. Thus, from Aquinas's Five Ways, I learn that God is a necessary being, an absolutely good being and an intelligent being. (And so on.) So if Thor is not perfectly good, not capable of always doing what he wants etc, then he is not God but something else. Metaphorically, God is a triangle, Thor is a unicorn: what is relevant to disproving Thor is not relevant to disproving God.

At this point, many atheists will say something like this:

Look, we know that Catholicism is based on the Bible. In the Old Testament, Jehovah is pretty much the same sort of angry sky god that Thor is. So really, putting aside all this convenient theological twaddle, Catholics are just basing their beliefs on the same sort of stuff the Vikings did. You might dress it up in philosophy, but really it's just storybook sky god stuff all over again.


Well, no. It really can't be said too many times: Catholics do not base on their understanding of God and religion just on the Bible. The First Vatican Council decrees:

The importance of Natural Theology -the proof of the existence of God by the 'natural light of human reason'- is thus enshrined within the religion. So we believe in a God who possesses the qualities suggested in arguments such as Aquinas's, not in a god who carries a hammer and smites ice giants.

But, says the atheist, how then do you move from the God of reason to the God (or perhaps we might even say 'god') of the Bible, in particular, that of the Old Testament? (After all, you do believe they are one and the same, don't you, and he does look like the sort of chap who would smite ice giants given half the chance.)

And then you get into all the old issues about why did God do this particular action in the Old Testament, or get someone to do that etc etc etc... But the general answer to all of this is that God is all good and all powerful and all seeing, so interpreting what you read as if it's telling you that he's a grumpy old Jewish Thor shows you've gone wrong somewhere.

Now I know that, at this point, atheists tend to hoot with laughter and say something like: 'Well, that just shows you can read anything into the Bible.' No. It shows that 1) the Bible cannot be read without interpretation; and 2) that key elements in that interpretation are our knowledge that God is good and (from Christ) that he is caring as a father cares. And those aren't post hoc justifications to enable us to wriggle out of inconvenient truths, but are key elements of Catholicism hammered out (eg) in the disputes with Marcion about the relationship between the God of the New Testament and the Jehovah of the Old (2nd century AD) and (eg) in the disputes with Luther about the place of scripture in the Church (16th century).

2) The (apparently) Thor like god of the Old Testament has to be read in our knowledge of God gained through reason and Christ. The Bible for Catholics really really really isn't either the sole basis for our beliefs nor is it self-interpreting.

Email ThisBlogThis!Share to TwitterShare to FacebookShare to Pinterest
Labels: Aquinas, arguments for existence of God, atheism