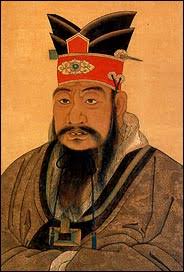 Man has received from heaven a nature innately good, to guide him in all his movements. By devotion to this divine spirit within himself, he attains an unsullied innocence that leads him to do right with instinctive sureness and without any ulterior thought of reward and personal advantage. This instinctive certainty brings about supreme success and “furthers through perseverance.” However, not everything instinctive is nature in this higher sense of the word, but only that which is right and in accord with the will of heaven. Without this quality of rightness, an unreflecting, instinctive way of acting brings only misfortune. Confucius says about this: “He who departs from innocence, what does he come to? Heaven’s will and blessing do not go with his deeds

The connection between (Greek based) virtue ethics and in particular Confucianism represents something of a minor boom industry in modern philosophy (for a fuller academic presentation, see PDF article here.) I'm not going to pretend to be on top of this area, although I have kept an interested amateur eye on it for a while.

In general terms, both Classical Greek and Chinese thought, like Catholicism, try to negotiate a path between the pre-modern sense that nature is more than raw material to be chewed up and reassembled willy nilly; and the clear intuition that not everything that in fact happens in the world of nature is good. Aristotelian thought focuses its solution on formal and final causes: the idea that there is some good towards which substances tend, but from which they can be diverted. (This approach is taken up directly in Thomism where it coupled with the Biblical idea that God has a plan which can be resisted or embraced by human beings, a thought obviously analogous to that expressed in the passage above.)

It's rather odd that, in an era where Green ideas about nature being good and even possessing some sort of personality ('Gaia') sit uneasily side by side with modernity's tendency to see nature as simply a bucket of chemicals to be used, the philosophical approach behind Catholic natural law which acknowledges the truths in both tendencies is immediately dismissed by 'right thinking' people as obviously wrong. It's particularly odd given the popularity of evolutionary psychology which likewise suggests that we cannot simply make up our lives and nature in any way we wish.

But perhaps what the West won't take from Catholicism it will take from Confucius...
Posted by Lazarus at 02:48