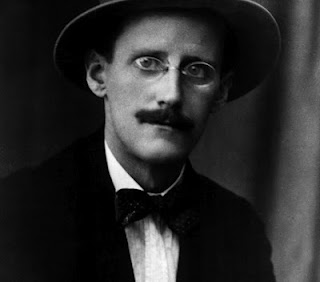 There are quite a few things that I'm embarrassed about in my youth, but very few that induce quite the same stomach clenching regret as the memory of walking around Dublin conspicuously reading Ulysses. It is a sign of the fundamentally good nature of the Irish that I survived physically intact and unmocked.

Anyway, I spent a great deal of my teenage years reading Joyce (OK, never quite managing to get through Finnegans Wake but I had a good go). For someone who never really had much contact with Catholicism as a child or youth, he was an insight into a world where religion mattered and where it was a very different sort of religion from the Jesus and rainbows watery Protestantism that you'd get at  school.

He was also an introduction to an intellectual world where the learning of the classical world and Aquinas interpenetrated everyday life. Reading Stephen Daedalus' version of Aquinas' aesthetics piqued my interest in both aesthetics and Aquinas; reading a novel which models everyday city life on the Odyssey gave me a sense of the possibilities of classical learning for the modern world. And I'm not at all sure that my understanding of Mariology doesn't owe more to Molly Bloom and her soliloquy ('yes I said yes I will Yes') than it does to any subsequent reading in Balthasar and so on.

And apart from all that, an introduction to Ireland which became an important part of my history, personal and religious. How many Catholic Scots worship in a Church built by Irish immigrants? How many of us have been ministered to by Irish priests? How many of us have Irish family? The sadness over the passing of Catholic Ireland and its scandals is for most of us more than just a grieving over a neighbour: it is a grieving over something far closer and a grieving that should come from gratitude. Let's hope that the current International Eucharistic Congress marks some sort of rebirth of orthodoxy for Irish Catholicism.

To be honest, I'd forgotten it was Bloomsday on Saturday until the trickle of mentioned celebrations in the media penetrated. It brought back memories of being a teenager and reflections on the buried roots in Joyce of my conversion to Catholicism. He didn't leave me with any immediate desire to be a Catholic, but he undoubtedly did give me a sense of intellectual and religious possibilities. As Samuel Beckett (yes, I had a teenage obsession with him too) said:

My brother and mother got no value from their religion when they died [ie the Anglican Protestantism of the Church of Ireland]. At the moment of crisis it had no more depth than an old school-tie. Irish Catholicism is not attractive, but it is deeper. (Cronin: Samuel Beckett The Last Modernist, p21).

Joyce (and Ireland) began to give me that sense of depth in Catholicism. That's not enough, but it was a start.