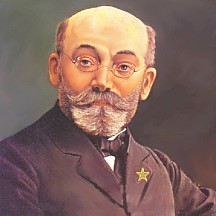 Today is Zamenhof Day when Esperantists round the world celebrate the birthday of the inventor of the artificial language Esperanto, Ludwig Zamenhof.

I can't really claim to be an Esperantist: it was something I was interested in as a teenager and can still just about make my way through a book or website in the language. (I thought briefly about trying to blog today in Esperanto but realized it was beyond me now.) It still strikes me as something of a lost opportunity (both for the world and me): it really is quite a remarkable invention with a simplicity in its design that is rather beautiful. Putting aside any fantasies about worldwide cosmopolitan conspiracies, the existence of an auxiliary language as a  means of communication that allows ordinary people to contact each other directly would be a good thing. A fascinating book, La danghera lingvo, (The Dangerous Language) describes, among other things, how Soviet Russia, having originally encouraged Soviet Esperantists to get pen-pals in capitalist countries as a way of distributing propaganda about the revolution, had to stop the correspondence when it became obvious that the Soviet workers were instead being given a direct insight into the rather better living conditions that existed under capitalism.

Anyway, did you know Vatican Radio broadcasts in Esperanto? (Three times a week according to their website.) Or that there is a International Catholic Esperanto Union? Or that there is a book called: Esperanto - The New Latin for the Church and for Ecumenism ? (English version here.) I can almost immediately hear the more suspicious among orthodox Catholics sharpening their knives at this point, and I suspect that there is indeed more than a whiff of the 1960s about some of this. On the other hand, there is also more than a whiff of self improvement and international solidarity about it too, and that's something that, despite its Communist perversions, has its good points.

Anyway, if you're really worried about international Zionist-Socialist-New-World-Order conspiracies to introduce a Newspeak, you could always try the older artificial language Volapük instead. It was invented by a Catholic priest after all...

The 'Our Father' in Esperanto: