The children's gaze and the liturgy 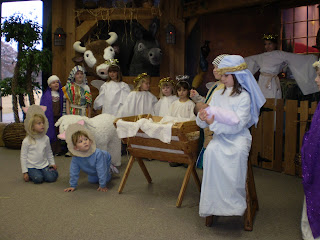 'Tis the season of Nativity plays. Well, if you're lucky. When my children were at non-Catholic primary schools, it was usually something along the line of, 'My Camel's got the Hump' or 'The Naughty Sheep': a play which gestured at Christmas themes without ever quite getting there.

Anyway, one of the pleasures of being a parent or even an indulgent uncle or friend is that you get to see the world through a child's eyes. Christmas is chock full of such moments: adults smiling benignly at children transfixed at meeting Santa or consumed by playing with a favoured toy. Admittedly these moments are often rapidly replaced by child screaming with fright at Santa or throwing the toy at sister, but still, it lasted for a moment, and for that moment, the world is seen afresh.

Quite a lot of children's Masses seem to aspire to be like that. Some of the churches we have frequented over the years have held a special children's Mass on a regular basis (and of course such Masses are an unavoidable part of life in a Catholic school). One aspect of these I was never quite sure about was the 'sermon slot' which often consisted of the priest chatting with the children. Quite apart from the liturgical propriety of this, I was always distinctly uneasy with the sense that this was really a performance put on for the benefit of the adults: instead of the priest really evangelizing the children, he was instead evangelizing the parents through the children. I'm not overly enamoured with Kant, but I was distinctly uneasy with the idea of treating children as means rather than ends...

But whatever the rights and wrongs of getting adults to see through a child's eyes in the liturgy on an occasional basis, it can't be right to do so on a permanent basis. Feminist theory over the years has made a great deal of the male gaze: roughly, the idea that much art in the western canon has been made to be seen by men (and thus either alienating or masculinizing the female spectator). Much modern liturgy seems to have been made for the child's gaze, in which adults are encouraged to see the world through a child's eyes.

Verily I say unto you, Except ye be converted , and become as little children, ye shall not enter into the kingdom of heaven.

Who knows? But just as forcing women to see uncritically through men's eyes is a bad idea, it is a bad idea to infantalize adults by forcing them to adopt the child's gaze. If anything, we should be introducing children to the adult gaze: how to see the world from a fully mature point of view. It also produces the crassness of imperfect imitation: instead of getting what a child would really see, you get an aging hippy's version of what a child might be thought to see, an imitation about as convincing as RADA educated 1930s' actors imitation of cockney: