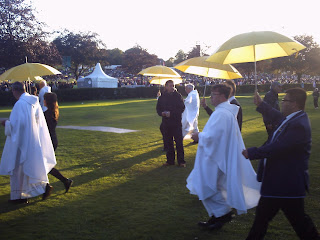 
I'd been thinking about making good my promise to say more about Pope Benedict's resignation this morning when I switched on the radio and heard:


Three priests and a former priest in Scotland have reported the most senior Catholic clergyman in Britain, Cardinal Keith O'Brien, to the Vatican over allegations of inappropriate behaviour stretching back 30 years.

The four, from the diocese of St Andrews and Edinburgh, have complained to nuncio Antonio Mennini, the Vatican's ambassador to Britain, and demanded O'Brien's immediate resignation. A spokesman for the cardinal said that the claims were contested. (From The Observer.)

'Oh what fresh hell is this?' I muttered over my toast...

I was utterly surprised by Pope Benedict's resignation and I was utterly surprised by the allegations against Cardinal O'Brien. There, I suppose, much of the analogy between the two events ends. No one has yet suggested that Pope Benedict himself has been up to no good (apart from the usual suspects) and no evidence has been provided that the allegations against Cardinal O'Brien have any basis. But they do have the connection that a) we feel an emotional connection to someone whom we don't really know very well; and b) people surprise us.

On a), the human capacity to identify with and feel an attachment to a public figure is well evidenced: Lady Gaga, Lady Di, Pope Benedict etc. It's all no doubt something to do with our nature as social beings and that propensity to philia (friendship/love) which Aristotle identifies as the foundation of human relationships. Catholicism is rather good at taking our instincts and natural appetites and directing them towards God. And so, when the wheels of the mechanism are running smoothly, we fall a little bit in love with the Pope, and the Pope gently prises away our propensities to violating the First Commandment against idolatry, and redirects our energies towards God. (And meanwhile the Dawkinsians kid themselves to be better than this, all the time worshipping their own idol, with no way of moving beyond him.)

I therefore think it's entirely natural that some Catholics have clearly felt let down when Pope Benedict resigned. My own interior life is a bit of a blooming, buzzing confusion at the best of times, and frankly I'm not sure quite what I felt: a bit of a let down, a bit of worry for him, a bit of telling myself not to be so silly. My strongest feeling just now is relief that we are simply saying goodbye to him as he departs for the Vatican monastery rather than preparing for his funeral: he is, after all, 85 and really Catholics should have been prepared for some sort of imminent departure. He has, so far as one can judge from what I have read and what I have seen, the sort of man I find easy to like: scholarly, retiring, patient...But there I go again exposing my philia.

A little of the same applies to Scotland's own Cardinal, Keith O'Brien. I confess to feeling slightly irritated at some of the reaction to his last interview, particularly from the more traditionalist Catholics: I think he was mistaken in advocating a revisiting of the rules on celibacy, but that is far from thinking that he is a heretic or an idiot or whatever... He has been a doughty fighter for the church in Scotland and deserves our loyalty, even if that loyalty does not require servile agreement to his every opinion. But again, that's philia speaking...

On to b): people surprise us. I don't really know Pope Benedict. I don't really know Cardinal O'Brien. But even those people I do know very well -friends, relations, myself- surprise us at times. I didn't expect Pope Benedict to resign. I didn't expect Cardinal O'Brien to be accused of 'inappropriate' behaviour. I don't expect these accusations to be proved. But who knows?  As I say, people surprise us and these are people that I might like to pretend I know well but really don't.

Which brings us to the photograph of the Papal Mass at Bellahouston above. At the heart of Catholicism is Jesus's death and resurrection and the daily contact with that miracle that we have in the Mass and the body and blood of Christ. Human flesh and blood will pass away, but that flesh and blood will not. Catholics are not papomanes. But there is indeed a constant temptation for the natural human tendency of love for public figures to fall into papolatry or even episcopolatry. (There is also the danger of a unreasonably negative reaction: the disproportionate hatred for a loved figure who you feel has let you down in objectively minor ways.) As in so much else, Catholics have a duty here to work on their hearts and their minds, purifying themselves of these vicious reactions and aiming for the mean of virtue: a proper love, a proper patience, a proper sorrow.

And so, so far as I can see things 'as though upon a lighted screen', the matters stand thus:

Pope Benedict had the right to resign and clearly believes it is better for the Church that he does. I certainly do not have any reason to question that judgment. So I pray for Pope Benedict. God bless him for his service to the Church and I simply would like to thank him for taking on such a herculean task for these years, and may he have a long and happy retirement.

Cardinal O'Brien has been accused of some sort of vague, homosexual inappropriateness. There is no evidence of those accusations but it would be naive to rule out completely the possibility of such accusations being true. So I also pray for him, for his service to the Church, and for the discovery of the truth in relation to these allegations. God bless him. And I also pray for his accusers, again that the truth will come out and that God will heal them, either in respect of their false accusations or in respect of the harms done to them.
Posted by Lazarus at 00:56