Sarum Use in Scotland 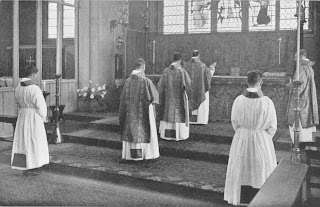 Photograph of the Sarum Use (-ish)


I'm not really that interested in the minutiae of liturgy. For a start, I have rather odd memories of evenings in a pub at university where, meeting with friends on a regular (I think) Tuesday evening, we would invariably be near a table where the 'Liturgical Society' would be assembled. Whilst we quaffed ale and discussed our chances of getting off with this or that girl (I wasn't a Catholic at that time otherwise I would have confined myself simply to composing expressions of undying love preferably in Provencal (which on reflection would probably have been rather more successful than my actual endeavours)), whispered discussions of lace and albs and cottas and sherry would drift over. It was all rather unsettling.

Anyway, just so long as I'm not subjected to clown masses or Barney the dinosaur blessing me, I'm reasonably happy. I'm also happy that others who are interested and have thought about this more deeply than I have are beavering away in getting those details right.

That said, my interest was piqued by the discussion of the Sarum Use in connexion with a Mass for Richard III, and, more particularly, with the claim (here) that there was a Use of Aberdeen apart from the Sarum Use.

So what was the state of the liturgy in Scotland prior to the Reformation? What follows doesn't attempt to do more than gather together the immediate fruits of a brief foray into the internet so that I (or others) can pick up the topic from a running start if interested. (So feel free to chip in and correct me.)

1. Sarum was pretty much standard in Scotland. I take this from a posting at Father Chadwick's Anglican blog on the Sarum Use in Scotland here.

2. To this basic Sarum Use, a number of additions had been made to reflect Scottish saints etc.

The liturgy of the Scottish secular cathedrals was probably the most confused in the Western Church. All had at an early stage adopted the widely accepted English Use of Salisbury (or 'Sarum'), though it appears that individual churches simply used whatever liturgical books they could get and some may have followed other English uses [particularly those of York, Chichester and Lincoln]. To these books, already overcrowded with the feast of English saints,   Scottish churches added those of their own local saints together with devotional practices from the Continent which were absorbed into Scottish practice more readily than in England. Since no attempt was made to provide for these additions, the result could be chaotic.

(from Galbraith, J. D., 'The Glamis Copy of the Aberdeen Breviary' , Archives, 14:63 (1980:Spring) p.141-2 [not openly available online but is available through university journal databases])

3. This hotch potch was subject to a revision which attempted to stabilize at least the breviary on a more systematic basis: a 'Scottis Use'. This was attempted by Bishop Elphinstone of Aberdeen in 1507 but seems to have failed, perhaps in part to the defeat at Flodden, and perhaps due to the unwieldiness of the Scottis Use as practised. (This is based on Galbraith 1980.)

4. It is not clear whether any attempt was made to produce a revised Scottis Use Missal along similar lines. (From Eeles, 1899 -see 5 below.)

5. A surviving Missal from St Nicholas Aberdeen seems to be from before Bishop Elphinstone's reforms and gives a sense of the chaotic state of Scottish liturgy.

In conclusion, the value of this missal to us is that it gives the old
traditional Use of Aberdeen, untouched by Elphinstone, and that it
proves that the great number of local and Celtic saints in Elphinstone's
kalendar were not of his own introduction, but the continuous tradition
of the place, continuous probably from Celtic times, though in a somewhat degenerate state. We see, too, how these saints, not being ousted
by the English kalendar, became super-imposed upon it, and brought
the Scotch services into a perfectly unmanageable state. Hence Bishop
Elphinstone's preface to the breviary, where he speaks of the legends
of the saints—quae sparsim in incerto antea vagabantur. We know that
in England at the time of the Reformation, without any great number
of local saints, " the number and hardness of the Rules called the Pie,
and the manifold changings of the Service, was the cause, that to turn
the Book only was so hard a matter, that many times there was more
business to find out what should be read, than to read it when it was
found out," so overladen had the Sarum- books then become. Add to
this a local kalendar like the one we see here, and we get some idea
of the state of the Scottish services before Bishop Elphinstone's reforms,
and probably to a great extent afterwards in many places.

We also see further evidence of the general adoption of the Sarum
books in the mainland of Scotland; but, at the same time, we find that they
were freely supplemented, not only from traditional sources originally
Celtic, but also from non Sarum books, sometimes purely continental, but
sometimes possibly what were in use in Galloway, Orkney, or the Isles.


Valle Adurni comments on a revival of the Use of Sarum in Aberdeen in 2000:

The then Bishop of Aberdeen, Mario Conti, celebrated a Sarum Mass in 2000 in Aberdeen for the University. Quite apart from the fact that the Sarum Mass was never celebrated in Aberdeen before this (as I mentioned above, it had its own rite before the Reformation), it was an interesting thing to do.

In the light of the above, I think it's a bit unfair to say that the Sarum Mass was never celebrated before in Aberdeen. The pre-Elphinstone situation seems to have been Sarum, but with chaotic additions. The post-Elphinstone situation doesn't seem that different. Accordingly, taking Sarum as the basis for a pre-Tridentine Scottis Use doesn't seem at all unreasonable.

[Update 14/7/18: Thomas Innes, ‘Note on the Sarum Use in Scotland’, in, Spalding Club Miscellany, ed. J. Stuart (Edinburgh, 1842), 364–7 internet archive here. H/T Sacred Signs in Reformation Scotland, Stephen Holmes (2015). This paper argues that the Use of Sarum was prevalent in Scotland before the invasion of Edward I and widespread (if not universal) thereafter.]

I've gone back and forth on a number of blogs here, so apologies if I leave anyone out!

Protect the Pope: Sarum Use for Richard III.

Project Canterbury: pictures of Anglo-Catholic liturgy based on Sarum.

Father Anthony Chadwick (independent Anglican): Sarum in Scotland and other posts on Sarum Use.

New Liturgical Movement also seems to contain a number of items on Sarum, though nothing specifically on Scotland so far as I could see from a quick search.
Posted by Lazarus at 01:12