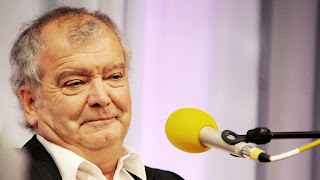 Tom Devine listening to a lemon...

In yesterday's Sunday Herald , historian Tom Devine and lawyer Brian Fitzpatrick call on the church to listen more, particularly to the young:

Most recent papal and episcopal pronouncements suggest little scope or readiness for compromise on these moral "fundamentals". Without a new pontiff somehow rekindling their hopes for change and open-mindedness, the West's most enduring institution is faced with an existential struggle if its younger members judge it not merely irrelevant but unfair. A good start might be a little more listening and a little less preaching.

Although Tom Devine has been relatively quiet on this front before, Fitzpatrick has shot his mouth off quite regularly. For example, in an article in Scottish Review, Fitzpatrick criticized Cardinal O'Brien's attitude to same sex 'marriage' and homosexuality in general:


Yet what is it that motivates this gospel of the genitals rather than the evangelising of the gentiles?
The psychoanalyst might point us to the overly strident heterosexuality of an all-male clerical cadre. But might it instead reflect a sense of corporate weakness and a lack of courage in a faltering church leadership increasingly out-of-touch with its members and which has never properly responded to the calls of the second Vatican Council for recognition of the vocation of Catholic laypeople?


One of the irony's of Devine's position is that he has (rightly) become famous for his criticism of the 'virtual universal historical illiteracy' of Scots and for his lambasting of popular presentations of Scottish history such as the BBC series 'History of Scotland':

Why do they dumb down these things? Why can’t they have heavyweights discussing heavyweight issues?

But, fair enough. Perhaps he's had a change of heart and embraced his inner Neil Oliver. I look forward to his conducting future historical research by trolling round the nation's High Schools and listening to Standard Grade pupils explaining their views on the development of the Scottish economy since 1707. Or at least a little less lecturing and a little more listening to his students (or indeed Neil Oliver).

What is forgivable in dumb non-Catholics is less so in smart (self-described) practising Catholics. Catholic moral theology is as much a technical discipline as history. There is of course a sense in which listening is important in both disciplines: it is relevant to listen to what areas of history students find difficult to grasp; equally, it is relevant to listen to difficulties Catholics have in living out to the full the teachings of the Church. But the idea that (as Devine might put it) dumbing down in either discipline is a good thing is ludicrous.

Pastor in Valle is right.

Probably the most damaging thing was not the changes made to the liturgy, but what has been called the catechetical revolution. It robbed two generations (at least) of the ability to articulate and understand their faith. It took from them a standpoint from which to assess the assertions of the newspapers, and made them prey, like everyone else, to the murky world of 'feelings' without understanding. 'Securus judicat orbis terrarum' has always been a motto that made sense in the Catholic context—it was the thing that changed Newman's life. And now, having had the wind sown for us, we are reaping the whirlwind.

That damage is evident both in the 'young people' and in theological amateurs such as Tom Devine and Brian Fitzpatrick.