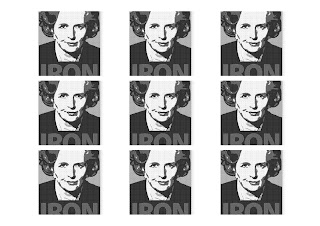 I had been fighting shy of saying anything about Margaret Thatcher, in part because I do hold by the dictum 'de mortuis nil nisi bonum', in part because my feelings and thoughts about her are confused.

So I'm going to concentrate on the representation of Thatcher, what she came to mean rather than what she can be said to have actually done. Here, her success seems to be based on an uneasy symbiosis between two elements: a Burkean traditionalism based on the appeal of little platoons (or, more exactly, little corner shops oop North); and a rampant capitalism based particularly on the financial centre of the City of London. Indeed, much of the appeal of the modern Conservative party has been based on those two aspects: a reassuring appeal to old certainties and an invigorating appeal to the creative possibilities of new wealth. Thatcher embodied the certainties, whilst the policies of her government, arguably, embodied the deracinating effects of globalized finance.

If we turn to the modern Conservative party north and south of the border, it's hard to see the embodiment of 'old certainties' anywhere in the current leadership. (That's unless you think that membership of the Bullingdon is likely to have to same popular appeal as a childhood of thrift and small town public service.)  Both Cameron and Davidson might prattle on about being conservative, but both are too clearly (and deliberately) trying to modernize the party for this to be convincing: in any case, party researchers and lesbian kickboxers just don't embody traditionalism in the same way as someone who at times seemed as though she'd just leaped out of Hobson's Choice, fresh from lecturing John Mills about the virtues of hard work and married life as a cobbler:

Does this matter? Well, I suppose the cynic in me has always suspected that the modern Conservative party has disguised the class interest of the very wealthy under a veneer of social conservatism. So maybe if they've just got less good at it, that's something to be welcomed as an increase in transparency. On the other hand, the more charitable side of me thinks there is a genuine tension between social conservatism and an efficient economy -and better that tension is acknowledged and even incarnated than that is it simply brushed under the carpet.

On my best reading of the situation, in Scotland, the difficulty was compounded by the failure of the signifiers of Thatcher's social conservatism to be recognized as such in Scottish culture. What appealed to the English as signs of a small town, Poujardist sensibility tended to be read up here as Home Counties snobbery: in any case, she was just too English and thus there was no counterbalance to the other aspect of economic radicalism. There remains no sign at all that Scottish Conservatives have developed a Scottish language in which to express the appeals of social conservatism. (In passing, I don't think you can also underestimate the effect of the Orestes complex in politics and in the media: women at the centre of controversy tend to be disliked in a much more visceral way than men. Not just a Scottish thing, though.)

So much for Thatcher the symbol. Doubtless, there will be much more careful assessment of her and her influence over the coming years, both by historians and by Conservatives desperate to restore the flagging fortunes of their party. Of Thatcher the human being, however, the occasion of death ought to provide a moment of reflection on our tiny lives, ready to be snuffed out at a moment's notice, and on the sorrow and the pity of it all. For a Christian, the only appropriate response to that is prayer: