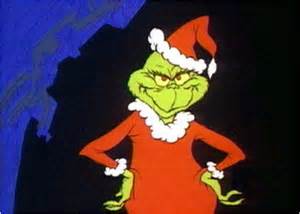 I'm sure not all atheists are unChristmas grinches, snuffling around trying to make everyone's life just that bit more difficult and a bit less interesting. But still....

Veronica Wikman has apparently started up a petition in Edinburgh to remove religious observance from non-denominational schools. Another Edinburgh parent, Gary Bennett, has in response started a petition to keep it.  The Church of Scotland has come out in favour of retaining such observance, admittedly with a description of an activity that sounds remarkably like the sort of thing Archdruid Eileen might come up with after one too many camomile teas:

The Church of Scotland supports guidance from the Scottish Government regarding religious observance in schools.

It says that religious observance events should be inclusive of all faiths and none. It should allow pupils and staff the opportunity to explore what spiritual development means for them.

This is why the Church of Scotland supports the suggestion of the government that schools should consider using descriptions such as “time for reflection” rather than religious observance in schools to highlight the inclusive nature of these events. (Full text here.)

I've talked before about how 'secularism' is rather a vague aspiration. Here, Wikman uses the term in what is rapidly becoming its default meaning: the total exclusion of religion from the public space.

Yet according to a recent YouGov poll, 63 per cent of respondents in Scotland want a secular education system, and consequently wish to see assemblies removed from their children’s education.

Now, why should the practice of religion be excluded from schools? Wikman paints a terrifying picture of young children being assaulted by the serried ranks of religionists:

Young children are intellectually immature and have open, impressionable minds. They are also socially primed to accept as fact whatever an adult in authority tells them. This means that they are particularly vulnerable to all forms of indoctrination, whether political or religious.

Religious observance has nothing to do with education, but everything to do with religious indoctrination. This is exemplified in brutal clarity by the “Light Dispels Darkness” assembly resource that seeks to condition children to develop a fear of darkness, to associate darkness with evil and discomfort and light with hope and safety. Unsurprisingly, the concept of “light” is represented by a church candle. This resource was first created by the Church of Scotland in 2007 under the title “Light Dispels Dark” and the almost identical version, mentioned above, was published by Education Scotland in 2010. 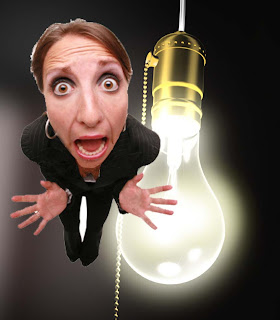 Fear of light bulbs: one of the many terrifying effects of religious indoctrination...

The full horror of this brainwashing can be found here (PDF). Now, clearly, as a Catholic, anything other than daily flagellations and autos-da-fé are going to be inadequate as forms of religious observation. But quite why Wikman think that a resource whose rationale is


Light and dark have connotations of good and evil. At many levels, we
face light and dark daily. A confident, optimistic, energising attitude
requires hope. Hope is born when we recognise that light dispels
darkness

and where absolutely no mention is made of God or Jesus is indoctrination rather than a fairly harmless form of blethering is beyond me.

Any communal activity involves chafing. When my children attended a non-denominational school, we had regular conversations along the lines of, 'Well, they're telling you this because they think x, but as Catholics we think they're wrong and that y is the correct position.' One of my children was made to 'feel anxious and left out' when his primary school teacher told him that Christian Churches didn't have tabernacles. (Actually, he couldn't have cared less although he was a bit mystified. We simply explained that a) the teacher probably wasn't familiar with Catholic practice; and b) Protestants didn't have the same understanding of Communion because.... And that was all
fine.)


There is a more serious point behind all this. How do we establish public spaces in our schools where we actually do and say things (rather than avoid everything except an eight hour silence) and yet allow all children to be included? Wikman like fellow members of the National Secular Society assumes that the best public space is one where religion is excluded. But there's little reason to believe (unless you suffer from Wikman's apparently morbid fear of light) that the sort of milquetoast Protestantism on offer from the Church of Scotland isn't rather better at providing a public meeting space than Wikman's hypersensitive atheism. Scotland for the past 1500 years or so has been a Christian country. For the past 500 years or so, it has been a Protestant and Presbyterian country. To exclude that reality from schools is to diminish children's access to the past, and to diminish their flourishing.

That said, there clearly is something wrong with the Church of Scotland's current efforts. So let me make the following suggestion. As is well known, the blessed Richard Dawkins is in favour of the King James Bible being familiar to our children. I'm sure that, if he thought about it, he'd also be in favour of the Scots Metrical Psalter for similar cultural and historical reasons. So why not make the 'time for reflection' a sandwich of readings from the KJV and a couple of psalms from the Metrical Psalter? This would clearly satisfy everyone. Wikman and co would be able to regard this as simply a familiarization with the native mythology of Scotland and explain it as such to her photophobic offspring. Protestants would be able to regard it as a propaedeutic to worship: not quite the sort of thing that would exist in an ideal Christian commonwealth, but still a lot better than the alternative of pretending that Scotland's roots in Christian culture didn't exist or that worship is adequately characterized by lighting a tealight and humming kumbaya.

It would, of course, not exactly satisfy either atheists such as Wikman or Catholics such as myself. But, hey, as I said, communities chafe. I'm sure she'd be able to cope by introducing her child to her rightful inheritance as an atheist of regarding religious believers as a form of pond life that the Great Leap Forward of enlightenment will soon abolish, just as we coped by explaining to our children that not everyone is a Catholic and not everyone thinks the same thing about religion. In the meantime, all sets of children would be being familiarized with important aspects of Scotland's literary and musical culture.