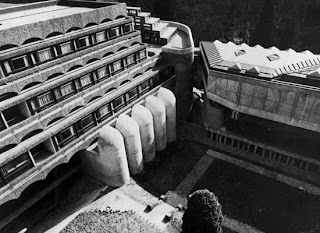 Rather an interesting programme from Radio 4 about the Scottish architects, Gillespie Kidd & Coia, who were responsible for many modernist churches in Scotland, as well as the notorious St Peter's Seminary in Cardross. (Radio programme archived here -I assume available for at least the usual 7 days (ie until 14/04/13).)

Now that Easter and the papal election and the 'retiral' of Cardinal O'Brien have receded a little into the past, I suppose we really do need to think about how we should react to the Church crisis which may not really be a crisis after all. I posted previously about the need for 'solutions' to be accompanied by some explanation of how they're supposed to work and what they are aimed at. I also suggested that the main crisis in Scotland and elsewhere in the West is not some minor detail of administration or discipline, but the general issue of secularization and the Church's relationship to modernity. Pope Francis' election has provoked some spluttering in the more traditionalist corners of the Catholic blogosphere simply on the grounds that it is entirely clear that in 'style' (eg what shoes he wears and what type of cross he carries) he isn't a traditionalist. The anxieties this provokes are either that, very directly, such a lack of attention to tradition is part of a carelessness about liturgy which is central to the Church's failure to withstand secularizing modernity, or, less directly, that carelessness about inessentials is suggestive of a carelessness about other, more important aspects of Catholicism.

Putting that aside, the issue of modernist Church architecture in Scotland strikes me as a good concrete issue on which reflection may well provide a rather deeper insight into central issues.  I confess (as in so much else in my life) to being pulled in various ways on this. Tell it not in Gath (or Cumbernauld) but I'm quite fond of brutalist architecture. On the other hand, I'm allergic to those sorts of felt banners with designs that seem to have been made by the P3 embroidery class that infest many Scottish Churches, not to mention polyester vestments and liturgical dance. If you suggest to me (as one of the speakers on the radio programme does) that there is in principle a tension between on the one hand the desire of modernist architecture to strip out both meaning and the past and on the other hand the mission of the Church, I can see your point, but still.... Just not sure.

Linda Woodhead  (about 24 minutes into the programme) attempts to impose a narrative on the initial popularity of Gillespie Kidd and Coia with the Scottish Church and its subsequent fall from grace (ie the work dried up) as one of a failure of confidence: Vatican II opened things up, but the Church got frit and retreated to its bunker. Given that Woodhead goes on to say that the main problem for architecture is working out how to accommodate post-Christian spirituality in a built form, you can see that her agenda might well not be that of Catholicism. One point she misses is that modernist architecture has become generally unpopular: it is not just the Catholic Church which has rejected it, but also mainstream (ie secularized) society as well.

Some photos of GK and C buildings: here  and here.