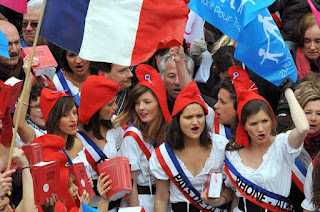 The very public French opposition to SSM has provoked some anguish among the bien pensants (ie the sort of anglophone who is enough of a plonker to drop French terms into a blogpost).

David Bell suggests that it's the result of a commitment of French feminism to sexual complementarianism:

An important current of French thought, which has no real American equivalent, has maintained that while women deserve equal rights, these rights must not entail the supposed erasure of sexual difference. (Full article.)

Whilst such a viewpoint seems totally reasonable to homophobic sky-fairy-worshipping-cretins like myself, to the Brights it is a sign either of mental illness or not being American (much the same thing of course):


Though abstruse by U.S. standards, the debates reflect deep anxieties felt by French elites. Not only has France’s geopolitical position slipped and its previous cultural eminence sharply declined -- this May, the National Assembly even approved a measure allowing university courses to be taught (quelle horreur!) in English -- but the ideological causes that once mobilized large portions of the French population have largely evaporated. (French Marxism is not even a shadow of its former self, and little daylight shines between President François Hollande’s Socialists and the neo-Gaullist Union for a Popular Movement, or UMP, party.)

Many influential French figures, including a good number of former Marxists, have taken refuge in a sort of cult of French national identity. One pillar of the cult is the Republic, with a capital R, which they associate with strict civic equality, even stricter secularism in public life, and educational institutions capable of molding a single, cohesive citizenry. But another pillar is the idea of France as the homeland of sophisticated habits, taste, and culture, which in turn depends, as many intellectuals explain, on the romance, beauty, and mystery generated by the play of sexual difference. In 2011, this position initially, and embarrassingly, led a good number of intellectuals to defend Dominique Strauss-Kahn, the International Monetary Fund chief and presidential hopeful, as a gallant “seducer,” rather than a sexual predator, after a New York hotel employee accused him of rape.

This strong emphasis on the complementary roles of men and women has had a remarkable effect on the French marriage debate. Unlike in the United States, most opponents of marriage equality have had relatively little to say about the morality of homosexual sex acts, or about threats to the “institution of marriage” in general. Instead, they speak above all about children, insisting that a psychologically healthy family life rests on the union of a man and woman. Back in 1999, when the French Parliament approved a form of civil union, much of the opposition centered on this issue.

I'm not going to pretend to be an expert on the current state of French feminism. However, Luce Irigaray, of whom I have read a little, certainly does emphasize the differences between men and women -but so of course did many anglophone second wave feminists such as Andrea Dworkin and Mary Daly. Anyway, if it's true that modern French feminism remains influenced by sexual essentialism -and Jon Cogburn (to whom I offer a H/T for the Bell article) rightly wonders whether it really is- then I suspect the reasons lie not just in feminism but in deeper differences between the construction of the individual in a post-Catholic culture and a post-Protestant one: roughly, that Protestants will tend to see the individual as a pure agent, while Catholic cultures will tend to see the individual as embedded in various identities.

Anyway, odd to note that a view which is quite clearly and undeniably true -that men and women are essentially different in a number of important ways- is ridiculed by both Bell and Cogburn. If the French have managed to avoid this nonsense, good for them. It would be nice to think that the influence of the Auld Alliance stretched to such beneficial cultural influences, but I won't be holding my breath.
Posted by Lazarus at 05:23